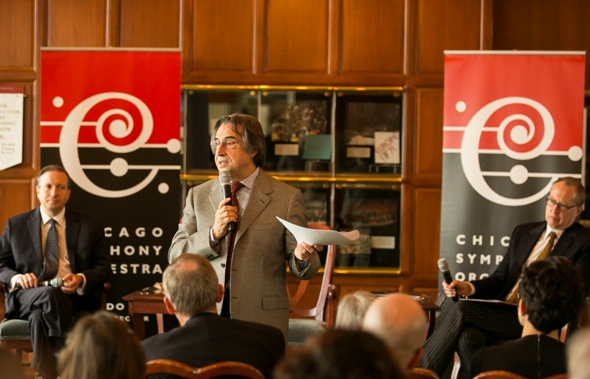 Report: To celebrate its 125th anniversary in 2015-16, Riccardo Muti’s sixth season as music director, the Chicago Symphony announces 125 free concerts and 26 commemorative repeats of premieres by the CSO since its founding in 1891. Muti-led tours of the U.S. and Asia are also planned.

Midway through a music directorship that will extend at least until 2020, Riccardo Muti on Jan. 26 shared a wish list of sorts for the Chicago Symphony Orchestra, his artistic home for 15 weeks a season.

Speaking at a Symphony Center press conference, where details of the 2015-16 season were released, Muti expressed a three-fold desire to increase connections with Chicago’s many ethnic communities through neighborhood events, press forward with cutting-edge multimedia recordings and live-from-Chicago events that can reach a worldwide internet audience, and widen the CSO’s touring horizons beyond the U.S. and Europe to include newly open Cuba and “all the East, which is the future.” 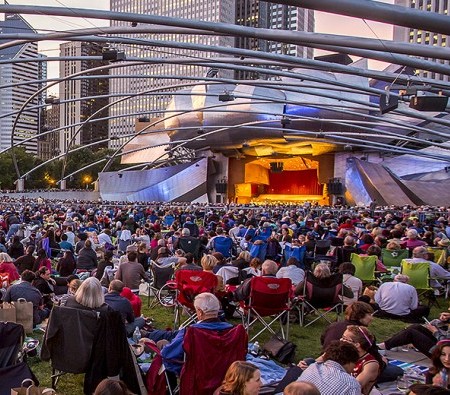 125 free events: The plan calls for 125 free concerts in locations throughout Chicago next season – a riff on the CSO’s 125th anniversary –  as part of the Citizen Musician initiative headed by CSO creative consultant Yo-Yo Ma. The kickoff is a “no-ticket-required” Millennium Park concert Sept. 18 on the Pritzker Pavilion’s Great Lawn , where Muti will conduct Beethoven’s “Leonore” Overture No. 3 and Mahler’s First Symphony. Additional events will be posted as they are announced at cso.org/125.

International push: The Chicago Symphony was founded in 1891 by Theodore Thomas, America’s first great conductor, lured from New York City by a Chicago businessman who took Thomas up on his famous remark, “I would go to hell if they gave me a permanent orchestra.” Thomas established the orchestra’s high standards early, and its eminence has been consistently recognized through the decades. “But we should not sleep. There is a saying in Italy, ‘If you sleep you don’t (catch) the fish,'” Muti said by way of outlining his vision for solidifying and expanding the orchestra’s worldwide profile.

How the Chicago Symphony Orchestra is perceived in Chicago is important, the maestro said, but so is its reputation in the world. “If the world sees (concerts) live from the Berlin Philharmonic, live from Vienna, but they do not see this from Chicago, then the quality will go down, and the morale will go down, and the orchestra will go from great, to excellent, to very good to good,” he said. “The new chapter for the next five years must be in this direction.” 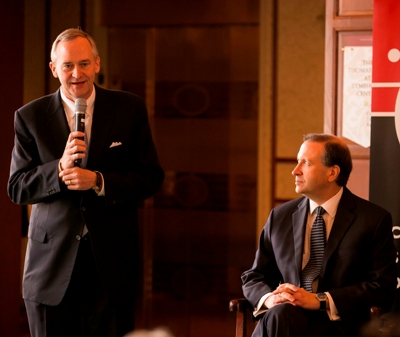 Financial challenge: Such Big Thinking requires a business plan, and the CSO Association is in a state of considerable transition, with its new president, Jeff Alexander, in place for only a few weeks and other top positions just now being filled. The CSOA closed last season with its fourth annual deficit in a row — $1.4 million on a budget of $78.1 — hardly stunning, but a nagging trend as expenses continue to outpace revenue. Alexander and CSOA board chairman Jay L. Henderson (vice chairman for client service at PricewaterhouseCoopers LLP), were both present at the season announcement and remained largely silent for what was clearly intended to be Muti’s show. Yet the CSOA has already received multi-million-dollar gifts from Helen and Sam Zell and the Negaunee Foundation that support the maestro’s objectives.

Meanwhile American arts organizations, mindful of the international promise inherent in live cinecasts, satellite radio and web-based producing platforms such as medici.tv, are becoming increasingly vocal about the need to address the creative rights, labor and technical hurdles that stand in the way of reaching global audiences. Muti made it clear he will be pushing, arguing that Chicago is a city “with potential much bigger than what the city thinks. New York is New York, it is itself. But for Europe, Chicago is a sort of symbol of the U.S. It is a strong, American city, and very beautiful.” 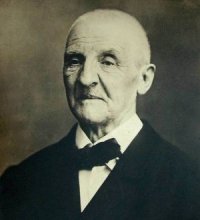 In with the old: Since 1891 the CSO has given  more than 650 U.S. premieres and world premieres, but the idea of focusing on 26 of them during 125th anniversary season came up almost by accident as Muti and his artistic team scrambled to fill various programming slots after the departure last August of the orchestra’s longtime vice president for artistic planning and audience development, Martha Gilmer.

Program annotator Phillip Huscher said that he brought armloads of CSO scores to Muti and the concept of special commemorative revivals was born. True to his Italian nature, the conductor became intrigued by French composer Gustave Charpentier’s “Impressions of Italy,” which received its CSO premiere in 1893; and Alfredo Casella’s Symphony No. 3, which the CSO commissioned and introduced to the world in 1941. (Casella is perhaps best known today for his successful mid-century efforts to revive the popularity of Vivaldi.) Muti will perform both works in 2015-16 — the Charpentier Sept. 24-29 and the Casella Feb. 18-20, 2016. He will also close the season June 23-26, 2016, with two works by Anton Bruckner, a composer particularly close to Muti’s heart. Bruckner’s “Te Deum” had its U.S. premiere in Chicago in 1892, and his Ninth Symphony was introduced here in 1904. 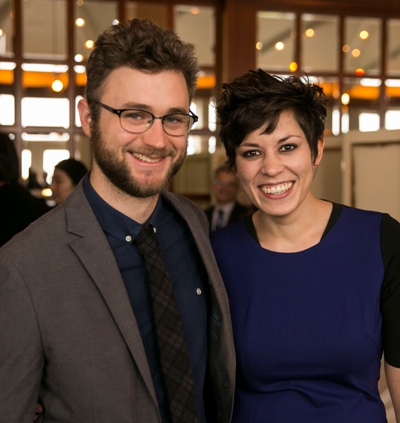 In with the new: Although Muti acknowledged that he is not personally focusing on what he described as an overwhelming international abundance of contemporary music, most of which he suggested is best left to other conductors, he did introduce two young composers very much of the moment whose works he has promised to perform over the next two seasons. They are Minnesota-born Elizabeth Ogonek, whose newly commissioned work will be undertaken by Muti and the CSO in February 2016; and Bay Area native Samuel C. Adams, whose “Drift and Providence” was given by Michael Tilson Thomas and the San Francisco Symphony in November at Carnegie Hall. (Adams is the son of composer John Adams and photographer Deborah O’Grady.) Samuel Adams has been commissioned to write a work for the 2016-17 season. 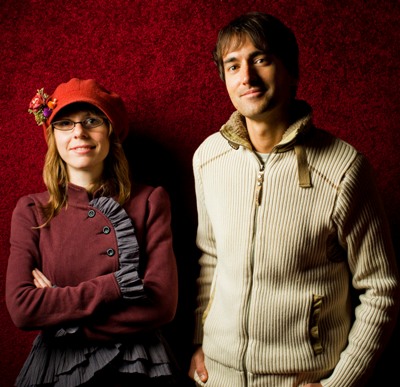 Muti said he selected Adams and Ogonek from more than a dozen candidates to succeed Mason Bates and Anna Clyne, both coming to the end of their terms as composers-in-residence. Both have flourished internationally and, not incidentally, have won a loyal local following as curators and emcees of the orchestra’s MusicNOW series, which enlivens certain Monday nights at the Harris Theater in Millennium Park. Ogonek and Adams have been specifically charged with the responsibility of curating that series.

Among the handful of new works to be performed in the 2015-16 season are Clyne’s “Masquerade,” a five-minute concert opener that was given its world premiere on the last night of 2013 Proms in London, and composer-conductor Esa-Pekka Salonen’s “Foreign Bodies,” a substantial 20-minute work for large orchestra that he wrote during his sabbatical from conducting in 2000.

Verdi-Shakespeare cycle: Recognized as one of the greatest living interpreters of Verdi’s work, Muti plans to complete his traversal of Italian composer’s Shakespeare-inspired operas — which included “Otello” in 2011 and “Macbeth” in 2013 — with three performances of “Falstaff” on April 21-26, 2016. One of the performances will fall on April 23, which is the 400th anniversary of the Bard’s death. Baritone Ambrogio Maestri, a much-acclaimed Falstaff who made his role debut at La Scala under Muti nearly 15 years ago, is to sing the title role. Although the other two Verdi operas were taken to Carnegie Hall, Muti noted with some vexation that there will be no hat trick, the reasons for which may be lost in the fog of administrative transition. (Sir Georg Solti and the CSO took “Falstaff” to Carnegie Hall in 1985 and the Minnesota Orchestra has done it there since.) 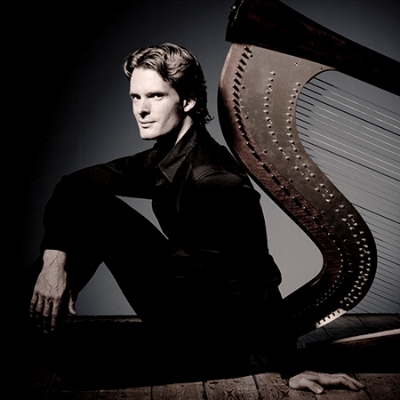 Five Muti residencies: The conductor’s 15 weeks with the CSO include 11 weeks in Chicago, dispersed throughout the season in September, October, December, February, April and June. He is to start with a series of single concerts in mid-September — a subscription concert Sept. 17 at Orchestral Hall with Beethoven’s Fifth Symphony; the free concert at Millennium Park Sept. 18, and a symphony ball gala fund-raiser with Mussorgsky’s “Pictures at an Exhibition” on Sept. 19. The weekend of Sept. 24-29, Muti will perform Ravel’s “Boléro” and introduce a French virtuoso of the harp, Xavier de Maistre.

The 44-year-old Norwegian pianist Leif Ove Ansnes. one of the most gifted musicians of his generation, will join Muti Oct. 1-3 to perform Mozart’s Piano Concerto in D minor, K. 466. On the program is  one of Muti’s commemorative revivals, Prokofiev’s “Scythian Suite,” which has an unusually curious history: Prokofiev wrote it in 1915 as a ballet for Diaghilev’s Paris-based Ballets Russes, but the piece was soon embroiled in politics of every sort. First, the temperamental ballet impresario rejected it, so Prokofiev turned it into an orchestral suite. Next, with World War I underway, a Moscow performance of the suite was cancelled at the last minute when too many of the performers were called to the front.  Finally, musical politics played its own role, because even though the concert did not happen, the piece was reviewed — scathingly — by musicologist Leonid Sabaneyev, not a fan.

Later in the season, Muti’s Dec. 3-5 visit will bring his 250th performance with the CSO and feature the Russian composer Alexander Scriabin’s “Prometheus: The Poem of Fire,” which had its U.S. premiere at the hands of the CSO in 1915.  Muti’s two February 2016 programs include the Casella symphony and other Italian works, two April 2016 programs develop the Verdi and Shakespeare themes, and the June concerts mark a celebration of Beethoven and Brahms in addition to the Bruckner revivals. 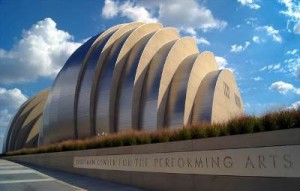 U.S. and World Tours: Muti’s tour plans with the CSO include a three-week tour of Asia in January 2016 — which would have been his return visit with the CSO to that region, but the 2013 Asia tour took off without him when the maestro was sidelined by emergency abdominal surgery. Stops will include Taipei, Tokyo, Shanghai, Beijing and Seoul. In October 2015, Muti will undertake a U.S. tour including visits to Kansas City (which has won praise for its new performing arts center), Chapel Hill, N.C. (for the first time), and the University of Michigan in Ann Arbor (a frequent stop).

Guest artists: Muti said he has been working to persuade former CSO music director Daniel Barenboim to come back to the CSO for a visit, and that he has been in touch with Dresden Staatskapelle chief conductor Christian Thielemann, whom he admires, implying that engagements by these top-echelon conductors will be eventually forthcoming. 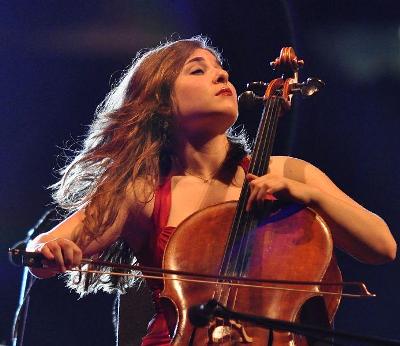 Andrew Davis, the Lyric Opera’s music director and principal conductor, has been snared for a one-night only special performance with Russian pianist Evgeny Kissin, who will play Tchaikovsky’s First Piano Concerto (Oct. 15). The program will also include Davis’s own arrangement of Bach’s mighty Passacaglia and Fugue in C minor. Russian conductors Gennady Rozhdestvensky (Feb. 5-6, 2016) and Yuri Temirkanov (March 24-26, 2016) will both be returning to the CSO for the first time since 1999 for programs with a Russian emphasis. 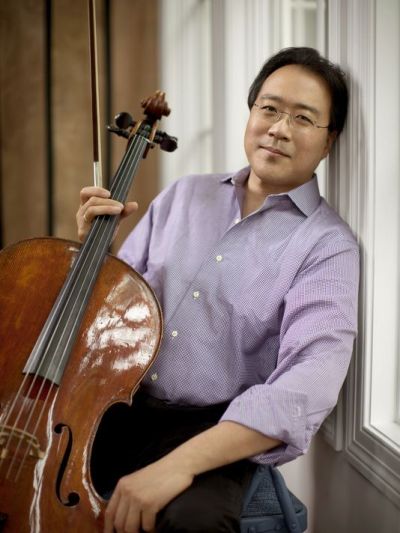 Russian pianist Denis Matsuev will perform the famously difficult Rachmaninov Third Piano Concerto on Temirkanov’s March program. American cellist Alisa Weilerstein is bringing a new cello concerto by the French composer Pascal Dusapin (May 27-31, 2016) on a program that also includes Holst’s “The Planets.” (Dusapin’s violin concerto, “Aufgang,” was performed by Renaud Capuçon as part of the grand opening of the new Philharmonie de Paris on Jan. 26 and is available for viewing on medici.tv.

The CSO’s principal bass player, Alexander Hanna, who joined the orchestra in 2012, will make his solo debut with conductor James Conlon, performing the virtuosic double bass concerto of Johann Baptist Vanhal, who is little known today but was a fixture in the Vienna circle of Dittersdorf, Mozart, Clementi and Haydn (Dec. 17-19). And many popular artists will return, including pianist Jeremy Denk (March 10-15, 2016); violinist Julia Fischer (June 16-21, 2016) and cellist Yo-Yo Ma (Feb. 25-March 1, 2016).

Concerts and tickets: Most of the conductors, soloists and music for the CSO subscription season, beginning in September 2015, were listed in detail, with somewhat sketchier line-ups for the many family, holiday, chamber music, jazz, Beyond the Score and MusicNOW events slotted on the calendar. The information is available as an interactive brochure and as a downloadable document. The CSO has also updated its website calendar to include most ticketed events of the 2015-16 season. Subscription packages are on sale now, but single tickets do not become available until Aug. 7.