What good is sitting alone in your room? Willkommen to a beautiful, bleak ‘Cabaret’ Review: “Cabaret,” with music by John Kander, lyrics by Fred Ebb, presented by Broadway in Chicago at PrivateBank Theatre through Feb. 21. ★★★★★

If there are two words not commonly associated with touring Broadway shows, they are daring and courageous. Both apply in stunning fashion to “Cabaret,” a not-to-be-missed experience presented by Broadway in Chicago at PrivateBank Theatre.

Not to be missed, anyway, by viewers of a certain maturity. This gritty, explicit summoning of the cabaret scene in 1930s Berlin is not for the kiddies. Leave them at home in wholesome care, but by all means, Meine Damen und Herren, Mesdames et Messieurs, Ladies and Gentlemen, come hear the music play. Whether it’s exactly a holiday, well, that’s where we get to the daring and courageous parts. This production from New York’s Roundabout Theatre Company is one darkly existential and ringingly authentic take on Kander and Ebb’s sardonic musical.

I should say up front that there is no nudity in the show, just lots of stylized, exuberant perversity and a lot of leg. The girls are beautiful, the band is beautiful (and terrific), even the Emcee is beautiful. I would go back just for Randy Harrison’s wickedly funny turn as the Emcee at the Kit Kat Club, the cabaret that provides our window into the Nazi rise and, with it, the ethical debasement of German society.

This “Cabaret” is great theater. It plays out mainly on a two-level club set that contrasts skewed glitz with shadows. The show’s seemingly endless string of wry, satirical songs and production numbers is wound tightly around the core narrative of an aspiring American novelist (the persuasively innocent and appealing Lee Aaron Rosen) who lands in Berlin as an impecunious dreamer just as the Nazis are gaining strength.

He meets a German chap with a friendly smile (Ned Noyes) who steers him to cheap accommodations run by a proper German lady (Chicago actress Shannon Cochran). The friendly German, who is into a bit of smuggling on the side, also urges the American writer to check out the Kit Kat Club, where he meets the star attraction, British ex-pat, chanteuse and good-time girl Sally Bowles (Andrea Goss). 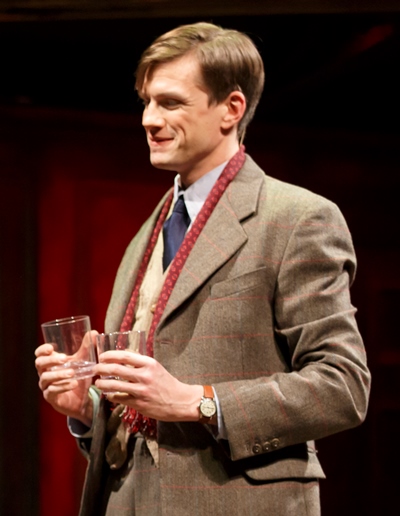 What follows is a story of caroming, sometimes dangerous relationships that reflect the political upheaval outside, a world whose ugliness progressively seeps even into the fabric of the Kit Kat Club.

But an ominous tectonic shift, a profound disturbance in the moral force, resonates in the Emcee’s sobering anthem “Tomorrow Belongs to Me,” which returns as a public embrace of Nazi nationhood. And then comes the exclamation point, one of this show’s most unnerving vignettes, played against the harassment of Jews on the outside – the Emcee’s affectionate dance with a frilly-dressed gorilla to the song “If You Could See Her” (through my eyes): She wouldn’t look like a German who isn’t really German, at all! Harrison is brilliant as the rascally Emcee who has no moral compass, whose taunting jibes pander to public whim. But nobody keeps the upper hand in these times, no one can stay forever one jump ahead of the rising tide. I said this show displays rare courage for a commercial enterprise: That display comes at the end, not in a grand unfurling of Nazi banners but in something even more arresting – at the very end, just when the audience wants to burst into applause but suddenly finds itself so stunned that it can barely clap. I was numb in my seat.

Beneath its brash, defiant surface, “Cabaret” is indeed a grim story, rather like “Sweeney Todd” on an epic scale. Its devastating truth transcends the fleeting affair between the American writer and the desperately amoral Sally Bowles; its real center is the tragic relationship between the American’s spinster landlady Fräulein Schneider and Herr Schultz (Mark Nelson), a widower who owns a fruit market and joyfully, adoringly supplies the lady with his succulent produce.

Cochran’s Schneider is a lovely, compassionate, needful woman, but also a sober pragmatist. Nelson’s Schultz is the soul of a gentleman, but lonely and so admiring of this woman. She is a safe from the Nazis; he is not. He waves the danger off. He’s seen these political movements come and go. This, too, will pass. You can trust him on that. The tragedy is written in the signs: Schneider reads them clearly and concludes that standing too close to Herr Schultz is not a good idea. Even in her eyes, Schultz no longer looks German at all.

When Sally Bowle’s big number, “Cabaret,” finally comes up, near the end, you think OK, the slam-bang finish that turns this thing around. Far from it. Goss grinds those words out: “Life is a cabaret, old chum…It’s time for a holiday…” She belts the pain – of loss, of being lost. No defiance here, just dripping, bleeding irony.