‘The Whale’ at Victory Gardens: A daughter’s outsized rage, a father’s thin hope of grace

Review: “The Whale” by Samuel D. Hunter, at Victory Gardens Theater through May 5 ★★★★

Every person watching the play must feel something in common with Charlie, the 600-pound middle-aged man who occupies much of the stage and certainly the central place in Samuel D. Hunter’s “The Whale” at Victory Gardens: Like him, we find it hard to look into the pain-ravaged heart of his 17-year-old daughter. 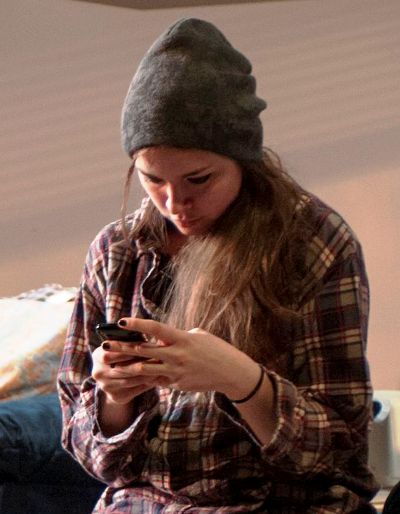 Beneath that morbid obesity, Charlie – Dale Calandra padded up to a nearly inert mass – is just a guy, a dad, a teacher who communicates better with his students than he ever has with his daughter. Now, in what should be his prime, he’s dying of congestive heart failure. There are things he wants to fix while he still can. He doesn’t want his life to end as a tragedy. Therein lies the elegance, truth and hope of Hunter’s beautifully made play.

The book of Charlie’s life is a lexicon of bad stuff. He is stamped with personalized definitions of suffering and loss, error and regret, loneliness and sorrow. But he’s also a tome of positivism. Virtually immobile, he earns a living as an Internet writing tutor, and he’s devoted to helping his young charges rise above their terse displays of ineptitude.

Charlie simply doesn’t complain. Despite the increasing difficulty he has merely drawing breath, he never has a morose word for his visiting nurse Liz – the spunky, acid-tongued Cheryl Graeff. His refusal to take care of himself properly or go to the hospital (because he has no insurance) drives Liz nuts. But otherwise, Charlie just keeps plugging, and inching closer to death. 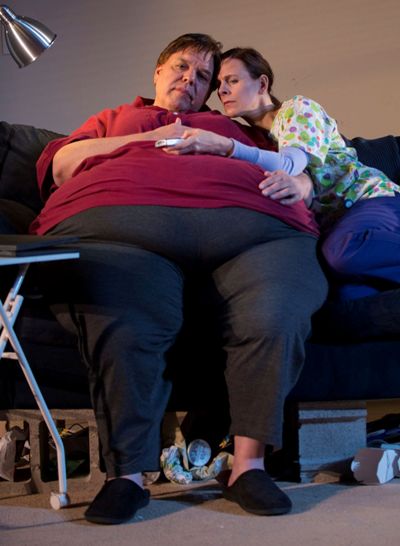 The slowing beat of Charlie’s existence is disrupted by two arrivals: his daughter Ellie (Leah Karpel), a high school senior volcanic in her anger, spiteful toward the world and closed to all caring, and a buttoned-up young man who will identify himself only as Elder Thomas, a missionary for the Church of Jesus Christ of Latter-Day Saints — a Mormon, portrayed with zealous optimism by Will Allan.

Thus is the table set for the extended finishing drive of a smartly crafted, articulate and affecting drama that holds one spellbound over an unbroken course of 110 minutes. In set designer Chelsea Warren’s claustrophobic living room, the cluttered roost of a suffocating man, unfolds a last gambit for redemption.

Charlie wants desperately to reconnect with his daughter, whom he hasn’t seen since her infancy. She is the offspring of a time when he was a large man but not yet grotesque – a time before Charlie fully understood and embraced the fact that he was gay. He ballooned later, in misery and heartbreak, after the death of his boyfriend – also a Mormon.

While Charlie has unresolved issues touching on his lover’s religion, he doesn’t make jokes about it. But nurse Liz, yet another Mormon (or rather a fallen one), does. Cheryl Graeff’s ironic fusillades leveled at Allan’s utterly disarmed Elder Thomas inject riotous comedy into a narrative that is not going to end in laughter. Allan brings to this over-determined straight-man an implicit complexity that’s revealed with increasing clarity.  Thomas proves to be both bearer and recipient of grace. 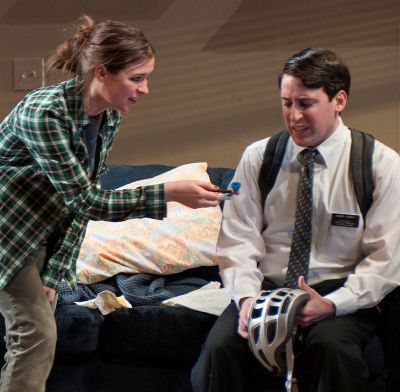 The play’s title is double-hooked, referring at once to the outsized form beached before us and to the iconic creature of Herman Melville’s “Moby Dick” – the subject of student essays now under Charlie’s evaluation, and indeed of one written some years before by his daughter.

What Charlie wants of his students is simplicity, directness, honesty, the very qualities that allow one to know oneself. At a certain point, he calls a halt to his own conventional requirement of rewriting and refinement: Just tell me what you think, he says in essence. Tell me what you connected with, what was boring, what you loved, what you hated. Just spill it out.

Calandra’s Charlie embraces us with exactly that full measure of honesty, and so, crucially, does Karpel as his daughter. There is no bottom to Ellie’s anger, and there are no borders. Karpel expresses the girl’s elemental rage at a depth and compression of consuming intensity, beyond words. If Charlie’s wisdom is born of a life lived, her fury has filled up the void where nurturing love should reside. If his time is expiring, so is this girl’s hope.

The final scene between father and daughter is a long crescendo, played exquisitely by Calandra and Karpel and given wing by the same imagination and sensibility director Joanie Schultz brings to the whole enterprise. It is charged with almost unendurable pain consummated in a spirit of nearly intolerable luminance. 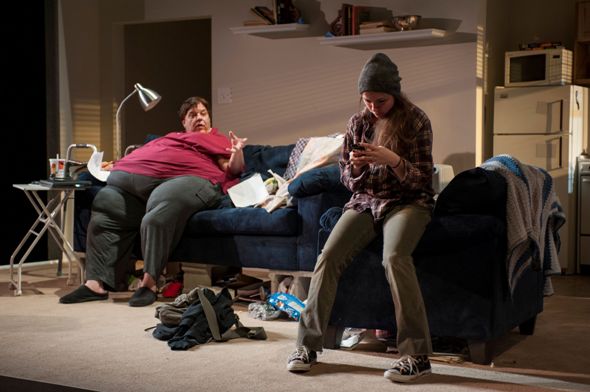