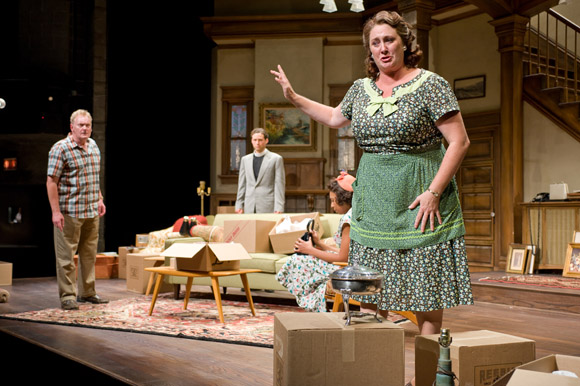 In the hurlyburly of Bruce Norris’ double-edged play at Steppenwolf Theatre, about the changeable face of cultural bias, Fitzgerald portrays a grieving mother in 1959 and a self-interested lawyer in 2009.

Amid the tumult times two that is Bruce Norris’ play “Clybourne Park,” now on the boards at Steppenwolf Theatre, Kirsten Fitzgerald is on the inside looking out. Like her five fellow actors, she plays two radically different roles as the story leaps forward from its opening in 1959 to its conclusion in 2009. For the troupe working under director Amy Morton, it’s a theatrical tour de force that Fitzgerald likens to acting in two different plays the same night. 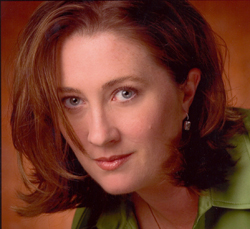 “Clybourne Park,” set in a Chicago neighborhood, is about the shifting ground of cultural and racial bias, the relativity of values and the adaptable meaning of tradition. In 1959, a couple in an all-white community sell their house to black people, sparking a desperate attempt by their neighbors to scotch the deal. Fifty years later, when the same neighborhood has turned all black, a white couple who have bought the same house – to tear it down and replace it with a larger structure – are under scrutiny by blacks concerned about preserving the scale and feel of the place where they’ve grown up.

In the first act, Fitzgerald portrays the distraught woman whose husband has insisted they sell and move to the suburbs. Their son, returned from action in the Korean war, has killed himself in this house, which now resonates with pain for both of them. At first Fitzgerald’s character, called Bev, doesn’t understand that the buyers are black.

In Act II, Fitzgerald plays a real estate lawyer sitting in on what begins as a rational, mutually respectful discussion between the young white couple who have just acquired the house and a young black couple who want to make sure the old feeling of the neighborhood is not violated by an outsized new house.

Fitzergerald, a Chicago stage veteran who’s also artistic director of A Red Orchid Theatre, succinctly summed up the play’s contrasting chapters: “The first act has a clear beginning, middle and end,” she said. “The second simmers, then explodes.” It’s that emotional upheaval and meltdown of civility that looks like the trickier business to bring off. But from Fitzgerald’s perspective, the compressed madness – the ugliness that dare not speak its name – of Part 1 poses the greater challenge.

“As we worked through rehearsals, it became really clear that Bev is on the verge of hysteria for the entire act, the entire hour,” said Fitzgerald. “She’s filled with dread and worry. She has been living with this terrible grief over her son, and she needs for things to be OK. So she holds onto things like manners.

“One of the things really frightening to her is the idea of moving to the suburbs, where she has no friends. It’s not hard to imagine a situation where she becomes very lonely and starts drinking.”

While her friends are getting into a froth over the prospect of black people moving in, Bev barely connects with the sense of crisis, says Fitzgerald. “My hot-button issue (as Bev) has more to do with the death of my son and my loss of community through that. The reality is that I’m fighting to get back to some sort of normalcy. If having (my black cleaning woman) Francine as my neighbor is the outcome, I’d be just fine with that.

“When Bev actually comprehends the notion of a black family moving in, she’s shocked, too – and suggests that maybe they’re Mediterranean or Spanish. On some level, she’s saying they deserve a chance, too.”

Though Fitzgerald and director Morton are fixtures in Chicago theater, “Clybourne Park” marks their first time working together.

“Amy is really good at sharing ideas and at the same time nudging or pushing actors to try things,” Fitzgerald said. “Her direction is very clear, but she would also throw something out there in great detail, then say, ‘Good luck with that.’” 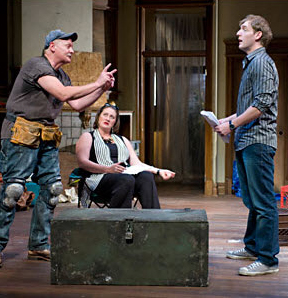 In Act II, Fitzgerald inhabits an altogether different persona.  It’s 2009 and she’s Kathy, a lawyer who’s consulting with the white couple who now own the house. Kathy doesn’t have all that much to say, but readily jumps in when she sees a chance to talk about herself.

“She’s a little oblivious and not really worried about communicating,” Fitzgerald said. “If it’s not about her, it’s not that important to her. She only perks up when somebody raises an issue that has to do with her. ‘Let’s talk about me going to Mexico.’ The challenge for me here, playing this character, is to stay focused when I don’t have anything to say for a long time – which is not the same thing as making the character appear to be engaged all the time. She isn’t. But the (ensemble) energy has to be sustained.”

The play’s ultimate test of sharpness, Fitzgerald said, is keeping the dialog clear when the two couples wrangling over neighbor preservation take off the gloves and let fly with bare-fisted, nakedly racist jokes. The audience by now is laughing uproariously.

“Riding through that is like surfing waves on stage,” Fitzgerald said. “You have to hold slightly before letting the next line out, and how much you hold can change drastically from night to night. The actors who I think are really great at their craft are really good at holding that tension. It’s all about staying focused on the person on stage with you amid the craziness in the audience.

“The words we say and the actions are set. But how exactly we get from point to point shifts from performance to performance. It allows for everyone to be human, not a cartoon or cardboard cutout. And not a recording.

“Clybourne Park” review: Read it at Chicago On the Aisle