It is redolent of Chicago, eloquent of a shadowed time that was, Cheryl L. West’s “Pullman Porter Blues” at the Goodman Theatre. It is a gritty, pulsing, sweet hymn to the generations of black men who made train-travel hum back in the day. 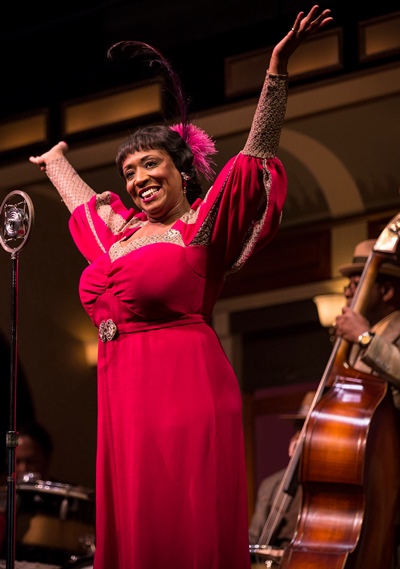 West’s song-filled play, set in 1937, is a snapshot of a night in the life of three black porters, three generations of the Sykes family, serving meticulously and proudly on a southbound run from Chicago, under the severe eye of a white conductor, their boss — though “master” is probably a better word, even at that date.

This is not just any night, however. It is June 22, when heavyweight boxing champion James Braddock would take on challenger Joe Louis, the “Brown Bomber.” Bursting with black pride, the porters will catch the fight on the radio. It will be a night of unimaginable triumph.

And nearly unbearable tension, on several fronts. The eldest Sykes, Monroe (the luminous Larry Marshall), believing his son Sylvester (Cleavant Derricks in a stormy performance) to be unable to make the run, has finagled the gig for Sylvester’s son Cephas (the gently earnest Tosin Morohunfola), a medical student at the University of Chicago. 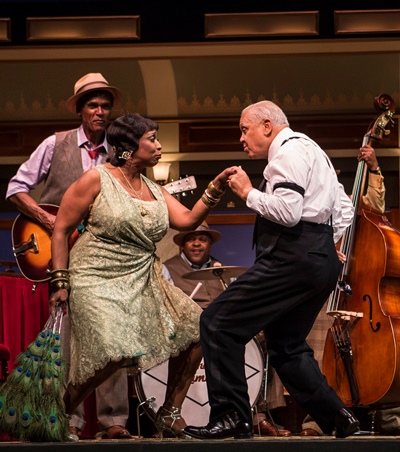 What’s more, the train’s entertainment will spotlight blues singer Sister Juba (the electric E. Faye Butler in a performance worth the price of admission), an old flame of Sylvester’s who hasn’t seen him in years and still harbors bitterness toward him.

The cast of characters — directed by Chuck Smith with inviting style and generous wit — is completed by a stowaway, a filthy, scrawny young white woman who, once she’s cleaned up, turns Cephas’ head and not just by her mean way with a harmonica. Claire Kander exudes a pixie charm as the mysterious girl who drops into this night, causes trouble, wails on her dynamite harp and – having brought events to a rolling boil – vanishes. Is she more angelic than even Cephas might declare? 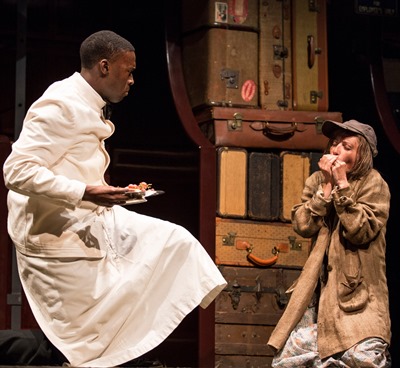 The plot-propelling stress of “Pullman Porter Blues” is double-edged: Sylvester’s furious upset with his father for having exposed his precious son to the demeaning life of Pullman service, and the ugly racism and basic hatefulness of the miserable old alcoholic, womanizing conductor Tex (played by Francis Guinan on a veering line from spleen to pathos).

It’s the blues that relieves the tension, and the infusions are frequent – 13 musical numbers sung (and shimmied!) by the porters, Butler’s magnificent Sister Juba and even the hard-boiled conductor.  To the accompaniment of a fire-balling band, we’re treated to one great blues gem after another, from “This Train” and “See See Rider” to “900 Miles” and “Hop Scop Blues.”

But a song not in the show kept coming back to mind, from the moment I laid eyes on designer Riccardo Hernandez’s grand Pullman car exterior (which opens to brightly detailed accommodations). It’s the famous lyric by another Chicago Goodman — Steve Goodman’s “City of New Orleans.” How apt these lines:

The conductor sings his song again,
The passengers will please refrain
This train’s got the disappearing railroad blues. 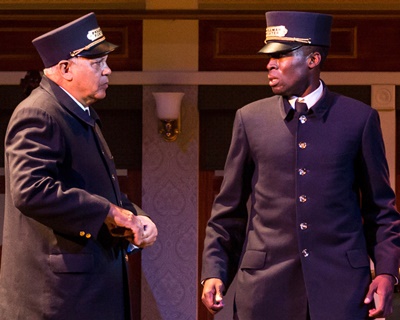 While at heart “Pullman Porter Blues” honors the hard reality of life for the black men who served on passenger trains – and the power of love to bind a family – the nostalgic aura of West’s play also reconnects us with a time before metal detectors and body wands, an epoch of American mythology that has disappeared in a receding, bluesy haze of smoke. 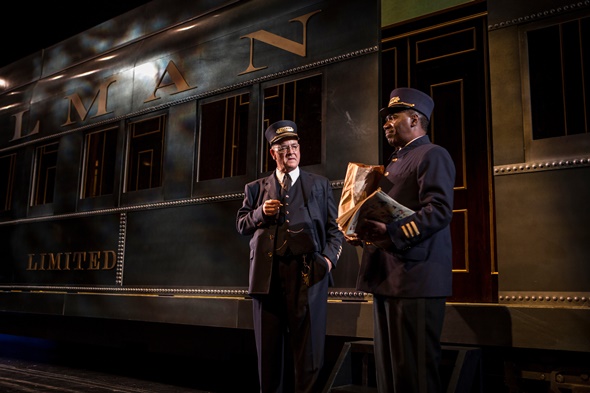