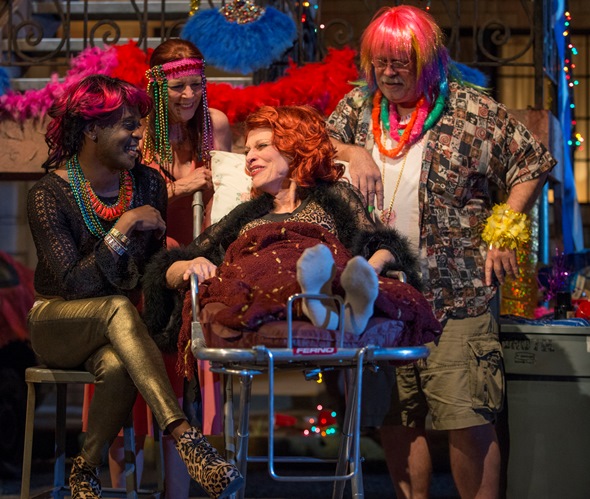 Lisa D’Amour’s latest play, “Airline Highway,” now in its world premiere run at Steppenwolf Theatre, pulls together an intriguing mélange of characters from what might euphemistically be called a subculture of contemporary New Orleans. They are a collection of losers. But memorable. 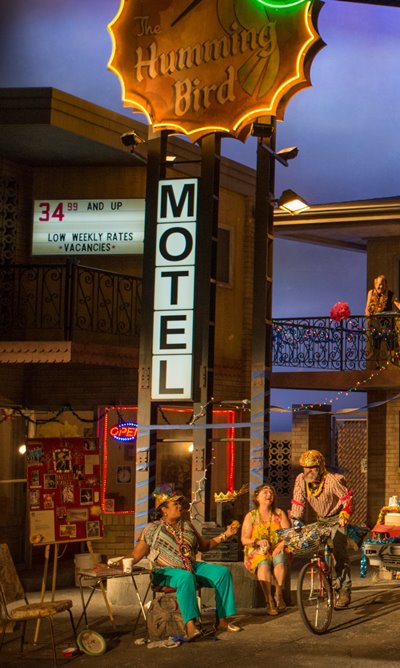 Prostitutes, misfits, petty schemers, they are a community of low-lifes, fellow travelers on the road to nowhere. The community house on Airline Highway – the route that connects New Orleans to its suburban airport — is a dilapidated motel called the Humming Bird (framed in weathered detail by designer Scott Pask). Its denizens have organized a funeral celebration for their beloved matriarch, Miss Ruby, an erstwhile madam who has asked to participate in her own wake.

“Airline Highway,” headed for Broadway’s Manhattan Theatre Club this spring , is a sort of extended existential moment, a cross-section of life’s seamy side, an empathic montage of candid snapshots. Too empathic, perhaps. I liked these well-drawn characters — all of them brought to multifaceted life by a skilled cast under the direction of Joe Mantello — better than I liked this often implausible and seemingly unfinished play.

Imagine Jean-Paul Sartre’s “No Exit” without the despair: That’s the drama at hand. Yet Sartre isn’t really D’Amour’s model here. The direct forebear of “Airline Highway” is Tennessee Williams — emphatically the hellish commune of “Camino Real” and to some degree the down-and-outers of “Vieux Carré.” But whereas, in both instances, Williams shows us society’s underbelly in all its unretouched hardness, D’Amour glosses the surface with honeyed camaraderie: All the hookers have hearts of gold, and the guys are their protectors. There’s nary an iron-fisted, cold-blooded pimp in sight. 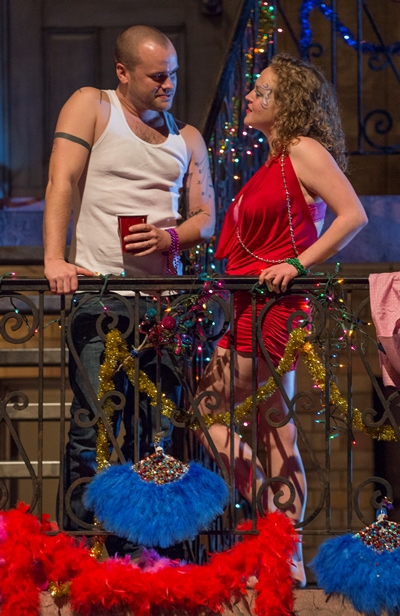 No less compromising are structural issues, starting with D’Amour’s reliance on a straw figure called Bait Boy (Stephen Louis Grush) to show how you can take the man out of the hood but you can’t take the hood out of the man, or something to that effect.

Bait Boy, who has escaped this sordid life and moved in with a somewhat older woman in Atlanta, returns for Miss Ruby’s funeral festivities with a new name (Greg) and his new consort’s 16-year-old daughter Zoe (Carolyn Braver) in tow. Zoe has tagged along to interview Bait Boy’s old pals for a class research project on social subcultures.

In the end, both Bait Boy and Zoe present unresolved dramatic problems – though only after both characters have solidly engaged our interest. When Bait Boy is confronted by an old flame, the still-youthful but utterly lost stripper Krista (Caroline Neff), sparks fly anew as the couple try to recall what they had and why it didn’t last. The dialogue is charged, tense and credible. But then, rather out of the blue, Bait Boy makes a confession that better advances the playwright’s agenda than it satisfies the tracking viewer. 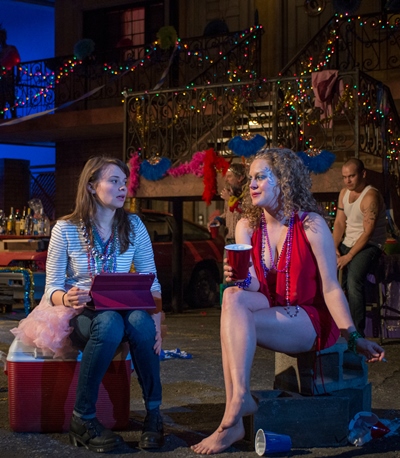 One can foresee D’Amour’s disposition of Bait Boy from a long distance off. But what’s really inadequate is the means by which his end is confirmed – through Zoe’s class report-cum-epilogue, the single weakest stroke of the play. Zoe’s little speech, back home, occurs in counterpoint with the last minutes of Miss Ruby’s life. I doubt I’m revealing too much in noting that the girl’s report sort of fades away, and so does she. Zoe has no real insight to share from her remarkable experience.

And she has indeed met some characters: Wayne (Scott Jaeck), the avuncular motel manager who doesn’t want to hear the word hooker; Sissy Na Na (K. Todd Freeman), the flamboyant cross-dresser with a deep vein of worldly wisdom; Francis (Gordon Joseph Weiss), the scruffy hanger-on and poet whose flights of symbolist verse may have meaning only to him, and Terry (Tim Edward Rhoze), the  handyman with a toolbox full of shortcuts.

Not to mention Miss Ruby herself (Judith Roberts), bed-ridden and near death, who makes a late entrance to greet her acolytes one last time and remind them again of the divine relevance of sex.

But illuminating the play at its core is Tanya, a middle-aged prostitute and drug addict who lives in dread that one of the three children she has given away in her lifetime will track down their birth mother and discover this wretched woman. Whatever the playwright’s intentions, in Kate Buddeke’s eloquent persona “Airline Highway” feels like Tanya’s story. At once tall and vaguely noble, psychologically fractured and spiritually scarred, Buddeke is radiant, sad and real. 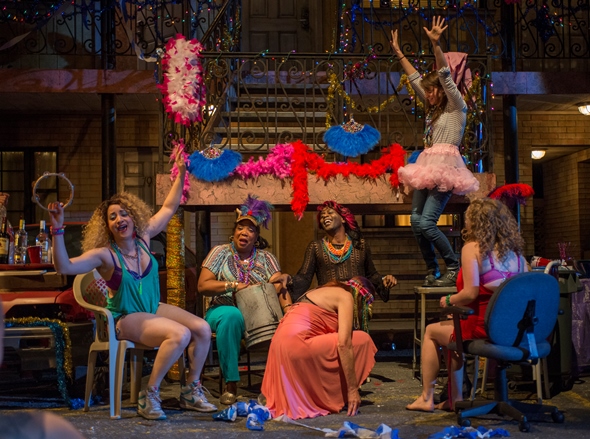