Carla’s situation might be called progress. She has graduated from detox in a hospital psych ward to an inert heap on the living room sofa. She is minded and admonished by her live-in mother-in-law while her rudderless young son behaves badly to call attention to himself. 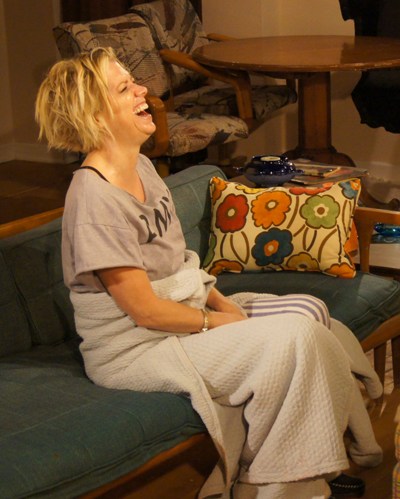 Into this bleak idyll, the setup of Bruce Norris’ play “Purple Heart” now on display at Redtwist Theatre, walks a soldier who seems to know Carla from a chance meeting. He may indeed be a former comrade of her husband, recently killed in action and the posthumous recipient of that titular award for bravery.
What follows describes a warp and weave that pushes against the borders of surrealism before all rebounds back into stark reality – to capture compassion and understanding in its clarifying light.
Norris, whose “Clybourne Park” won the 2011 Pulitzer Prize as well as the 2012 Tony Award for best new play, wrote “Purple Heart” on commission from Steppenwolf Theatre, which gave the world premiere in 2002. While some similarities of style between the two plays no doubt could be argued, what’s more striking are the fundamental differences. 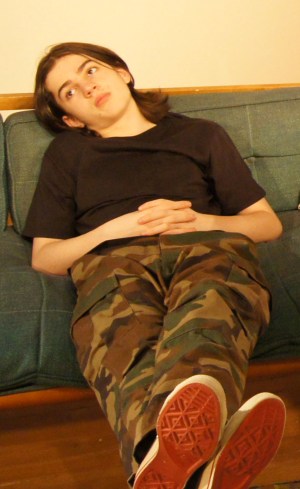 It isn’t merely that “Clybourne Park” addresses social and racial issues whereas “Purple Heart” zeroes in on a moment in one woman’s life. Norris’ approach to structure and dialogue is radically different in the two plays. In the simplistic, repetitive moralizing of the mother-in-law Grace (how Dickensian) and the noisy cant of the child Thor, as well as the clipped, laconic speech of the soldier Purdy, “Purple Heart” smacks of Samuel Beckett and plays like “Endgame” and “Waiting for Godot.” Nor are we quite sure who’s in the zoo and who’s just visiting.
As Carla, tossed up in a storm of heartbreak and booze, KC Karen Hill offers a flesh-and-soul woman we can relate to. In Carla’s opening bit, in which she can’t drag herself off the couch or even respond to her pleading son, Hill skillfully navigates through the perils of camp without running aground in sitcom. We don’t see farce, we see misery.
And misery is where Carla lives. She’s an alcoholic. Though her husband apparently was a self-centered, abusive, two-timing jerk, his death has left her feeling desperately alone. Hill conveys the full crippling weight of Carla’s depression, a state of mind underscored by Redtwist’s intimate space and designer Dennis Mae’s compact, in-the-round set.
That said, in the performance I saw, director Jimmy McDermott’s crawling pace for first stretch of dialogue, which establishes the spiritual emptiness of the household and the gulf between Carla and her mother-in-law, robbed the scene of its sustaining tension. The nattering older woman (Kathleen Ruhl) and her beleaguered daughter-in-law barked at each other in a kind of disembodied recitation. As the play moved along, however, those exchanges began to show more life, and indeed Ruhl established the needed edge of piety in Grace’s ever-ready reproofs. 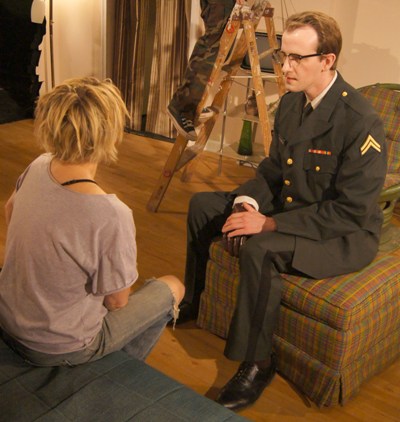 Enter the soldier, tall, trim and smartly focused in the person of Clay Sanderson. This man, Purdy, has lost his right hand to an enemy mine. But why is he here? He reminds Carla that they met in the hospital where she was being treated after her husband was killed. He even recalls details of their conversation. She seems to recall nothing.
Sanderson’s soldier is a piece of work: stiff, staring, matter-of-fact and a complete mystery. Is he Carla’s redeemer? Does he bear information, comfort? Or does his presence bode something more ominous? Perhaps there is some parallel between this marginally socialized man and Carla’s petulant, maniacal, yet oddly closed son (Nicky Roget-King).
The play suddenly plunges forward, and takes on new complexity, when Carla and the stranger sit down alone to talk. Their conversation turns to the subject of moral conscience — that little whispering angel that sits on your shoulder to remind you of the difference between right and wrong. And it will always be there. Until perhaps you decide to flick it away.

Captions and Credits: Home page and top: Carla (KC Karen Hill) is falling apart after her husband’s death and nagging mother-in-law Grace (Kathleen Ruhl) is only part of her problem. Descending: As played by KC Karen Hill, Carla’s laughs and her screams are part of the warp and weave. Thor (Nicky Roget-King) is grieving, too, and desperate for attention from his mother. Carla (KC Karen Hill) is visited by Purdy (Clay Sanderson), who may or may not know her deceased husband. Below: The dysfunctional scene, left to right, includes teenage Thor (Nicky Roget-King), the mysterious visitor Purdy (Clay Sanderson), grief-stricken Carla (KD Karen Hill) and mother-in-law Grace (Kathleen Ruhl), who constantly interferes. (Production photos by Jan Ellen Graves) 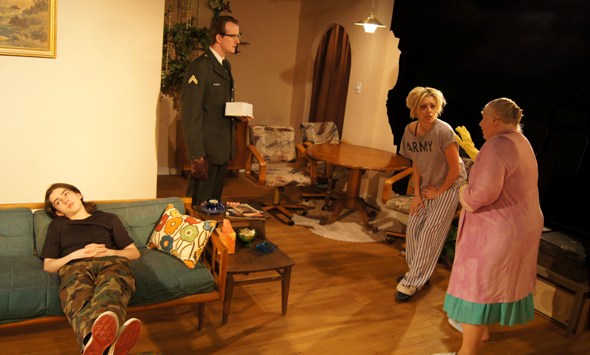