Review: “A Behanding in Spokane” by Martin McDonagh, at Profiles Theatre through Dec. 4. ***

By now I have seen Martin McDonagh’s play “A Behanding in Spokane” in three different productions, including its initial run on Broadway last season with Christopher Walken as the importuned chap who has spent the last 27 years trying to recover his left hand, lopped off by a carload of hillbillies when he was a kid back in Spokane.

My latest encounter, Profiles Theatre’s current go at it with Darrell W. Cox portraying McDonagh’s sullen, sardonic amputee, has brought some clarity to this intriguing mix of drollery and violence. “A Behanding in Spokane” is a series of schticks — darkly comic tableaux, actually – neatly connected by running gags to form a narrative arc. I wouldn’t go so far as to call it a plot. 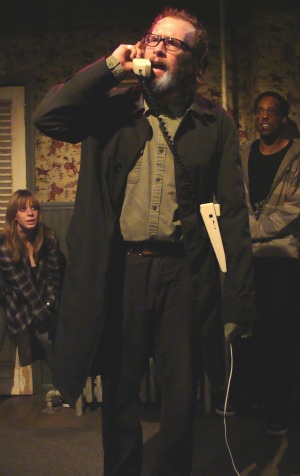 Cox is the most introspective, and perhaps the most suggestively psychotic, of the behanded I’ve seen. The character’s name by the way is Carmichael. He’s holed up in a seedy hotel with a large suitcase, a large pistol and a couple of kids who have waded into his game with the claim that they have the lopped hand. The kids are not having a good day, if only because they’ve become entangled with Carmichael, who obviously never has a good day.

The two youthful poker players – staring down Carmichael, or anyway staring down his revolver – are Toby, an African American (his race matters to the politically incorrigible Carmichael), and his blonde white girlfriend Marilyn. We can only hope these two young adults do not represent our leaders of tomorrow, or the country is doomed. In a drawer chock-full of knives, they would be the least sharp.

There is one more monkey in McDonagh’s zoo, the hotel receptionist guy, Mervyn, a delusional loser who does sit-ups in his boxer shorts when he thinks no one is watching. (You’re wondering why I don’t simply call him the receptionist or even the clerk. But no, I assure you he is the receptionist guy. He really hates that name, but that’s how Carmichael, Toby and Marilyn have him pegged.)

Cox’s soft-spoken, nearly monotonal Carmichael is one scary wacko. And the unnerving effect of his reticence is only heightened by the unrestrained blathering belligerence of our feckless anti-heros Toby and Marilyn, in the persons of Levenix Riddle and Sara Greenfield. They are some pair, bickering and blaming each other for the mess their shared opportunism has gotten them into. In his incisive, stentorian stand-up comic style, Riddle brings to mind the young Eddie Murphy. He’s a charming dufus. He may not know many words that don’t begin with f, but you have to love him. Greenfield has the play’s toughest assignment because McDonagh doesn’t really do much with Marilyn. Toby plays off her petulance, and Greenfield provides copious amounts of that.

That’s one recurring schtick, the squabbling couple. Carmichael goes through his own routines: the story of how he lost his hand, his annoying mother on the phone still giving him grief though miles away. There’s another phone bit I wouldn’t think of sharing. And Mervyn the receptionist guy has an extended set piece that meanders from monkeys to bananas and beyond and seems to come out of nowhere, though it too plants topical seeds. Mervyn is about as loosely connected to reality as Carmichael, though Eric Burgher’s rather contained performance might lead one to think the hotel minder still has one or two tight screws.

Director Rick Snyder manages to keep just enough order in this asylum to hold tension on the dramatic line. His indulgent playing out of McDonagh’s comic set pieces allows this plot-free story to acquire its own shape and rhythm. And designer Thad Hallstein has turned Profiles’ minimal acting space into an existential cell where the human comedy devolves into collisions of the absurd.

“A Behanding in Spokane” ultimately amounts to a beady-eyed spoof, a weird tale viewed through Carmichael’s foggy gaze. Cox’s knight errant is bleakly funny – slow of thought but single-minded in his purpose, lacking all human feeling but dutifully checking on mom. He gives this production both its center and its edge. He has the role down so well, he could surely do it with one hand tied behind his back. Well, not that hand. The other hand.