Lyric Opera’s ‘Butterfly’ displays a fine frame, but the musical drama is a different picture 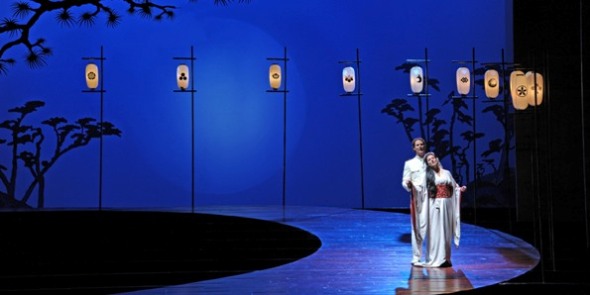 Review: “Madama Butterfly” by Giacomo Puccini, libretto by Giuseppe Giacosa and Luigi Illica, at the Lyric Opera of Chicago through Oct. 30; reprised with cast changes Jan. 11-26, 2014. ★★

To behold the grand, airy set for “Madama Butterfly” at the Lyric Opera of Chicago, with its curvaceous walkway and layered, mat-like proscenium framing – on display even as the audience assembled — was to sense one’s expectations peak toward something special, uncommon, fine.

But that augury went unfulfilled on opening night (Oct. 15), in this first Chicago presentation of a new “Butterfly” production conceived by director Michael Grandage and designed by Christopher Oram in a joint Lyric commission with the Houston Grand Opera and the Grand Théâtre de Genève. What played out was largely unremarkable, even unattractive in various aspects from conducting and singing to basic on-stage movement. 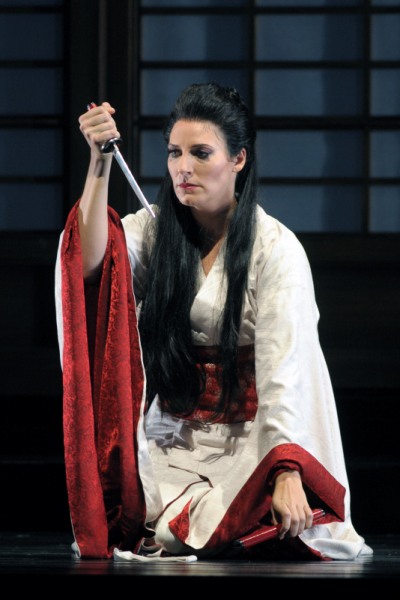 Beyond the set, little about this production felt Japanese, starting with essential movement among choristers and supernumeraries, whose too-casual motion hardly suggested the natural grace that seems endemic to that culture. Vocally, however, the chorus was far more engaging.

The better, more controlled impression this “Butterfly” made in more intimate scenes applied perhaps first of all to conductor’s Marco Armiliato’s musical management. The overbearing orchestra sound that swamped much of the first act became more contoured and precise in later scenes of Butterfly’s intense swings from anxiety to ecstasy.

Where the conductor reined in the orchestra, it played with a sense of style and expressive moment – a microcosm of this “Butterfly’s” great divide between the sublime and the all too ordinary.

The production’s best attributes came after Act I, when the vocally troubled Pinkerton (tenor James Valenti) had gone away – and with him the wooden villagers – leaving Puccini’s tragic affair to play out in the dramatically adroit and vocally able figures of Butterfly (soprano Amanda Echalaz) and Sharpless (baritone Christopher Purves).

What was missing in that first act was basically everything, starting with the whole top of Valenti’s vocal range and all his power. The tenor was neither managing the notes nor conveying credible emotional engagement with Echalaz’s Butterfly. 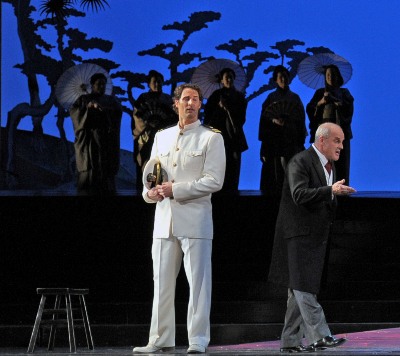 No doubt, Valenti’s vocal issues contributed to Pinkerton’s failure to create sparks with Butterfly in that first act, when we must see what she sees in him (the toying cad) and feel their mutual ardor if we are later to believe the depth of her faith in his return. Alas, the lovers’ great duet, their paean to the magic of the night, went nowhere vocally and showed but traces of the passion written into its every phrase.

The results were better when Echalaz took command of the stage, with Purves’s grandfatherly Sharpless and mezzo-soprano MaryAnn McCormick’s empathic, vocally fluent Suzuki in support.

To Butterfly’s two big arias, the poignantly hopeful “Un bel di” and her final outpouring of love to the child she must surrender, Echalaz brought a vocal splendor matched by heart-rending conviction. She elevated the opera stage to authentic theater. 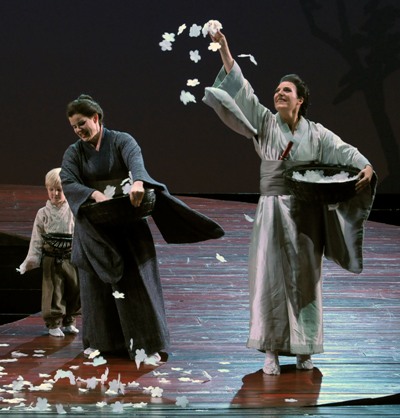 Purves likewise projected the wisdom as well as the concern of an elder statesman who probably does have grandchildren and has lived long enough to know what a broken heart looks like. That aura of maturity and assurance shaped and enriched his singing.

First to last, Oram’s elegant set served the drama well. That curving ramp provided a perfect hill to climb and descend for arriving and departing characters To set the famous vigil scene, Butterfly and the ever-faithful Suzuki scattered white flower petals along the broad walkware in a welcoming flourish for the expected return of Pinkerton. And once Suzuki, Butterfly and her child had settled in to wait, facing away from the audience at the top of the hill — to the chorus’ tender wordless accompaniment — the whole set rotated 180 degrees to bring the threesome downstage, then turned again at the vigil’s end to leave them once more looking away into the distance, forlorn and exhausted.

The rising path also became an abstract extension of Butterfly’s home, otherwise defined by a single sliding screen. There Echalaz’s abandoned Butterfly, out of options, committed hara-kiri in a simple gesture of gripping power. One of the most heart-wrenching moments in all of opera struck here in the fullness of its tragic weight.  Thus a problematic encounter with Puccini’s opera ended with stunning impact.

The current cast remains with the production through October. When the Lyric Opera reprises “Butterfly,” in January, the title role will be sung by Patricia Racette, with Stefano Secco as Pinkerton.