Report:  The course to Alexander Hanna’s appointment has been smooth, from successful initial audition to tryout weeks in March under music director Riccardo Muti and a trip to Russia and Italy with the CSO as a not-yet-official member. 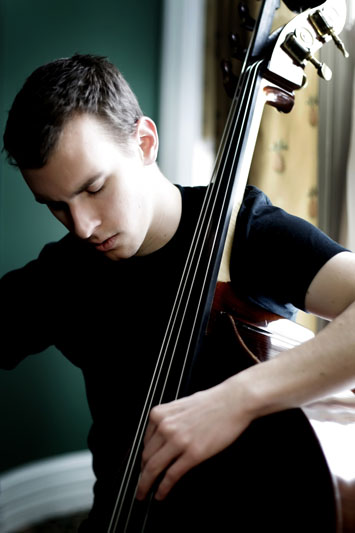 An Ohio native and Curtis grad, Hanna’s currently finishing his fourth season as principal bass with the Detroit Symphony and apparently has many talents:

According to his biographical page on the Detroit Symphony Musicians website, he came from a highly musical family and grew up playing cello and piano and singing opera, in addition to composing and playing all kinds of music including rock, jazz, blues and bluegrass.  He made his solo bass debut with the Toledo (Ohio) Symphony at the age of 14.

Hanna’s just back from the CSO’s recent tour of Russia and Italy, for which he tagged along officially as an extra bass since his appointment was not yet announced. He also played a couple of trial weeks as principal bass when music director Riccardo Muti was here in March.

While at Curtis, Hanna studied with both Philadelphia Orchestra principal bass Hal Robinson and jazz and bluegrass bassist and composer Edgar Meyer. He was a prize-winning fellow at Tanglewood and has spent recent summers with the Verbier Festival Orchestra in Switzerland. He has also performed with the Philadelphia, Cleveland and Boston symphony orchestras, so he has been seasoned with the best.