Imagine a homicidal hearts club of a very particular kind, where killers of U.S. presidents (and would-be killers) gather to clash and kibitz and relive the “why” in a time-bending collage, and you have “Assassins.” Chicago’s latest pocket production of the Stephen Sondheim and John Weidman 1990 classic comes at the close of a remarkable season for precision-cut Sondheim stagings, and this is one of them. 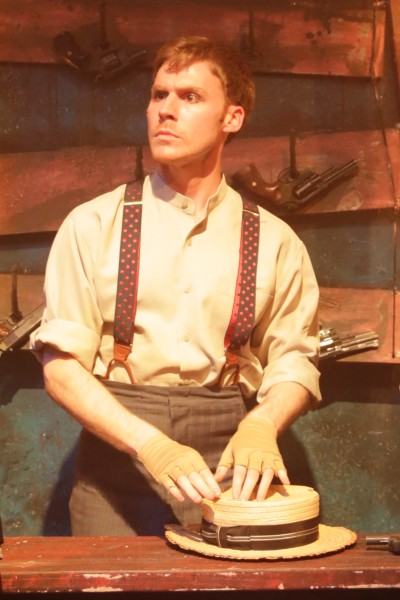 Like “Road Show,” which poked holes in the get-rich-quick American Dream (Upstairs at Chicago Shakespeare), and “Into the Woods,” which lampooned the fairy tale’s Happily Ever After (by The Hypocrites at the Mercury), this Sondheim gem by four-year-old Kokandy Productions takes aim at the Pursuit of Happiness by applying the concept to a very special subset of people.

In the weathered roller-coaster’s underbelly at a broken-down fairground, the surreal proprietor of a shooting gallery starts things off by decorating his stall with guns in the acidly funny business of his “C’mere and kill a President” seduction.

He sizes up forlorn passers-by and quickly tailors his pitch. “C’mon and shoot a President … First prize often goes to rank beginners.”  “Hey, kid, failed your test? Dream girl unimpressed?” “Bailiff on your tail? Your wife run off for good?” “Boss-a treat you crummy?” “Yo, baby! Looking for a thrill?” 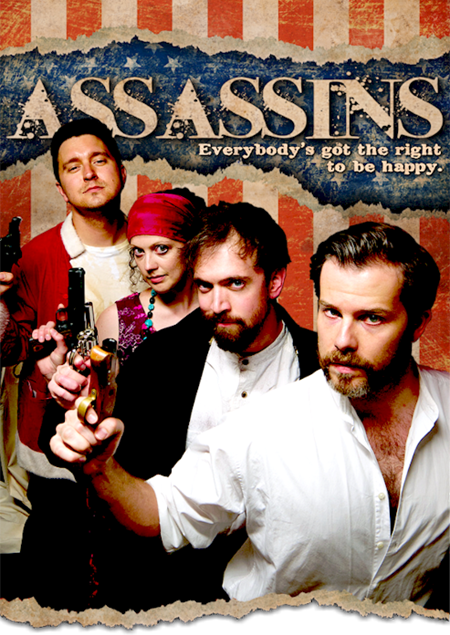 Only as the show continues do you realize the carneyman has been appealing to specific U.S. assassins and wannabes who populate this alarmingly funny hair-trigger of a show. A bountiful cast of musically talented actors brings a crazy assortment of misfits to life in a matter of minutes, and the rest plays out not as a series of chronological cameos, or as a single killer joke prolonged, but as a finely tuned theatrical whole consisting of a calibrated mix of stories and wondrously clever musical art.

When this show succeeds, as it does in the hands of this Sondheim-savvy creative team (led by stage director Rachel Edwards Harvith, music director Kory Danielson and scenic designer Zachary Gipson) and a cast of nimble singers who are acrobats of the tongue, the effect is almost Mozartian — a clear-eyed blend of human imperfection that is exquisite and complete.

The performance space they use at Theater Wit is of such shallow depth that one must yank the neck to follow the action as if on a tennis court, and one is so close to the actors that almost every one of Sondheim’s words comes through. That’s a win win in my book; you’re in the thick from the start.

Jeff Meyer‘s vaguely sinister allure as the proprietor sets the uneasy balance between real and unreal in this human sideshow. Gipson’s old wooden roller-coaster frame fairly creaks as it hovers. Actors dart from under it to don different guises, playing odd parts until their own time comes in the spotlight of horrific crimes remembered.

Cole Doman is persuasive as the Balladeer whose job it is to wryly comment by way of painting the larger picture, sucking you into the story with this quintessential Sondheim lullaby: “Every now and then the country/Goes a little wrong./Every now and then a madman’s/Bound to come along.” The Balladeer is the show’s backbone and the musical precision of Doman’s performance stands out. That said, the level of the cast’s singing under Danielson’s guidance is quite high throughout. 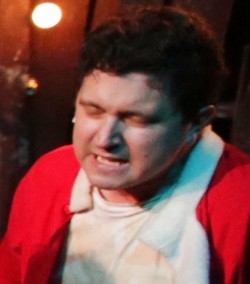 John Wilkes Booth is instantly recognizable once he careens into view, of course. He’s America’s most famous assassin, and Eric Lindahl imbues him with righteous baritonal fury over the outcome of the Civil War. Swearing that “the end doesn’t mean that it’s over,” Lindahl’s romantic conviction is suitable for the progenitor of an avenging line.

But assassin types vary, which is a very good thing for theater. Samuel Byck (hilarious Jason Richards) holds the stage in a dirty Santa Claus suit and seems to be sharing his beefs directly with Leonard Bernstein, simultaneously talking and tearing at his sandwich like an open-jawed tyrannosaur. Byck’s failed attempt on Nixon no longer registers as even a footnote with most of us, but Richards’ ability to talk with food in his mouth should earn him fame in Chicago for quite a while. 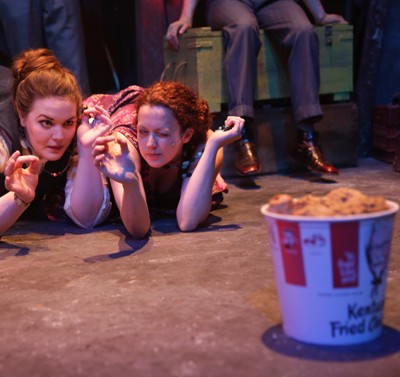 Meanwhile, Allison Hendrix (as “Squeaky” Fromme) and Neala Barron (as Sara Jane Moore) are a riot as they get high on a joint together and let off steam by shooting at the Colonel’s face on a bucket of Kentucky Fried Chicken, speaking of convenient father figures. A waste of bullets, you say? It’s nothing compared to the role that bullets come to play in their hapless attack on Gerald Ford. (Sorry, can’t ruin this for you, you have to be there.)

Patrick Byrnes plays Leon Czolgosz, the sidelined factory worker enflamed with anarchist zeal who fired point blank at McKinley in a presidential receiving line and got the electric chair for it. Byrnes joins a four-voice “Gun Song” with Lindhal’s Booth, Barron’s Moore and Greg Foster as Garfield assassin Charles Guiteau. It connects seriously with the audience, almost an emotional ambush disguised as a barber-shop quartet. 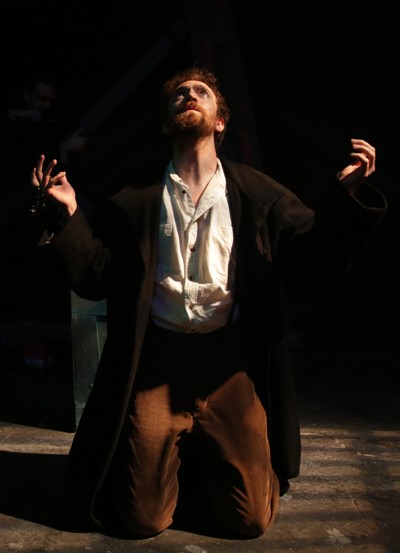 As Czolgosz muses on how it takes a lot of men to make a gun — increasingly worked up at the thought of the men in the mines and mills and factories who die for some “thing” that makes the bosses richer — meek Guiteau becomes hypnotized by the notion that “all you have to do is squeeze your little finger.” There is no era since the show’s 1990 debut, especially ours,  in which that number hasn’t made one feel vulnerable to the random threat of the barrel’s target.

Sondheim and Weidman are expert at startling setups. Guiteau’s ridiculously delusional “I am going to the Lordy” begins with an a cappella prayer and builds to absurdist tension at the hangman’s trapdoor. There’s another telling shift at the very end of a scene for Michael Potsic as John Hinckley, who attempted to assassinate Reagan by way of impressing Jodie Foster. His back story is told as a submissive sick-with-love song that “Squeaky” Fromme sings simultaneously to Charlie Manson. 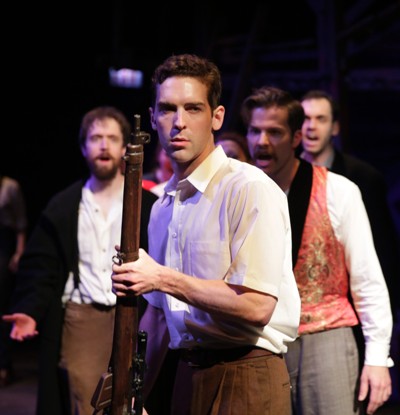 In the Dallas sequence, likewise, would-be FDR assassin Giuseppe Zangara (Alex Heika) joins his historical counterparts to whisper in the ear of Lee Harvey Oswald (Nathan Gardner), demanding that he make his “family” proud. With the ensuing gunshot, the show opens out into an extraordinary company number that gives full voice to a nation’s grief.

Although this is a scrappy squad performing in a tiny space with an orchestra of exactly seven, the cumulative poetic effect of this unfolding is far from small. That’s thanks in large part to Kokandy’s solid musical values, which do not stand second to its theatrical values, and without which no Sondheim show can be honestly served.