‘Happy’ at Redtwist: Things are going so well, there must be plenty of reasons to be morose

Review: “Happy” by Robert Caisley, at Redtwist Theatre through March 16. ★★★

Happiness. Is it an authentic state of contentment, fulfillment, grace – or merely delusion, self-deception and denial? Playwright  Robert Caisely pummels the question in “Happy,” an ironically titled session of group misery directed by Elly Green with stunning acerbity at Redtwist Theatre. 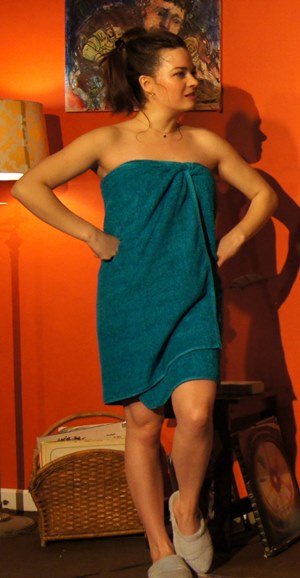 There’s more than a touch of Edward Albee’s “Who’s Afraid of Virginia Woolf” in Caisely’s wry, caustic play about a cozy dinner party that middle-aged artist Eduardo and his 22-year-old girlfriend Eva host for his longtime friend Alfred and wife Melinda – a pair thriving in a good marriage despite the stress of raising a teenage daughter with MS.

That Eduardo may have forgotten to tell Eva they had guests coming for dinner is but the first wrinkle. She, home alone and just out of the shower, answers the door in a towel – to greet Alfred, also alone, drenched with water from an incident just outside where a car zoomed through a puddle and doused him. This is the stuff sitcoms are made of. Not here.

Tossing aside all conventional decorum and forbearance – though preserving her towel – Eva (the remarkably, doggedly sardonic Amanda Powell) immediately begins to grind on Alfred (Michael Sherwin) with a line of impertinent questions and observations that leave him struggling to maintain his own sense of courtesy.

Impassive, unsmiling and just plain rude, Eva soon challenges the generous-spirited Alfred – whom, to his expressed annoyance, she insists on calling Alfie – on the point of his happiness. It is fake, she says, implying that this man she has never before laid eyes on doth protest too much his harmony with the world, his readiness to see the silver lining in every bad situation.

Though Sherwin’s astonished, then incredulous Alfred tries to roll with Eva’s unfathomable abuse, it only builds. She invokes her absent husband, Alfred’s old pal, claiming that he, too, wonders how Alfred can really be so sanguine “in spite of everything.”

Thus the stage is set for the arrival of Eva’s boyfriend Eduardo (Michael Kingston) and Alfred’s wife Melinda (Melonie Collmann). She and Alfred share, with light and devoted hearts, the burden of caring for their afflicted daughter. Now, as the evening moves forward and Powell’s Eva continues to beat up Alfred, this almost catatonically expressionless inquisitor begins to reveal the kinds of issues any therapist would look for.

Her venomous “honesty” spews from a bruised heart. She has lost loved ones, including a brother who killed himself. She’s only been with Eduardo for a month, and in a bad relationship before that. The signs of clinical depression are manifest: She drinks excessively and stays in bed for days at a time. She eats nothing, then binges.

And this is the miserable little twit picking at Alfred’s good nature. But the play is not over yet. Eva may be numb, but she is not dumb. She is in fact an artist whose work is everywhere on display around the apartment. This damaged soul, this social cow in the china shop, is creative, imaginative. And like every true artist, perceptive.

Though there’s no carousel to rotate designer Ross G. Hoppe’s artfully meager apartment, the scene takes a decided turn. As Eva wails away at him, at his honesty, at his authenticity, Alfred finds himself refilling his wine glass with copious relief. Then comes a blow he couldn’t have imagined, and this particular game of get the guest is over. Or rather, Alfred takes over.

Sherwin brings to Alfred’s ensuing, wine-lubricated eruption the galvanic conviction of a man tapping into the core of his being. No pretense here, no fakery. Sherwin’s good, faithful, liberated Alfie takes honesty to a new place. It is a deconstruction. Like the audible audience, the two people who should know him best, his wife and his friend, are aghast.

But not Eva. Not the sentient artist, whose work is now finished.