‘Martyr’ at Steep: Shrinking from sex, fearful youth finds a hideout, if not shelter, in Bible 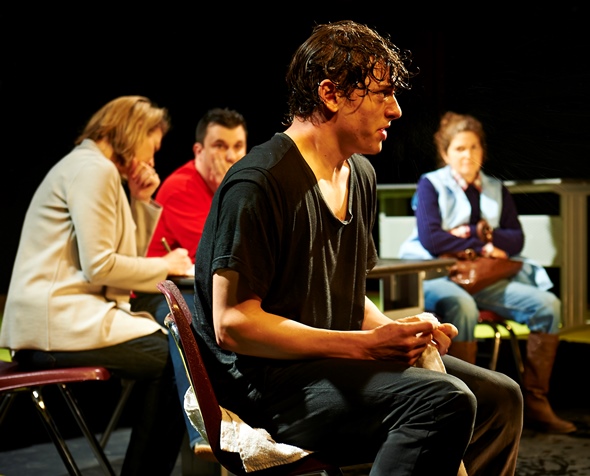 Review: “Martyr” by Marius von Mayenburg, translated from the German by Maja Zade, at Steep Theatre through May 23. ★★★★

When we first encounter Benjamin Südel, he is a moody teen in the middle of his violent spring awakening. Awkward and obsessed with himself, he is almost paralyzed with bewilderment – no, terror – as he is thrust into his school’s hormonal stew. The mere proximity of Lydia Weber, a dangerously confident tease, amounts to a bombardment of sensations, the threat of her touch a constant worry.

Resourceful, though, is this kid, who may or may not be the title character of Marius von Mayenburg’s play, “Martyr,” now enjoying nervous laughter in its fine U.S. premiere, in translation by Maja Zade, at Steep Theatre. The beautifully crafted ensemble performance is directed by Joanie Schultz. 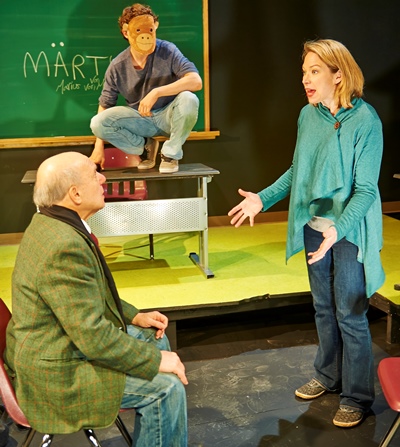 Brando Crawford is riveting in the starring role of the shy boy left to his own devices by a sharp-tongued and mostly absent single mom. Myopic officials of school and church — a toxic assortment who serve him at dangerously cross purposes — worsen Benjamin’s trauma and desperation, but not before he is able to feel the dizzying success of tilting at a few windmills.

Thus there’s delightful serendipity in the cross-town Chicago conversation currently to be had between “Martyr” at the Steep and “The Good Book,” which finishes April 19 at the Court Theatre in Hyde Park. Both feature a young man in generational conflict who derives personal courage from the shelter of the Bible’s words — though different words, and different directions, shape that story’s arc. Both plays are also smartly contrapuntal, simultaneously tracing the story of middle-aged pedagogues, women at the top of their game whose lives are disrupted by direct threats to their non-religious beliefs. 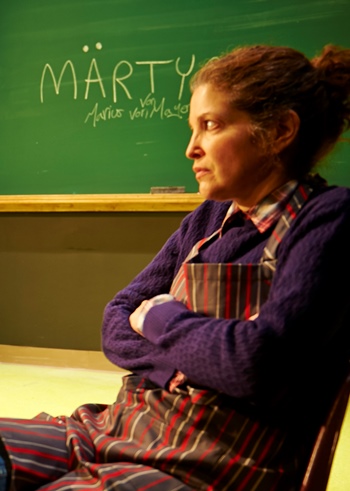 But where Court’s production is focused on the Bible’s own history, Steep’s meditates on its role as an inspirer of teenage radicalism. Its agenda is softened by von Mayenburg’s decision to look at the mechanism through a Christian rather than an Islamic prism, as if to stress that he’s not interested in writing “Martyr” as anti-Arab polemic. But the play’s intent is clearly to explore how complex religions that are grounded in generosity and brotherly love can be puffed up via simplification into a morally superior justification for cruelty and aggression.

Benjamin rages with curiosity. He has discovered an intimate companion and mentor in the Christian Old Testament and New Testament. In a self-taught personal odyssey, he has riddled his well-worn junkets through the Bible with Post-Its and bookmarks that underscore the truths he so desperately seeks — the ones that ring self-evidently true to him, especially those that warn of the evil of lust, the holiness of abstention and the general assurance that God has a personal plan for him.

Benjamin’s neurosis deepens to the point at which he can hardly speak except to quote the Bible, styling himself as the classroom equivalent of the Jesus who drove the money-changers from the temple and the Jesus who cured a cripple’s infirmity by the laying on of hands. The adoring cripple Georg Hansen is played by Travis Coe with high passion and delicacy that made rich use of Georg’s silences as well as his lines. 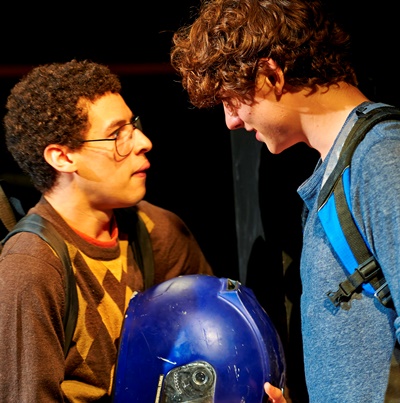 And thus a universal right of passage into adulthood becomes yet another of those randomly specific opportunities for a recruiter who is paying attention. This seems to be the playwright’s message, although the agenda of the kindly and benign pastor Dieter Menrath (Brandon St. Clair Saunders), who hovers throughout, remains largely unspoken. It’s an aspect of the play’s structure that merits further attention by von Mayenburg in his decision to switch around fundamentalist identities, and one which the production left undeveloped in a show that was otherwise abundant in detail and subtextual nuance.

Chelsea M. Warren’s chalk-rich schoolroom design becomes a powerfully ironic playpen for three educators in power, led by headmaster Willy Batzler (Walter Brody in a genial caricature of the ossified school principal). Batzler is a bureaucrat with a politician’s nose who never met a cliché he didn’t like, an issue that couldn’t be subjected to compromise, or an underling he wouldn’t sell out in a heartbeat. Mayenburg’s agenda may be overly drawn here, although Chicagoans may infer a contemporary resemblance to the odd local politician. 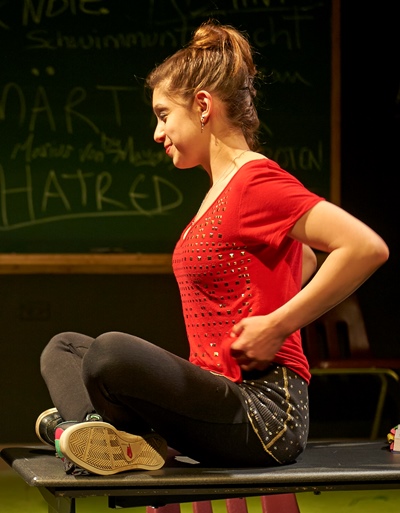 The two teachers who trigger Benjamin’s meltdown are Markus Dörflinger, the school’s no-nonsense history teacher and swimming coach, and his live-in partner Erika Roth, who teaches science, including evolution and the biology of sex, both of which provoke Benjamin’s traumatic breaks. While Roth (Kendra Thulin) is forced to play defense almost from the start, Steve Schine plays Dörflinger as the guy on offense who’s onto Benjamin’s bluff early on. He knows the real reason Benjamin doesn’t want to get nearly naked in the pool, even if Benjamin doesn’t, as a well-played scene between teacher and student makes apparent.

As the science teacher Thulin carries the greater weight of the play. In a sympathetic and well-calibrated portrayal, Thulin’s Erika Roth sees her position — as a teacher of science, which should be about science — as unassailable. But that idea is subjected to siege from various sides in what becomes a very dark comedy. She descends from tentatively earnest attempts to help Benjamin understand the curriculum, to exasperation, obsession, and ultimately to acts of extreme desperation at the edge of rationality, in her panic to preserve her sense of self. Which is where her arc, and Benjamin’s, cross from different directions.

Cindy Marker is superb as the beleaguered mom, Inge Südel, a stand-in for the world of exhausted parents who are scarred themselves and who unwittingly pass the damage on. When Inge finally thinks she sees a way to help her son, it’s for the wrong reason, and the consequence is disastrous. And Claire Saxe is luminous as Lydia Weber, a child in a woman’s body, who makes Benjamin’s plight real and who senses, without really understanding, the power of her touch and the trouble she’s capable of causing.