Interview: In The Hypocrites’ production of “Into the Woods,” her first Sondheim show, actress mastered the ropes — and loves the rap. Through April 5 at Mercury Theatre.

Back in 1986, when the musical “Into the Woods” was new, composer-lyricist Stephen Sondheim probably thought of the witch’s show-stopping number about her vegetable garden as a direct descendant of the patter songs long associated with Gilbert and Sullivan.

But this is 2014, and to the youthful Hillary Marren, who plays the old crone in The Hypocrites’ imaginative take on “Into the Woods,” the veggie song is exactly what it sounds like in her disarming, rapid-fire delivery — a very smart rap. 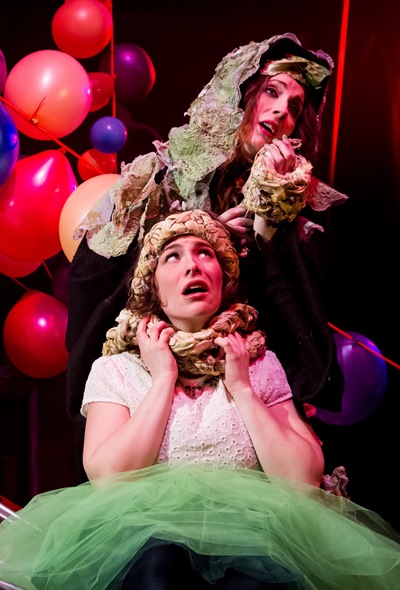 “I was playing around with different characterizations of the witch herself, and I thought of the rapper Nicki Minaj,” says Marren. “She is so aggressive, like this force of nature. And Sondheim’s rap has so much humor in it. Looking at it that way helped me to find the humor in her generally.

“I love rap music. I listen to it a lot. I grew up rapping. I love word play and fast rap. I have a passion for it. And getting to play the witch, every night I’m so excited, so ramped up waiting for this song because I get to rap it out. It’s so much fun.”

Sondheim’s hilarious rap comes up when the witch, who lives next door to a childless baker and his wife, pays them a visit. She reminds the couple of an old offense against her perpetrated by the baker’s father: To satisfy his pregnant wife’s craving for greens, he crept into the witch’s garden one night and made off with armloads of rutabaga, arugula and rampion. Not to mention some very unusual beans.

Her rapped account goes on to explain that, rather than turning the thief to stone on the spot, she struck a deal with the couple: They could have the greens – in exchange for the child not yet born. When the witch got the child, she named her Rapunzel and sequestered her in a high tower. Thus the fairy tale of Rapunzel is interwoven with several other famous fables that form the musical’s first half. (The second part, pure Sondheim, follows the assorted miseries that play out where convention calls for happy-ever-afters.) 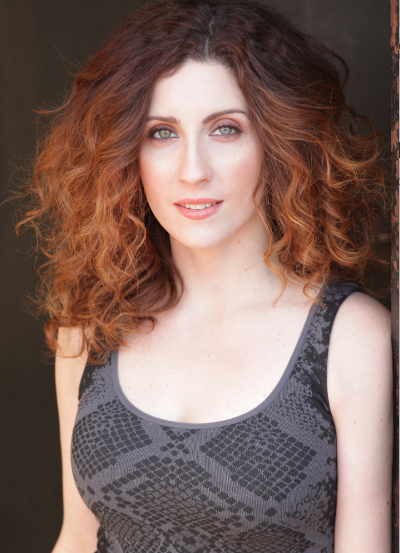 While Marren’s rhapsodic rap all but steals this wry and twisting tale, she insists it’s such an exacting team effort that no part of it can succeed without precise interaction throughout the cast. And what’s more, she adds, getting those gears to mesh took long, hard work.

“I’d never done a show like this before,” she says. “It was quite a process. We wanted to create a heightened, playful atmosphere – but with an emotional rawness going on at the same time. Using cool things like the slide and the balloons, we made a rec room of sorts, the kind of space where a bunch of people might decide to tell a story.”

Marren is describing a funky set that utilizes, among other found objects, a child’s slide as Rapunzel’s tower, bits of clothing and the odd accessory to suggest characters and, pièce de résistance, a “woods” made from dozens of brightly colored strung balloons – which the large cast, switching off among an even larger number of characters, is constantly repositioning as the swiftly moving story dictates.

Getting the balloon drill down, says Marren, was a serious challenge. 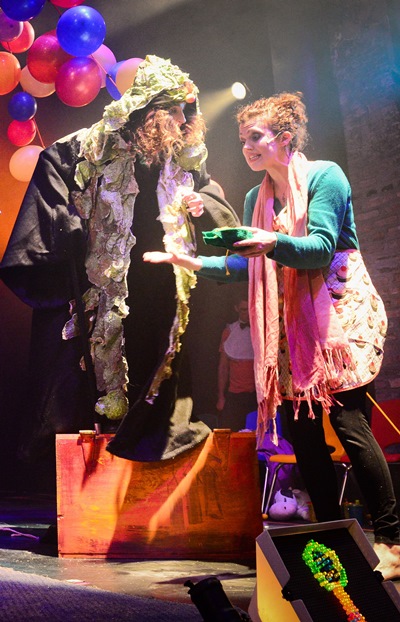 “We called it rope-ography. We spent entire rehearsals devoted to rope-ography, learning how to create this world until it became second nature. But that process also helped to place us in this magical world. The problem was that we’d memorized all these complicated moves in the rehearsal room using string. When we moved onstage, we had to relearn everything because now for the first time we were dealing with the actual ropes and balloons. And of course, much of what seemed to work in the rehearsal room didn’t work in the story-telling onstage.”

The rope-ography, Marren explained, involved intricate handoffs of rope-strung balloons between actors — who at the same time might be morphing from one character to another, by putting on a different cape or paper hat or fluffy scarf.

“It was huge for everybody,” says Marren. “Honestly, it was terrifying. Now it’s old hat. Now it’s great fun, even if somebody still steps on your foot once in a while. But the whimsy of it all is wonderful. The physical challenge is still great, though. I leave the character of the witch to step into another role, maybe just for a moment, then right back to the witch where I have to reset the moment. You find yourself out of breath.”

And needing to sing Sondheim’s difficult music. “I hadn’t sung Sondheim before,” says Marren. “The first day of rehearsal I was overwhelmed. His melodies are so complex. I have a good memory for lines and music, and the music lies well for me, but this is the hardest show I’ve ever done.” 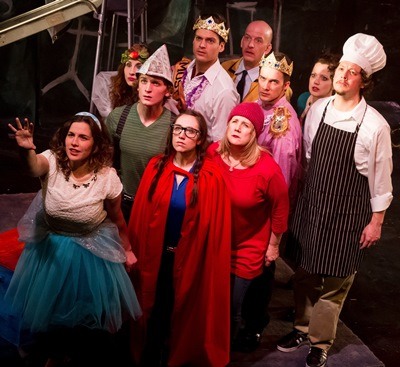 “You couldn’t be thinking about the notes and the movement at the same time, it’s too complicated,” she says. “We had to be able to trust each other to be at the right place. With Sondheim, when something’s off, if can throw everything off.”

Eventually, she said, the well-drilled troupe could enjoy “the kid-like atmosphere. It began to feel like honest story-telling, so authentic and so playful. The play is about real situations even though it’s magical. Sondheim’s sense of reality helped us find our own freedom – more like a reckless abandon!”