SPRING GREEN, Wis. — As if to signal rebirth at the outset of its 35th season, American Players Theatre, under new artistic director Brenda DeVita, has widened its scope beyond classic European fare to include the masterpieces of American theater. It could scarcely have dived more boldly into that pool, or more artfully, than with its sharp-edged and idiomatic production of David Mamet’s “American Buffalo.” 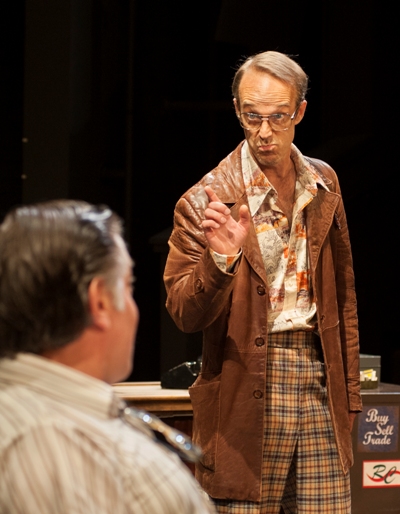 Through the clipped, terse — even semi-formed — dialogue instantly recognizable as Mamet, the two principal characters of “American Buffalo” (1975) reframe the aburdist theater of Samuel Beckett’s  “Waiting for Godot” from two decades before. Like Vladimir and Estragon, Mamet’s hapless, dithering pair, second-hand shop owner Donny and his pal Teach wait and ponder and stew: They’re going to pull a heist, a simple burglary to steal some coins from a known collector. All that stands in their way is reality; that, and  their own insurmountable ineptitude.

But Donny and Teach are dauntless. They consider every angle. Besides, their objective is just around the corner. They also have solid information from their teenage associate Bobby that said collector has vacated the premises. It’s a slam-dunk. That’s what proper planning gets you. It gets you a slam-dunk. Now they’re just waiting for a third guy to show up. The guy is a guy Donny brings in, over Teach’s objection, for added security. So now they’re waiting; waiting and stewing. Teach doesn’t need a special reason to be anxious. His adrenaline is in the red zone at all times, and to watch James Ridge dart and fidget about Donny’s shop as the hyperactive Teach is exhausting by sheer proximity. At the festival’s intimate Touchstone Theatre, that sense of immediacy is like being right in the middle of the amazing clutter of used stuff piled into set designer Liz Freese’s resale shop.

Ridge’s performance is a mad tour de force, a blizzard of half-conceived thoughts punctuated by bodily contortions and ceaseless agitation that has no pause even when Teach, like an annoying but elusive fly, lands somewhere for a moment. He pounces, crouches, springs — all the while sprewing his impulsive insights, calculations, suspicions. These two friends, feckless characters who have muddled their way into middle age, believe themselves to be clever, astute judges of human nature, original thinkers and, not least, rationalists. They know what they know, and what they know is based on fact — the hard variety of fact Teach substantiates by an upturned index finger: Fact, fact, fact.

But it’s also true that Teach’s certain knowledge of the world is as pliable, as Gumby-like, as Ridge’s ever-flexing body.

When Donny quietly points out a hole in his logic or a problem with a vital fact, this malleable Teach recalibrates and, with undiminished confidence, lurches off in another direction.

Ridge makes these mid-flight adjustments without missing a beat, and it’s very funny. But a palpable malevolence also hangs over his supercharged presence. And when the implicit threat becomes actuality, we are stunned but not suprised. And no one is laughing.

Opposite this raving figure is Brian Mani’s stolid Donny, the immovable boulder to Teach’s sandstorm. Laconic and implacable, Donny thinks before he speaks and he says little. He and Teach go way back, which means they can be at each other’s throats one minute and allies with a common purpose the next. Mani is the anchor Donny must be to balance Teach’s raging paranoia. He’s also the comforting father figure to young Bobby, played with touching simplicity by Brendan Meyer.

If neither Teach nor Donny would put up a big number on the IQ chart, Bobby is slower still. He watches his older exemplars, picks up a few bits of illicit wiliness and parlays these insights into a big mistake.

From three fine-tuned actors, director Kenneth Albers has woven richly textured theater of the absurd. You come away understanding that success or failure is not what Teach and Donny are about. The gambit is the thing. If not today, then tomorrow.