Review: “To Master the Art” by William Brown and Doug Frew, produced by Chicago Commercial Collective and presented by Broadway in Chicago, at the Broadway Playhouse through Oct. 20. ★★★★

It is like properly prepared scrambled eggs, this rebuilt production of “To Master the Art,” the story of how a tall, kitchen-clueless Californian became the famous Julia Child: basic, sumptuous, irresistible. 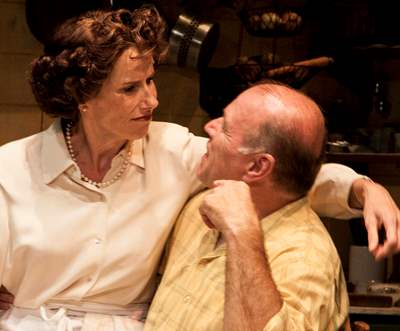 If this lovely play, written by William Brown and Doug Frew, possessed an intimate charm in its original 2010 staging at TimeLine Theatre that cannot be replicated in the Broadway Playhouse’s grander proscenium venue, its essential warmth and honesty remain undiminished – thanks largely to Karen Janes Woditsch’s still-impeccable turn as Julia Child and Craig Spidle’s again empathic portrait of her indulgent and adoring husband.

As he did for the world premiere at TimeLine, co-author Brown directs this revival with illuminating sensibility for this lanky woman with time on her hands in 1948 Paris, the mixed reception she encounters as she puts her toe in the water of French cuisine and the lusty affection between Julia and Paul, who’s on U.S. government assignment in Paris to promote American policy in the aftermath of World War II.

Yet it is Woditsch’s full-hearted performance that imbues “To Master the Art” with its life pulse and ardor. Her earnest, eager, dauntless Julia makes a credible progression from Yankee naïf through the mysteries of training at the Cordon Bleu to co-author triumphant of “Mastering the Art of French Cooking.” 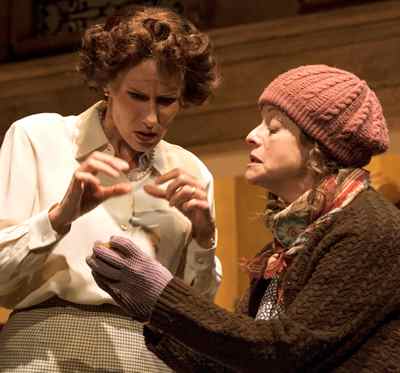 Which brings us to the singular touch of theatrical chemistry between Woditsch and Jeannie Affelder as Julia’s French pal Simca, co-author of the tome that would bring authentic cuisine française into American kitchens. Affelder’s vivacious Simca is a spunky delight, with an intelligence and esprit worthy of Julia’s. It’s a real collaboration. They feed off each other, push each other, revel and wrangle together.

The sparkling yet believably spontaneous dialogue they share applies as well to the emotionally wide-ranging scenes between Julia and Paul – mostly in designer Keith Pitts’s unpretentiously appointed kitchen. While Paul is solidly in her corner as Julia’s culinary gift begins to blossom, he’s also under increasing strain from the scrutiny of Washington as the post-war Communist witch hunts begin to rev up. Talk in the Childs’s kitchen veers from boeuf bourguignon to political suspicion, and Craig Spidle plays those tormented turns in a delicate balance between exuberance and fear. 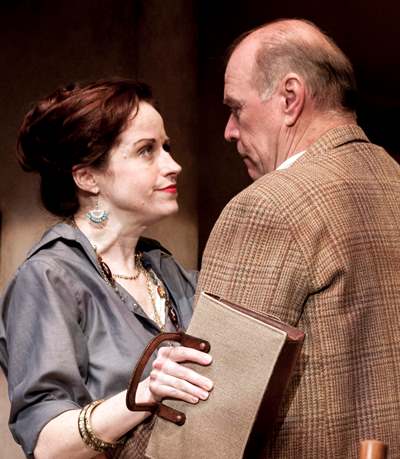 Indeed, one of the play’s most effective scenes takes place far from the idyllic world of French cooking, in a cold Washington interrogation room where Paul undergoes questioning by two investigators who are heard but not seen. It’s quite Kafka-esque and unnerving. These guys have the book on Paul. They know every detail of his life going way back, and they want to know what those details mean. It’s ugly and outrageous, and Spidle plays it through a steady transformation from befuddlement to indignation to rage.

The Commie witch-hunt doesn’t end there. An old friend of Paul and Julia, from their prior service in U.S. intelligence, is a once-avowed Communist now being hounded by investigators. Heidi Kettenring’s portrait of this smart, brassy radical is a study in disintegration, a plucky character ground down by relentless forces, unchecked and overwhelming. 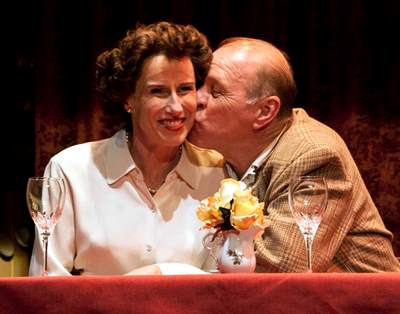 It is this pitch and yaw of life that lends Julia Child’s personal success its double edge of irony and magnificence. Art – in this case, the creativity of fine cooking – transcends all the ugliness the world can muster. And that transcendence begins with an unforgettable lesson in the proper way to make scrambled eggs.

How hard can this be? Seriously, who can’t scramble an egg? That’s the question on the faces of Julia and a handful of ex-G.I.’s who form this little cooking class of Americans. When the French chef (played with shell-crushing dexterity by Terry Hamilton) invites one of the group to give it a try, the boys hang back but Julia – who knows at least this much about cooking – volunteers, and whips up a scramble. Hamilton’s wonderfully droll chef ponders the result, observes that everything she did was wrong, dumps the skillet and proceeds to demonstrate the right way to make scrambled eggs to cry for.

In the electric jolt of that scrumptious instant, the American mistress of the art of French cooking is born.