Raven Theatre sifts through debris and debate of ‘The Price,’ but can’t deliver the payoff

Review: “The Price” by Arthur Miller, at Raven Theatre through April 14. ***

What’s it all worth, this stuff accumulated through a lifetime and piled in the attic of memory: the grudges and resentment, the sacrifices and self-doubt, the opportunities missed? 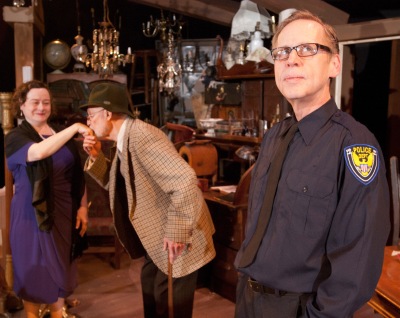 Such is the detritus we’re really looking at in the myriad forms of dressers and lamps, tables and chairs, an old phonograph and a harp all heaped together as the backdrop for Raven Theatre’s eloquent and painful, if ultimately flawed, tour through Arthur Miller’s play “The Price.” (Antique buffs are going to love this hodgepodge assembled by designer Amanda Rozmiarek and set dresser Mary O’Dowd.)

Victor, a veteran beat cop, and Walter, his older brother and a high-priced surgeon, are meeting with an estate buyer to sell off the furnishings of their late father’s life. Esther, Victor’s not-so-happy wife of many years, has come along to tell him what to do. But Walter doesn’t show, which goes a long way toward filling in the blank of an estrangement between the brothers that has dragged on for 16 years.

Gregory Solomon, the buyer, does keep the appointment and — in the absence of busy physician Walter and carping wife Esther who has stepped out – Victor accepts Solomon’s price of $1,100 for the whole megillah. That’s when the star physician finally makes his entrance, the wife returns and suddenly everybody’s on Victor’s case for taking so little money for all this fine junk. 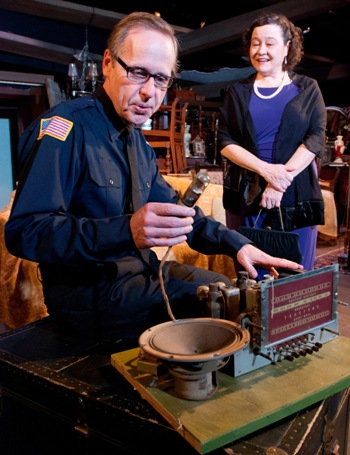 But “The Price” is not about the eleven hundred bucks. It’s about the cost of living, the price one pays for choices made, for compromising and settling – or for the headlong pursuit of wealth and just walking out on the family. Both Walter and Victor have paid dearly for the lives they’ve led. One made his purchase with open eyes and a full heart; the other sank everything, aspiration and soul and integrity, into an illusion. Which man played the fool is the inquiry that occupies Miller’s brilliant second act, and it is played here with the harrowing intensity of a courtroom drama. Convincing testimony crumbles on cross-examination, only to have new evidence swing the case the other way again. In the balance hangs the legitimacy of a man’s life.

At its core, “The Price” is Victor’s story and as the street-smart cop with a troubled soul, Chuck Spencer commands the stage with a direct, raw honesty. He surveys the dusty mountain of furniture and other family mementoes – including his old fencing foil, gloves and mask – with a mixture of poignancy, pleasure and mystification. He has no idea what it’s all worth; who would?

Spencer reveals a good deal about Victor as the impatient cop demands a price from ancient buyer Solomon, a philosophical and unflappable man of 89 brought fetchingly to life by Leonard Kraft: The policeman is uncomfortable revisiting this place he hasn’t seen in many years, these rooms where he cared for his ailing father, an erstwhile millionaire left indigent and frightened after the crash of ’29. And yet even in his distraction, the cop in Victor is ever the analytical listener. He’s expert at connecting dots, discerning intentions — or, as he puts it at one point, making sure he doesn’t end up with a knife in the back.

That proves to be a useful skill when Walter  — self-possessed, condescending and manipulative in the person of Jon Steinhagen — walks through the door. Now begins Miller’s courtroom drama as the alienated brothers quickly shatter the veneer of reconciliation with charges and countercharges of who messed up whose life. Steinhagen is a worthily smarmy narcissist and a persuasive debater. His character could just as well be a lawyer as a surgeon. But it’s in his steady, reluctant revelation of Walter’s fractured life that Steinhagen makes his finest contribution.

Director Michael Menendian’s balanced conception is so adroitly executed that its critical collapse comes as a shock. The root of the problem lies in JoAnn Montemurro’s vague portrait of Victor’s unhappy spouse Esther, who is in effect the judge in the brothers’ increasingly heated debate. Esther begins with the conviction that Victor has thrown his life away, has no backbone and lacks the gumption to seize a golden opportunity when it’s handed to him.

In the end, though a new truth has emerged, Montemurro’s Esther seems be somewhere behind the curve of events. To observe that she remains ambivalent is to conclude that Miller’s virtuosic venture has come to nothing. The awkward ending falls like a double yoke on actor and director alike.