Interview: Challenging incestuous slant, actor sees Eddie Carbone as a protective uncle in Teatro Vista’s ‘A View From the Bridge,’ at Victory Gardens through May 18.

Some people will tell you Eddie Carbone, the Brooklyn longshoreman whose life disintegrates in Arthur Miller’s play “A View From the Bridge,” is the tragic victim of his attraction to the beautiful young niece who has grown up as his ward. But not actor Ramón Camín, who says he forged his gripping portrayal for Teatro Vista simply by taking Eddie as a man of his word. 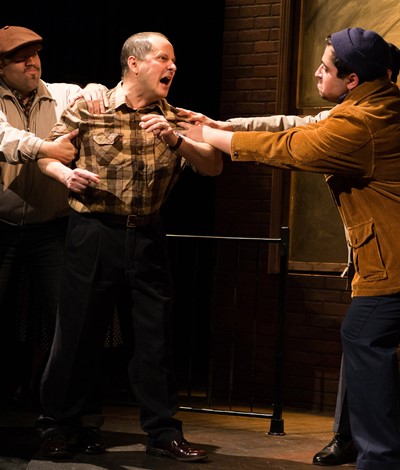 Eddie Carbone, a middle-aged Italian-American, is a man’s man, the strong head of his household. He also has a sense of duty to his heritage and agrees to harbor two illegal Italian immigrants, cousins of his wife Beatrice who steal into the U.S. for different reasons – Marco, the elder, to find desperately needed work in order to provide for his starving family back home, and footloose young Rodolpho to try his luck in the fabled land of opportunity.

No sooner do Marco (played by Eddie Diaz) and Rodolpho (Tommy Rivera-Vega) show up than Eddie’s niece, Catherine (Ayssette Muñoz), is swept away by the young man’s beaming charm and multifarious talents. They begin dating, without so much as a by-your-leave to Eddie, who reacts by warning everyone who will listen that the kid just wants to use Catherine as his ticket to U.S. citizenship.

Eddie is also wary of Rodolpho because of his skills at singing, sewing, dancing. Whereas Marco is a man like Eddie, Rodolpho is emphatically not: “The guy ain’t right,” Eddie declares. In a swift sequence of events, the protective uncle propels his concerns over the brink of disaster. 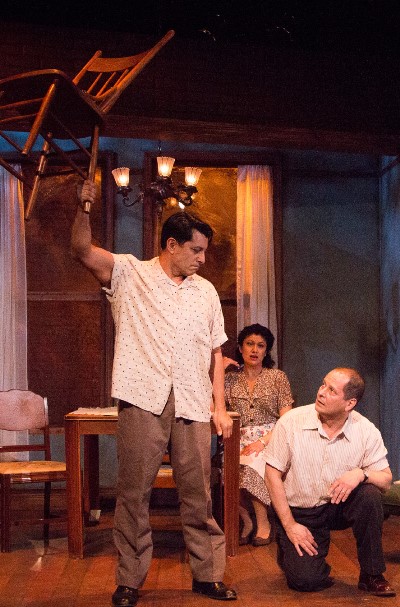 “One of the things I love about this play is how it can work on so many levels,” says Camín. “Its meaning is whatever the audience wants to take from it. I’ve had friends who’ve come to the play tell me that on a subconscious level, Eddie is sexually attracted to Catherine and others say he’s just looking out for her. Or that Rodolpho really is gay, a word that was never used in those days. Remember, most people thought Liberace was straight.

“Eddie has raised that girl since she was a baby. Every time somebody reminds him that he’s only her uncle, it’s kind of insulting, like a little stab. He has worked and sacrificed for her. It’s hard learning to let go of somebody you’ve raised. I have a daughter 6 years old, and I think about that. I try to enjoy every minute of the day I’m with her. Maybe there’s been too much emphasis on the lurid, incestuous attraction that Eddie may or may not have toward Catherine.”

Reminded that Eddie’s wife Beatrice (played by Sandra Marquez) at one point confronts him directly with that possibility, Camín notes the stunned man’s response:

“He says, ‘Is that what you think of me?’ For Eddie, it comes out of left field. He has defended his protective position all along. He wants Catherine to have a better life than his – get a job in an office, meet a nice young man of a better class. In theory, as a father you know what you want for your kids, and that time rushes up before you even know it. Life catches up too quickly.” 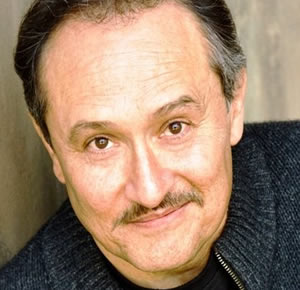 Camín says that while director Ricardo Gutierrez gave him free rein to play Eddie as he saw him, the director also posed the crucial hard question:

“Ricardo asked me this: Suppose she did go to work and meet a professional guy. Would he still have a hard time letting her go. I said yes, but not as hard as with Rodolpho, who is illegal. He wants something better for her and being with an illegal immigrant – and a longshoreman – is not doing better.”

When Camín talks about longshoremen and the gritty working-class life, he’s speaking from first-hand experience. Born in Spain to a Cuban father and Spanish mother — “I’m very proud of my heritage” – he spent his childhood on Manhattan’s west side, in Hell’s Kitchen.

“My friends were working class, and a lot of my classmates’ fathers were longshoremen. A couple of things stuck with me. When you’re the son of immigrants, as Eddie is, you keep some of the traditions your family came from, but you also tend of overly romanticize them. Your vision of the values of your home country and actuality may not be in sync. I moved back to Spain as an adult and found that to be true. 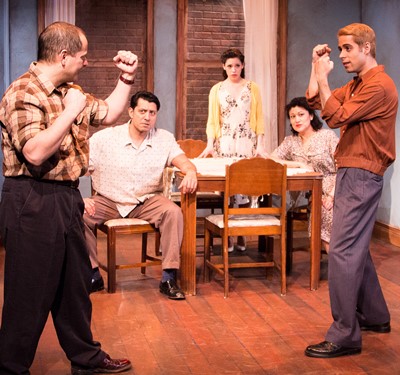 “Eddie takes pride in being a working man. He has a clear idea of what it is, and isn’t, to be a real man. Respect is important. At the beginning of the play, he has respect and authority. The minute Marco and Rodolpho arrive, he sees his situation being undermined by everybody, even by Beatrice. She’s jealous of Catherine and really pushes the girl toward Rodolpho. Beatrice points out to Eddie that he hasn’t touched her, his own wife, in three months. He defends himself by saying the household has become a shooting gallery. But she wants Catherine out.”

Recalling an incident from his Hell’s Kitchen childhood, Camín illustrated what real authority looked like in those immigrant households.

“I knew a Puerto Rican working class family whose father was like Eddie. He had a daughter and you had to ask his permission to go out with her. We called him Batman because he once chased his daughter’s boyfriend down the street with a baseball bat.”

Just as “A View From the Bridge” operates at a visceral and intensely emotional level, it also elicits strong feelings from audiences, says Camín: “I hear a lot of different takes. ‘The poor guy was just trying to protect his daughter,’ and ‘Rodolpho should have died.’ One friend said, ‘You were good, I really hated you.’”