On some deep level, beneath her leaking bitterness and frustration, Margaret, the beaten down single mom and flinty antagonist of David Lindsay-Abaire’s “Good People,” may be the bed-rock, salt-of-the-earth “people” the play’s title refers to. That goes as well for the little circle of friends who share Margaret’s squeaking-by economic niche in South Boston. It’s just harder to see in Margaret. 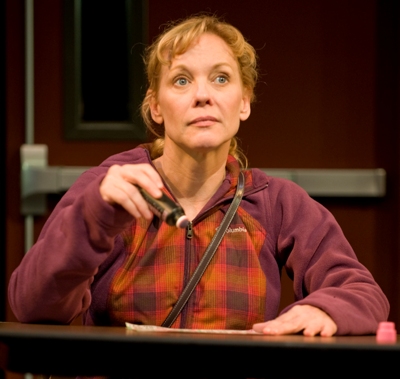 It’s also the raw beauty of Mariann Mayberry’s abrasive portrayal in a Steppenwolf Theatre production of “Good People” that goes right to the core of Lindsay-Abaire’s study in hope, heartbreak, despair and the mortar that often keeps life itself from crumbling: friendship.

Margaret, who has a 20-year-old, severely retarded daughter from a teenage romance, suddenly finds herself out of work – again. She pays rent to share the home of her friend Dottie, and she relies on a baby-sitter to care for the grown child who can’t be left alone. That fragile situation has now cost Margaret yet another job.

At her wit’s end, she looks up an old high school sweetheart she hasn’t seen in years – Michael, who escaped from the projects, became a doctor and resides in the posh neighborhood of Chestnut Hill. Mikey might have some office work she could do. Mikey blows her off, or tries to. But Margaret is a Southie through and through, which means she calls things by plain names As Keith Kupferer’s Michael grows increasingly uncomfortable and evasive, Mayberry’s resentful Margaret progresses from spiteful to vitriolic — in an edgy scene at the doctor’s office that sets up the really nasty encounter that follows at his home. 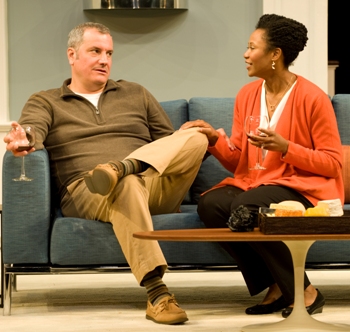 “Good People” unfolds in sharply drawn set pieces, and its center falls at what might be called The Invasion: Margaret shows up, quite unexpectedly, at Michael’s home where he and his gorgeous, younger African American wife Kate (Alana Arenas) are picking at the frayed threads of their marriage. What ensues is hardly less funny than the free-for-all for two couples in Yasmina Reza’s “God of Carnage,” and the emotional devastation is more complete. There’s also one good smashing – at  least one.

In short, the scene is a tour de force by Lindsay-Abaire, managed at a finely calculated pace by director K. Todd Freeman and played to a fare-thee-well by Mayberry, Kupferer and Arenas. Trying to be a civil hostess, but also curious to learn some things about her husband, Arenas’ elegant Kate plies Margaret with questions eliciting answers that evolve from straight to petulant to slashing. But my favorite line in the play may be Margaret’s shortest, and it occurs while Kate is out of the room: Michael, who has poured this Southie girl a glass of red wine, asks her how it is. Her instant answer is above price. 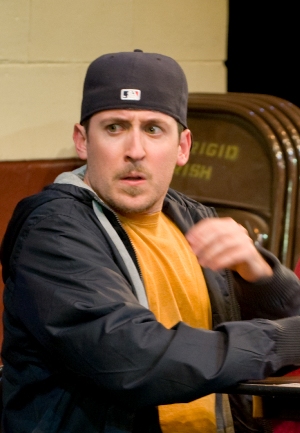 If this dust-up chez Michael is the play’s centerpiece, the last act brings Margaret back to her pals – Molly Regan as the pragmatic, somewhat dopey landlady, Lusia Strus in a deliciously brassy turn as Margaret’s protective friend and Will Allan as the young store manager forced into firing Margaret as the play opens. It’s a different Margaret we see, not a defeated soul but one who has found grace and absolution where it always was, among her fellow Southies, this salt.

Lindsay-Abaire’s play is intimate stuff, and its unfiltered power is magnified by designer Walt Spangler’s narrowly focused, naturalist set and by Kevin Rigdon’s graphic lighting. Dialect coach Eva Breneman deserves a bow as well for an accent that’s consistent among the Southies and just hinted at in Michael’s carefully reconditioned speech. Arenas’ Kate, on the other hand, speaks in the perfect voice of a perfect place where red wine is poured, and Margaret can never be at home. 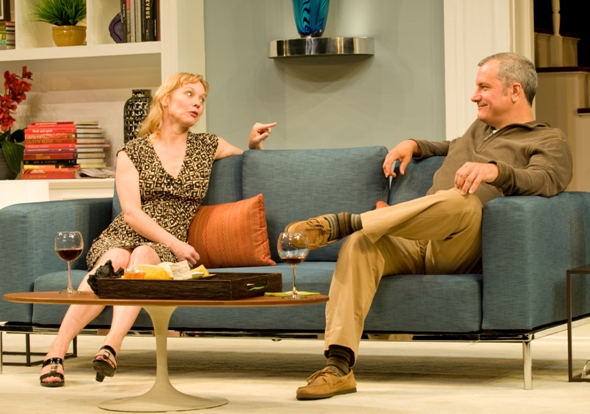