Somewhere in the second act of David Hare’s love-meets-politics play “Skylight” at Court Theatre, the thought occurred: A late-comer could walk in at any point and quickly come up to speed on the shouting match between the young woman with a social conscience and the older guy with a social prejudice who keeps jabbing at her with the double-edged blade of logic and psychological insight. That, I suppose, is the upside of redundancy. 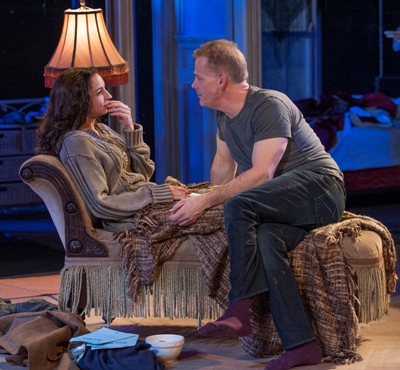 Clever and often roaringly funny as “Skylight” may be, and for all the spontaneous vitality and wit summoned by director William Brown and a superb cast, the fulsome wrangling between the voices of good and gain finally outdistances even the moral issue at hand. Nonetheless, before argument got swept under the treadmill, I found much to admire and savor in the sorry self-parody of a middle-aged man, the missionary zeal of a woman who has found her independent path and, not least, the detailed meagerness of designer Todd Rosenthal’s lower London apartment set. 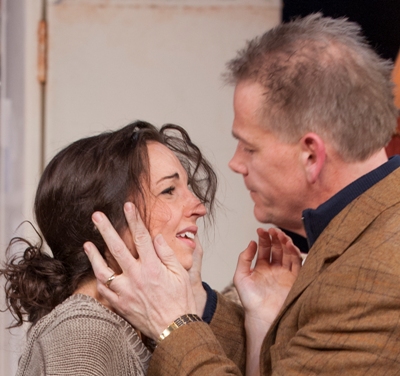 Wealthy restaurant entrepreneur Tom Sergeant, getting on toward 50, and school teacher Kyra Hollis, 20 years his junior, are former lovers who haven’t seen each other in the three years since the death of Tom’s wife. Now he shows up at her modest digs, sort of hat in hand and wondering how she’s doing. We soon learn that Kyra was close to both Tom and his late wife, who upon discovering their longstanding affair reacted with quiet, bitter anger.

But now the inconvenient missus is gone, Tom—having cared tenderly for his spouse during her extended illness, even building her a beautiful new bedroom with a large skylight—is back in Kyra’s world. Of course, that world has changed and Kyra has found her special place in it as a devoted teacher of children at risk. She also seems to be quite content living in this walk-up apartment where a sweater seems to provide her primary source of heat.

None of this can Tom understand. He chides her as well for the way she makes chili, and expresses utter dismay at the substance she hands him in the name of cheese for grating. He could have a selection of cheeses, including decent parmesan, sent round to her weekly. All she has to do is ask. 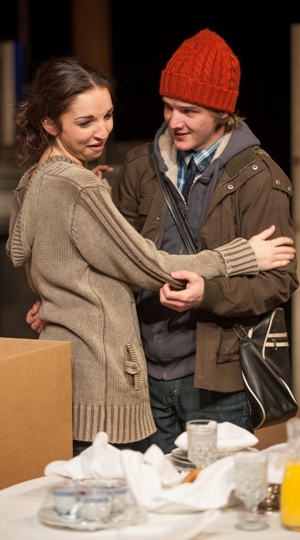 Any quick summary of “Skylight” might give the impression of a two-hander. It isn’t. Besides Tom (the expansive, savagely funny Philip Earl Johnson) and Kyra (played with studied self-sufficiency and moral purpose by Laura Rook), there is Tom’s “terrible son” Edward, whose personal torment and better qualities we find persuasively embodied in Matt Farabee.

Yet it is Johnson’s set-filling, stage-savvy presence that makes this production fly. A one-man theatrical riot, Johnson brings to the self-made Tom Sergeant a certitude about the nobility, indeed the cosmic necessity, of personal achievement that brooks nothing so nominal as spending one’s life—and squandering one’s brilliance—working the mean streets to help make a better world one child at a time.

Here’s the model alpha male, the gung-ho CEO who sees a perfectly logical next move in reclaiming Kyra and restoring things to the way they were. When Johnson’s good man of business, whose driver is waiting downstairs in the Mercedes, takes a look around Kyra’s dreary apartment and says, “I could get used to this,” he believes himself serious but he’s also unwittingly mocking himself, which he does early and often throughout the play.

Tom may be morally blindered, but he’s no dope. And if Kyra—clear-sighted, purposeful and committed—now sees him in a new light, perhaps for what he is, they know each other. When he suggests that she has embraced this quasi-monastic life to recapture the hardship of her youth, the privation endured by her father, she replies with vehement denial. Tom lets it go at that, but a psychoanalyst surely would press on.

If this were a tennis match, you’d have to say Tom holds serve most of the game. We come away amused and impressed by his drollery and confidence, and certainly by Johnson’s aggressive, precisely gauged performance. Rook’s reborn, or at least reconstituted, Kyra plays her defensive game with an appealing mix of wariness and vulnerability. Indeed, the initial insinuation, then growing intensity of Kyra’s uneasy dance with Tom bespeaks the pervasive fluency and honesty of William Brown’s direction. Would that Hare had been less enamored of his own verbal virtuosity and shortened up the fight.

Even the food preparation in this production is accurate. Rook handles a knife like someone who cooks, though sectioning onions before peeling away the outer skin would not be my method. I prefer to halve them, leaving the root areas intact, then strip away the skin and chop. But I wouldn’t presume to tell Kyra how to do anything. That was Tom’s first mistake.