Vanda careens into the playwright-director’s audition room as if she’s been tossed there by the storm that’s booming and flashing outside. Hair tousled, mini-skirted and discombobulated, she wrestles with her wet umbrella and a large bag she’s brought, spewing F-words as the amazed author looks on. But Vanda has only begun to amaze this guy, Thomas, in David Ives’ startling play “Venus in Fur.” It’s an incendiary night out at Goodman Theatre. 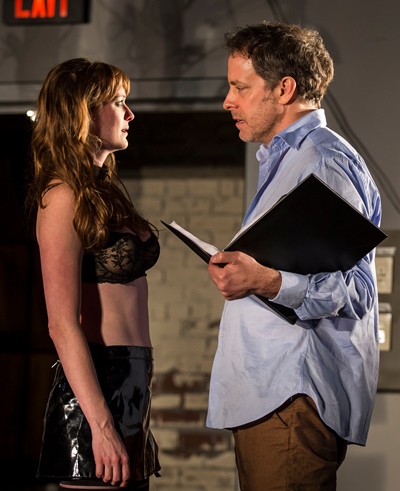 The name of Ives’ play is also the title of the internal play — Thomas’ brand-new work for two actors, and Vanda just happens to be the name of his female character as well. What are the chances, right? The certifiable ditz now standing before Thomas notes that improbability as she gets ready to read for him, which he really, seriously does not want her to do.

It’s been a long day of fruitless auditions for Thomas. He’s tired, discouraged and can’t face another mindless wannabe actress who couldn’t form a crisp consonant if her contract depended on it. But Vanda came to read, and read she will. She has glanced at the part on the train, and she’s at least heard of the late 19th-century novella by Leopold von Sacher-Masoch – whose name gave us masochism — on which this new play is based.

OK, OK, says the overwhelmed playwright, so read. Vanda does, and it’s beautiful. It’s incredible. Measured, insightful, sophisticated, her tryout is everything Thomas could have wished for. But when Vanda pauses to ask how she’s doing, the raspy voice and witless babble return. Thomas cannot square the one with the other. But in character, Vanda is just, well, thrilling. 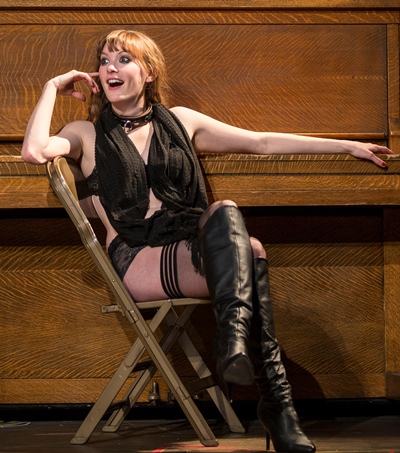 Amanda Drinkall is the complete, imponderable package as mysterious, sexy Vanda, who keeps taking off more clothes as she gets into the allure of Thomas’ character and soon draws the playwright into role-playing the sado-masochistic games at the core of his work. As the fascinated, indeed euphoric author, Rufus Collins offers a kind of straight man in this dark comedy as the two Vandas begin to blur and his own place in it grows likewise ambiguous.

Ah, there’s the operative word, or rather one of two. Thomas keeps reminding Vanda of the ambiguous relationship between the character she’s playing and the man, who implores the lady to make him her slave, to beat him, humiliate him, do to him whatever her imagination might conjure. But time and again, Vanda the sometime ditz jumps in to supply the word “ambivalent” rather than “ambiguous.” Drinkall is hysterically funny as she blurts out this malapropism that sounds so like the right word, Thomas’ word. And Thomas, rolling his eyes, keeps correcting her. 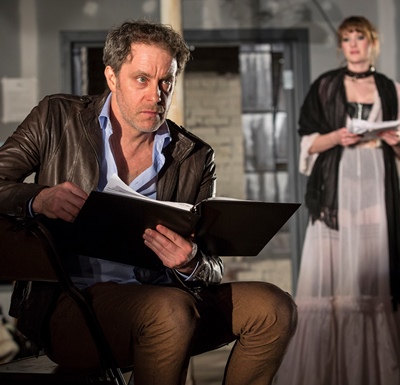 But in truth, Vanda the paradoxical ditz is using exactly the right word, as she makes clearer and clearer. It is Thomas who doesn’t get it. Why, she asks, has he written this play? Is this tale of Venus, naked beneath her casually draped fur, the playwright’s own unconscious fantasy? And who’s dominating whom, really?

How, Vanda inquires rhetorically, does Thomas regard women generally? Not in a very generous light, perhaps. What’s rumbling around in the back of his head when he’s having quiet sex with his significant other? To Vanda’s way of thinking, Thomas exudes ambivalence.

As the increasingly mysterious Vanda plows deeper into her sensual, contemptuous character, she also goes completely off book. And Drinkall makes that transition with consummate aplomb. The barely articulate air-head has practically mutated. When Thomas demands to know how Vanda could deliver her lines verbatim without even glancing at the script, she brushes off the question – as well as the next, about how she also seems to know von Sacher-Masoch’s original novella cold.

Director Joanie Schultz keeps the two characters moving in figurative circles around each other, closing and separating, heating up and cooling off, their identities blurring. Designer Todd Rosenthal’s unadorned audition studio — albeit with brilliant skylight displays — leaves Thomas no retreat from Vanda’s eager role-playing. No matter. For him, it’s one step back and two forward anyway. 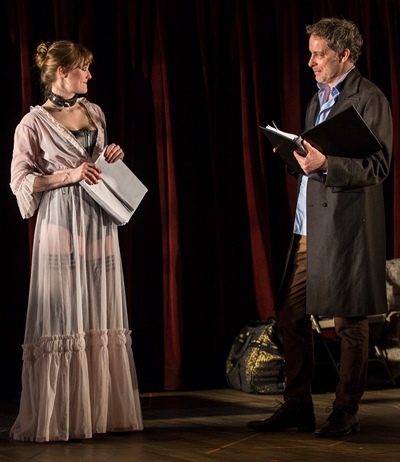 With the stormy night crashing on, vividly evoked by Keith Parham’s lighting and Mikhail Fiksel’s sound, Vanda turns overt seductress. For that role, she is ideally attired, a goth Venus from Victoria’s Secret. (Actually, she’s garmented by Jenny Mannis.) Drinkall’s temptress is also coldly, crudely direct. But Collins’ distracted Thomas is caught up in his sexually charged play, quite lost, relishing his part with an intensity that seems to sweep him over the line of impersonation.

As Vanda taunts him, coddles him, draws him in and sets him up, the reeling playwright begins to appreciate his Venus (the ancient Roman name for the Greek goddess Aphrodite) in a stunning new light – in a new robe, as it were. Perhaps it is borrowed. Perhaps not. Either way, the lady has his attention. And he faces serious issues. No ambivalence now. But like the accompanying thunder, ambiguity roars.