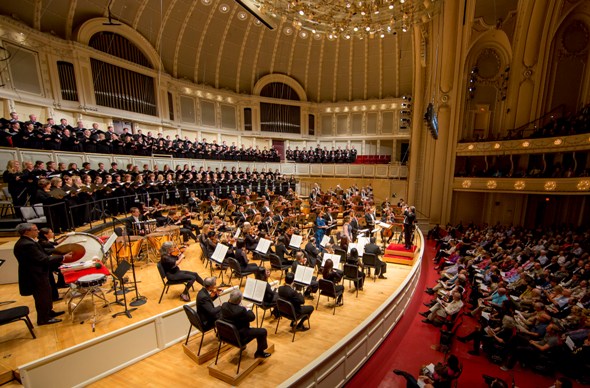 Tatiana Serjan is a flat-out thrilling dramatic coloratura soprano who exudes the temperament of a lioness. She is a Lady Macbeth in her early prime. Someday I hope to see her on the opera stage as the bloodthirsty Scottish queen, a role she has performed many times.

No hurry, though. This week there isn’t a better place to be than at Chicago’s Orchestra Hall, where the Russian-born Serjan is starring in Verdi’s “Macbeth” under seemingly impossible, that is to say ideal, conditions. She is helping to bring the Shakespeare-inspired tragedy to life,  in concert, with other opera stars emergent and the superb forces of the Chicago Symphony Orchestra and Chorus.

Numbering above 250, these musicians are under the direction of the best imaginable leader for such a project today, the CSO’s music director, Riccardo Muti.

Muti devoted 14 rehearsals over eight days to the local preparations, a rare luxury in the modern era. Singers and instrumentalists alike indulged in the opportunity to bore into the specific intent of every musical motive that Verdi penned, every word that he set, in service of Shakespeare’s gory tragedy.

The assembled forces are never more formidable than when they are engaged, together, in creating the barest of  barely audible pianissimo sounds to a dramatic end.  And as the sinister witches in diabolical three-part harmony, the chorus prepared by Duain Wolfe was quite other-worldly, avoiding the hackneyed caricature that spoils many a production.

The legendary drama starts innocently enough when Macbeth, a high-ranking Scottish soldier, believes he hears the truth from witches who prophesy he will be king. He shares the news with his exhilarated wife, who prods him to speed the inevitable. Together the two pursue their “sure thing” into shocking, bloody mayhem.

As Verdi idolized Shakespeare, and was his close and faithful interpreter, so is Muti to Verdi. This is a performance to make your hair stand on end. It’s also an opportunity to witness the vast array of musicians at work in their mighty, shared effort. Normally hidden away in an opera pit or obscured by stage activity, the orchestra and chorus are front and center with Verdi’s music as they create spellbinding sonic evocations of the royal couple’s psychic disintegration — vaulting pride, breathless fear, the gnaw of conscience, expressionistic horror.

The vigorously youthful, robust baritone Luca Salsi is a great Macbeth in the making. A confident warrior at the outset, his Macbeth is initially baffled, if secretly puffed-up, by the prophecy, a predictable human response that one can easily identify with, in striking contrast to Serjan’s predatory coiling. Lady Macbeth is the more inclined to deviousness. She’s also the sharper knife in the drawer and accustomed to the power of her wifely influence.

Salsi’s Macbeth is disarmingly open to his spouse’s vicious opportunism, then explosive and impatient once the murderous course is set. Together this soon-to-be royal couple dominates the opera’s opening act, as Lady Macbeth first learns of the news, awaits Macbeth’s arrival and vows to stoke his courage (“Vieni! t’afretta”).

Their joint hatching of a plan to murder the present king and feign innocence is a riveting sequence that must move with blistering speed from imagined act to a first deadly deed and then another. Serjan and Salsi kept all this sharply in focus, with intimate emotional pivots that turned on a dime, reflecting the hours of painstaking preparation they had put in with Muti on every vowel, color, sibilant and silent intimation in Verdi’s finishing school for monsters.

The audience response was electric to the satanic irony at the close of Act 1 (“Schiudi, inferno”), when the Macbeths, to preserve their cover, must join the angry crowd that summons God’s wrath on the assassins.  Salsi was at his most gripping in the Act 2 banquet scene, Macbeth’s expressionistic nightmare. Twice haunted by apparitions of the murdered Banquo, Salsi’s singing was the howl of a terrified conscience, while the queen’s attempt to distract the crowd with a reprise of her joyful brindisi amounted to the utter negation of its purpose, their guilt now openly suspected. The hellbent couple nevertheless hurtle toward more death and vengeance; their savage duet (“Ora di morte e di vendetta”) at the end of Act 3 is the height of their evil, and their fall from that pinnacle is swift.

Lady Macbeth is the first character Serjan worked on with Muti. She did the opera with him in 2011 in Salzburg and Rome, and the maestro has been working with her steadily on meaty Verdi dramatic roles since — Odabella in “Attila,” Abigaille in “Nabucco” and, later this year, Elvira in “Ernani.” 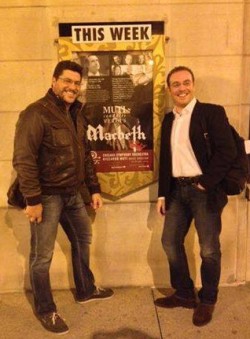 More recently Muti has also been grooming  both Salsi and the tenor Francesco Meli, who makes Macduff’s cameo solo, a powerful lament for his murdered wife and children, one of the opera’s great later moments. In 2013 alone, these three Muti favorites will have been with him for “I due Foscari,” “Nabucco,” “Macbeth” and “Ernani.”   They are deeply expressive singers — smart and well-matched — with glorious voices.

Banquo dies early in the opera, but the memory of Russian bass Dmitry Belosselskiy in his aria of  great foreboding lingers.  Tenor Antonello Ceron, as Malcolm, added his voice to Macduff’s in the valiant late rally of opposition. Soprano Simge Büyükedes and bass Gianluca Buratto set the stage for Lady Macbeth’s famous sleep-walking scene and otherwise enriched the ensembles.

As for the Chicago Symphony musicians, they provided the most evocative setting for the work that I have ever heard, not least for their weightless, lingering leggiero phrasing, a quality that goes straight to the heart.  Recently, the Muti-CSO “Otello,” from 2011, was released on disc, after a series of live performances similar in scope to these “Macbeths.” One can assume that the likelihood of a recording may have  influenced Muti to include the extensive off-stage band music and lengthy ballet sequences.

There is no doubt that Muti approaches his opera projects comprehensively, and he’s also a strong believer in performing these Verdi operas “come scritto” (as written). But of course in a concert version, the singers remain onstage and cannot take advantage of the breaks they are typically afforded in their characters’ entrances and exits.

With Acts 3 and 4 performed solid as they were, and with all the ballet music intact, Serjan waited a long time in public view before singing Lady Macbeth’s sleep-walking aria, “Una macchia è qui tutt’ora,” in which she famously obsesses over the spot of blood she can’t wash from her hand. It was the one moment in her night that she seemed somewhat spent vocally. Were it not for the promise of an another wonderful opera recording from this project, and the careful mic settings in stationary positions that necessarily accompany such an effort, I would wish for giving Serjan some leeway – a late entrance, perhaps, or a bit of stage to wander in.