Role Playing: Stephen Ouimette brews an Irish tippler with a glassful of illusions in ‘Iceman’

Interview: As saloon owner Harry Hope, the Stratford Shakespeare veteran drinks deeply from his first O’Neill role, at the Goodman Theatre through June 17.

It is Harry Hope’s grumpy largesse that fuels the pipe dreams for the drunken inhabitants of Eugene O’Neill’s play “The Iceman Cometh.”  And Harry, says actor Stephen Ouimette, who portrays the tragi-comic Irish saloon keeper in the Goodman Theatre’s production of “Iceman,” is one complicated lush. “He’s all over the place,” says Ouimette, a veteran of the Stratford Shakespeare Festival in his first O’Neill role. “I felt it from the beginning in rehearsal. Nothing seemed to line up. You can be very cranky in one moment and very generous and giving the next. And Harry’s an agoraphobic besides. He hasn’t gone outside in 20 years! That blows my mind.

“But the way comedy and tragedy are right next door to each other is true for every character in the play. It’s like slalom skiing. It’s never dull.”

Yet getting a true bead on Harry Hope confronted Ouimette with one more challenge, one more interpretive layer: mastering an Irish accent, for the first time in his 35-year career.

“We’ve all heard the bad ones,” he says with a dry laugh. “I didn’t want a Lucky Charms accent. I’ve acted in different accents, but Irish is like a different mindset. I worked really hard at it with a dialect coach, then I show up at rehearsal and discover that one of the Goodman interns is from Dublin. I was afraid to open my mouth. But one day she gave me the thumbs up. She says, ‘You sound like every crabby Irish guy I’ve heard my whole life.”

Harry Hope owns the bar, which makes him something of a success amid its boozy, escapist denizens – whose numbers indeed include Harry himself.

“He was always driven to do well by Bessie (his late wife, deceased these 20 years),” says Ouimette, “but once she was gone, the little alcoholic living inside him popped right out. He has a certain amount of status. He controls the booze and sometimes he snaps at people, but they all know he doesn’t always mean what he says. “Still, Harry has to believe he has some power in the establishment. That was the hardest thing about getting him right: In his head, he’s at the top, but in truth he’s just there with the rest of them, buying into his pipe dream, sleeping at the bottom of the sea.”

The defining phrase in “Iceman” is pipe dream. The day we drop in on Harry and his pals, they’re all waiting in bleary expectation for the periodic arrival of their vindicator-designate, their only remaining link to the outside world and the greatest boozer of them all: the traveling hardware salesman Theodore Hickman, the beloved “Hickey” (Nathan Lane).

This is no ordinary visit, but an occasion of parts. It is Harry Hope’s birthday – his 60th, and the 20th anniversary of dear, chiding Bessie’s death. But a stone-cold sober Hickey arrives bearing an unexpected gift: the plain truth about their pipe dreams. He has seen the light, he says, and he’s here to spread the happiness that comes with shedding illusion. “He destroys their community,” says Ouimette. “Hickey says he wants to make them as happy as he is, but in reality he isn’t happy – he’s insane. He’s like a lunatic who shows up at the hospital to fix everybody.

“‘Iceman’ is about O’Neill’s own quest for happiness. He was wrestling with his own demons. He even attempted suicide. He wrote this play while he was working on ‘Long Day’s Journey into Night,’ and needed a little comedy for distraction. This play made him laugh. O’Neill knew all these characters. He lived in a flophouse when he was young.”

While Hickey’s gambit sends shockwaves through Harry Hope’s saloon, and all its occupants – Harry among them – try to acknowledge their self-delusion and face the real world, the epiphany fades with the revelation of Hickey’s madness.

“They rebuild,” says Ouimette. “They choose to go back to what they knew, but with new knowledge. They can’t go back entirely. But that’s also their hope, that living with a pipe dream isn’t such a bad thing. And as they all come back and say their bit assessing Hickey, it’s like they’re coming home for Harry Hope.”

“Harry makes fun of you or rides you, and he’s irascible, but that’s OK because he’s also quick to apologize.” Typical of such affectionate testiness, he says, is Harry’s relationship with Larry Slade (Brian Dennehy): “I think Harry likes him, but he also assesses Larry’s life precisely. Larry (a disenchanted former anarchist editor) is known around the saloon as an old wise guy, but Harry sees through that. To Harry, he’s a damn-fool old anarchist, one of the I-won’t-workers. Larry says he’s done with pipe dreams, but Harry says he should just get a job and stop whining.”

Ouimette and Dennhy were well acquainted from co-starring in productions at the Stratford Shakespeare Festival. In 2011, they appeared together at Stratford in Shakespeare’s “Twelfth Night” and Harold Pinter’s “The Homecoming.” But Ouimette hadn’t worked with Nathan Lane and didn’t know what to expect from this Broadway and film star best known for musical comedy. He quickly got his answer.

“Nathan arrived at the first rehearsal off-book (his role fully memorized), and in a full suit of clothes.”

Of Hickey’s final, prodigious monologue, Ouimette says: “You have to sit and be dead and listen to it. It’s a meditation on madness and love and pipe dreams. It puts you in a hallucinogenic state. Hickey repeats everything over and over, but the repetitive nature is necessary to achieve that.

“I’m always surprised by what else I keep discovering in this text. It’s like Shakespeare. You’re finding new things to the last performance. The language is beautiful. The rhythm of the writing is quite musical. Bob (director Robert Falls) didn’t use extra music. You don’t need it. The music is in the text. It’s like playing in a really good orchestra and knowing your part. You don’t want to embellish it too much. When somebody does an extra slap on the table, it’s like coming in with a pot and spoon.”

As for the essential meaning and point of “Iceman,” this now-experienced Harry Hope, speaking near the end of the Goodman run, demurred: 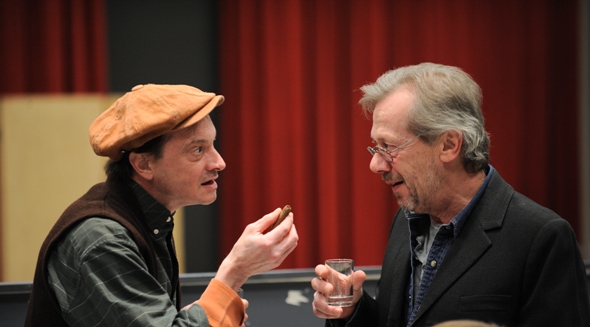