‘Playboy of the Western World’ at Raven: A killer on the lam, town eager to crown him a hero

Review: “Playboy of the Western World” by John Millington Synge, at Raven Theatre through April 5. ★★★★

We cannot watch or read the likes of Brian Friel’s “Translations” or Martin McDonagh’s “The Cripple of Inishmaan” without sensing the sublimated presence of John Millington Synge’s 1907 comedy “The Playboy of the Western World.”  It is a cornerstone of modern Irish theater, and it’s all there in Raven Theatre’s idiomatic staging — the brisk dialect and wry humor, the tumbling physicality and muted hues, the seed and genesis of everything we love about Irish drama in the present tense. 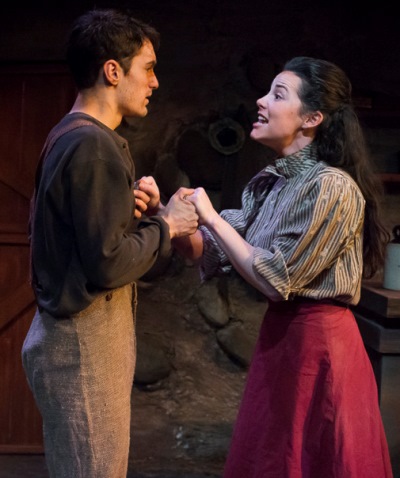 Synge’s playboy is hardly a swinger in the modern sense of the word. The term in that time and place refers to a fellow who edges through life on his wits and without much moral compunction – a con artist. Nor does “the western world” suggest a cosmopolitan life. In rural, fairly isolated County Mayo on Ireland’s west coast, where the play is set, the western world means western Ireland, the whole sparsely populated countryside thereabouts.

For these folks, the world presents a closely limited aspect, the daily routine is fixed and any event is news. (We see this again in the inflated minutiae regularly reported by self-styled news-bearer Johnnypateenmike in “The Cripple of Inishmaan.”)

The big news at the local pub in “Playboy of the Western World” is borne one night by its perpetrator: Christy Mahon, a local twenty-ish farm lad, plunges into the nearly empty joint to announce he has just killed his father. Far from inspiring horror and rebuke, Christy’s declaration elicits admiration and respect. Here’s a fine young rogue, an authentic playboy of the western world. 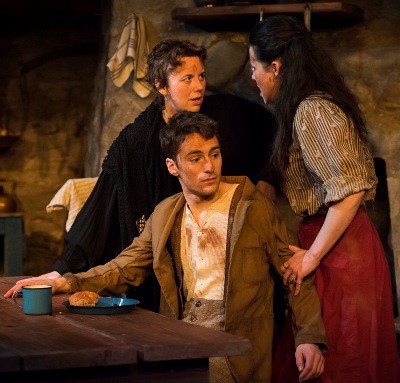 The men embrace him, the lassies as well – all of them, and eagerly.  The problems begin when “dead” Dad shows up at the pub, rather banged about the head but alive all the same. Christy’s celebrity is shaken, and the adulation begins to sour. If he is to restore his roguish image, and get the girl, Christy must act – quickly and decisively.

Sam Hubbard, instinctively charming and ironically innocent, is Raven’s playboy in a pickle, a young man who thinks he’s a murderer and soon figures out that what the locals really want from him is a proper telling of the tale. Hubbard makes appealing misery of Christy’s quest for the pub owner’s pretty but steely daughter Margaret, called Pegeen Mike, played with imposing spunk and a disarming smile by Jen Short. 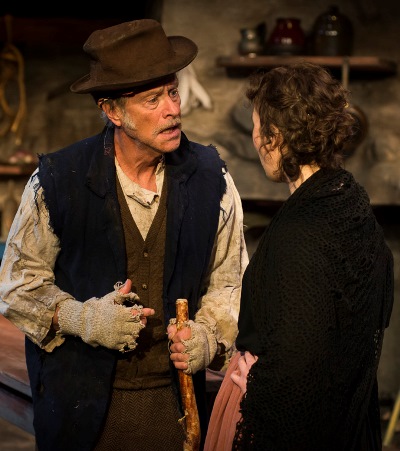 This flint-and-stone pair are surrounded here by several winning portraits of characters caught in the storm stirred up by Christy’s dubious miscreant. First and most colorful among these is Lawrence Garner as the young man’s dazed but still curmudgeonly dad. One look at the hard-headed old block and you can see how this chip, the almost-killer Christy, might be a hell-raiser in the making.

As the young widow Quin, who turns her zest for life on the likely new arrival, and thus becomes Pegeen Mike’s rival, Sarah Hayes exudes unvarnished passion to go with the savvy to size up a situation and a bargainer’s wit. But whereas she’s a credible woman of the (western) world, the other village women who swoon over Christy are caricatures bordering on farce – the one aspect of this rambunctious enterprise that director Michael Menendian does not seem to have firmly and fluently in hand. 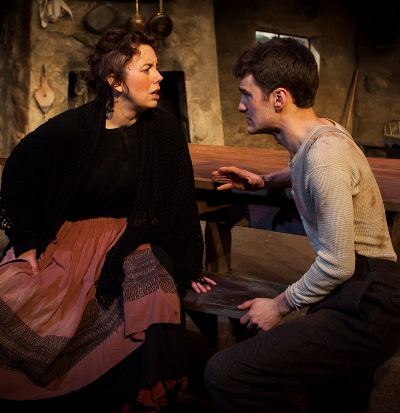 On the gentler side, Matt Bartholomew is appealing as the almost-stern pub owner (and Pegeen Mike’s dad), who manages the bar well enough but is surely losing the clash of wills with his temperamental daughter. And Graham Emmons is a delightful Ichabod Crane type as Pegeen Mike’s shrinking violet of a fiancé.

Here’s one instance where the dialect coach, Jason K. Martin, probably should get marquee billing. The Irish accents are solidly ingrained and consistent across the cast through rapid-fire exchanges that demand a speedy aural adjustment. Set designer Andrei Onegin certainly can take a bow for his simple, rough-hewn but deceptively detailed pub. And costumer Alaina Moore’s humble garments speak eloquently of the hard life in this little corner of the world.