At the start of John W. Lowell’s play “The Letters,” the interview between an employee called Anna and her boss suggests a familiar ordeal most of us have been through, and survived well enough: a job performance review. Then, by degrees, we watch the inquiry grow more personal and intense. The game, and with it the stakes, has changed: Anna’s life is on the line.

This harrowing dance for two actors evolves into a dramatic tour de force at Writers’ Theatre, where Kate Fry and Mark L. Montgomery bring prey and predator to feverish plausibility, and director Kimberly Senior sustains the tension at breath-catching pitch. 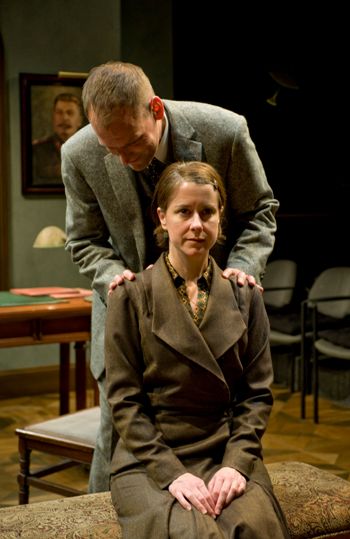 Though written scarcely 15 years ago, “The Letters” is set in early 1930s Russia, during the reign of Josef Stalin and inside the administrative labyrinth of that brutal regime. Yet the play’s political message resonates as timeless, indeed as a universal inversion of the proposition that the truth shall set you free. That’s the cat-and-mouse game in play: truth and traps, the one as craftily concealed as the other.

Anna is an editor in a government bureau that reconditions historical documents to make sure they are politically suitable for public consumption. The matter at hand is a collection of personal letters written by a famous composer – indeed, by the supervising Director’s reckoning, the motherland’s greatest composer. The problem is that the letters contain graphic descriptions of sexual encounters: implicitly homosexual, disgusting stuff, the Director declares, that would taint the nation’s reputation if it ever reached the outside world. The composer’s identity is never revealed, and it doesn’t matter.

What matters is that Anna has been summoned to the Director’s office, where pleasant meetings never happen, to be told she’s getting a promotion. But then the Director’s cheerful, albeit ever so slightly ironic, tone shifts just a little and what began as praise modulates into a sly, increasingly pointed interrogation into Anna’s personal life, her relationship with her co-workers and an official concern about those letters that points toward a deeper, far more threatening issue. 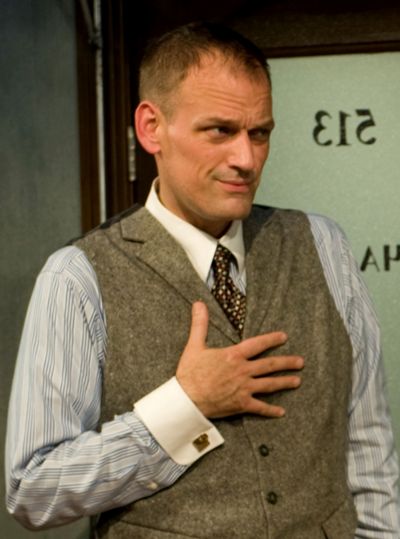 Montgomery cuts a coolly menacing Director, leading his subordinate on with outwardly innocent questions, then catching her in  little inconsistencies, which he dismisses as unimportant even as he’s tallying the sum and building his unsuspected case against her. Rather like comedy, it’s the precise timing of exchanges between Montgomery and Fry that gives this thriller its potency.

If Montgomery’s Director is the constant, calculating and dangerous, Fry provides the variable that injects the play with its energy, anxiety and edge. Fry’s Anna is no political fool, and once she understands the game, terrified as she is, she parries the Director’s thrusts with a quick and sharp wit. Just as we see this deadly match through Anna’s eyes, we sense its pitches and turns through Fry’s finely measured gamesmanship.

The tiny performing space of Writers’ smaller theater provides an ideal frame for a play of such psychological urgency. Idealized portraits of Lenin and Stalin loom over the Director’s desk. The piercing eyes of these iconic figures redouble the heat of the Director’s glances at Anna, and we – almost able to touch the two grappling characters – feel the portraits’ mystical power as well. 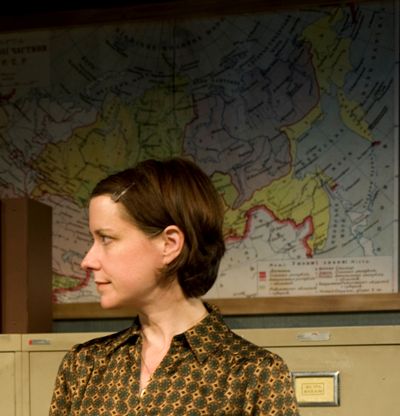 When all the carefully formed i’s are dotted and the t’s crossed, “The Letters” ends in a stunning place, where power and truth both prove to be relative concepts.