‘Solstice’ at A Red Orchid: In everyman’s land, house divided crashes down on life, innocence

Review: “Solstice” by Zinnie Harris, at A Red Orchid Theatre through Feb. 23 ★★★

It is a tragedy as timeless as it is trackless, Zinnie Harris’ “Sostice,” now in a searing U.S. premiere run at A Red Orchid Theatre. Tellingly, the play is set nowhere in particular, though more or less in the present. But the divided people, the shattered family, the loss of innocence, the appalling cost of violent conflict – these things register with immediacy, with photographic clarity. 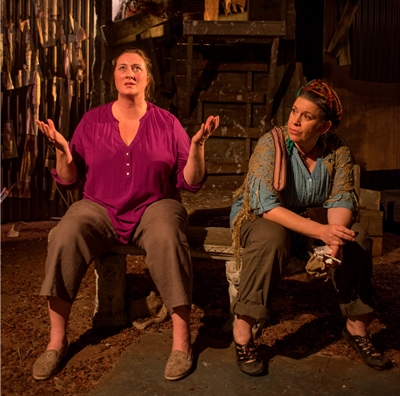 Michael and Terese, with their teenage son Adie, are villagers living in very modest means. In this strife-torn country, they’re literally on the wrong side of the river. The electricity is dicey, the phone only works on Mondays, the streets are muddy. Things are much better on the other side. But Michael and Terese have always lived here. They don’t require much and they wouldn’t dream of crossing that bridge for something better. Yet this will be the summer of their discontent, and we shall witness the agony of their longest day.

Michael, a religious man who adorns their home with images of saints, provides meagerly for his family by making candles. Terese is ill, though she tries to hid it. They don’t really talk about that or much of anything else these days. The boy Adie comes and goes, unquestioned by his parents. But the political situation is deteriorating. Bad feelings have increased between the communities on the two sides of the river, and violence lately has taken on the pallor of atrocity. Word is that officials across the river plan to evacuate Michael and Terese’s community and begin blasting for minerals. 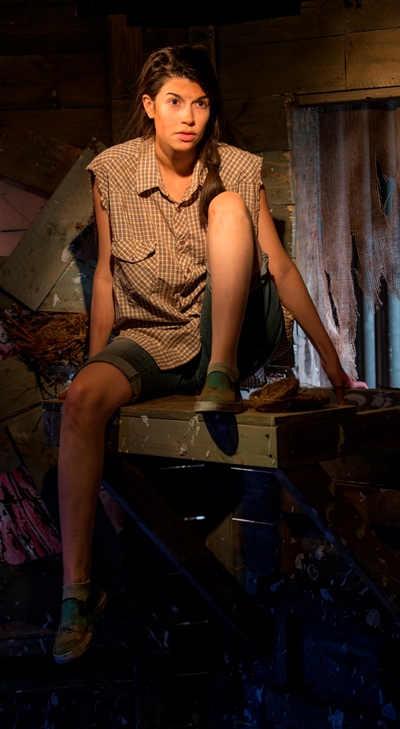 While Michael greets all of this with benign acceptance, counseling that bad times blow in and out and violence is not God’s way, Adie and his pals wade deeper and deeper into the fray – despite the seasoned caution of a girl their own age who sees only calamity at the end of the boys’ impetuous course. The girl, Sita (played by Sarah Price with wide-eyed vivacity and urgent directness), serves much like a Greek chorus in a play that resonates of classical tragedy. She suffers, she sees, she warns. All for naught.

A Red Orchid’s production, directed by Karen Kessler and designed by Joey Wade and Aaron O’Neill, bears just the right aura of dramatic economy mingled with narrative sorrow. In the theater’s very small space, the sense of bleakness – like the sense of dread – is palpable. That said, the opening night performance collectively faltered in ways that not even some stellar efforts could entirely overcome.

Kirsten Fitzgerald shone in her understated portrayal of the gravely ill Terese, a woman who has pretty much given up on God. She sadly marvels at the rancor incited by a debate at church over which direction a few crusts of bread – the body of Christ – should be circulated amongst the parishioners. It is a splendidly ironic metaphor of the petty issues that drive human beings to mutual hatred.

But the exchanges between Fitzgerald and Larry Grimm’s Michael often felt halting beyond the point of dramatic emphasis, as if the needed spontaneity had yet to be fully achieved and the seams were showing. Indeed, one can imagine Grimm finding more depth and range in his laconic character as the run of “Solstice” progresses. 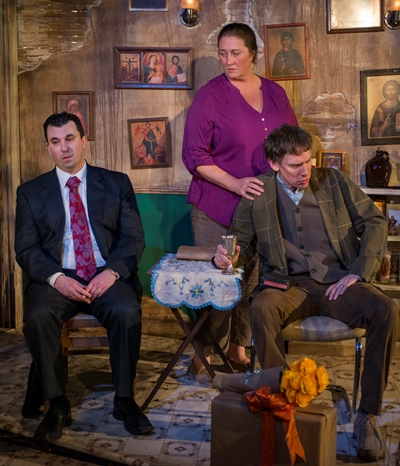 Steve Schine adds a strong presence as Terese’s black-sheep brother, who has gone over to the dark side of the river but now makes a valiant attempt to dislodge sister and brother-in-law before their world blows up. As Terese’s pal and confidante Hannah, who’s also loosely sketched as Michael’s one-time love interest, Meighan Gerachis provides an empathic listener for the sick woman – and for seemingly everyone else. But here and there, these sundry dialogues with Gerachis also could use a touch of directorial oil.

A case can be made that Harris’ play is as much about loss of innocence as it is about the folly and ruthlessness of adults. Throughout, and specifically in the end, it is the unmoored, ungoverned and terrified teenagers who elicit our particular sympathy. As Adie, the couple’s son but essentially just a kid adrift, Andrew Cutler offers a quiet, sensitive performance nicely counterpoised to the exuberance of Sarah Price as his girlfriend Sita.

The unsuspected star of this production, however, is Danny Luwe as Sita’s brother Jean. Though early in the going, Jean is little more than a tag-along with a more aggressive and feared friend (Kevin Matthew Reyes), in the end Luwe twice ratchets up the tension in scenes of unforgettable terror and, to the young actor’s great credit, poignancy.

“Solstice” is potent, disturbing stuff, a lamentably credible likeness of the perpetual conflict and misery that blight human history. Nor, by Harris’ lights, does the world end with a whimper.