As surely as the truth will out, so will literary genius, even if the latter eventuality involves a great deal of personal angst and interpersonal, well, relations and unleashes gales of laughter. I’m talking about Haven Theatre’s sharp-edged take on Theresa Rebeck’s comedy “Seminar,” a riotous exploration of language and style shared by a group of aspiring writers and their mentor as they delve between the lines and dive between the sheets. 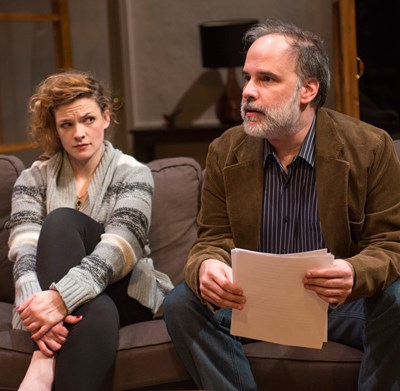 Four young writers pony up serious cash for the privilege of a private tutorial with famed writer, editor and pedagogue Leonard. What they don’t anticipate is the laconic side of literary craftsman Leonard. When he’s coaching wannabe scribes, this guy is a man of few words, most of which begin with F and all of which are aimed at gut level. While Leonard surely knows the word coddle, he’s more attuned to cudgel.

His class of four covers a range of experience and personality types.

Douglas, polished and precise with a creative writer’s flair, already has enjoyed some professional success. Kate, who lives in the posh New York apartment – owned by her parents — where the group meets, has been massaging one story idea for several years. 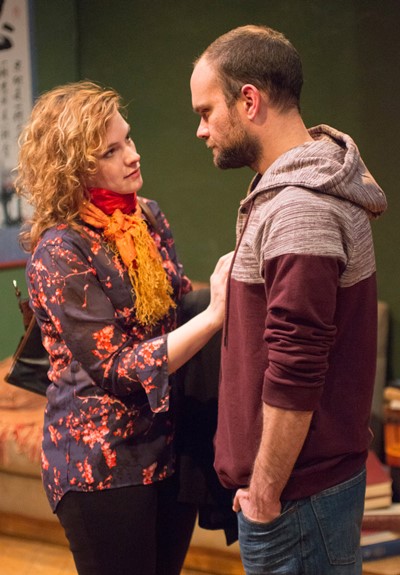 Martin, Kate’s ex-boyfriend, seems bright and insightful, but is loath to present an example of his work. Finally, there’s Izzy, a petite knockout whose real enthusiasm lies somewhere apart from writing. The lads in the group, mentor among them, man up to help Izzy find satisfaction.

The lynch pin is Leonard, ingrained by Tom Hickey with a checkered lifetime’s worth of unflinching truth about the literary game and how it works, how it can grind a writer down and deflect noble ambitions into plodding mediocrity. Leonard calls drivel by a more rudimentary name, and it doesn’t begin with D.

Hickey’s portrayal of this world-weary teacher graphically captures a man whose soul has suffered the slings and arrows of an opposing world. Not unlike Shakespeare’s melancholy Jaques in “As You Like It,” he is amusing in his cynicism, yet any intended humor is wry. Leonard loves good language – on the page, anyway – and he’s quick to give credit where it’s due. He can also be brutally dismissive, as Kate discovers.

Ah, Kate. Kate the curs’d. She can’t catch a break from Leonard, but no matter: Mary Williamson turns Kate’s misery into a stream, indeed a whitewater torrent, of comedic brilliance. With her impeccably timed pauses and barbs precisely aimed at their caustic mentor (usually in absentia), Williamson steals the show and pockets the audience. 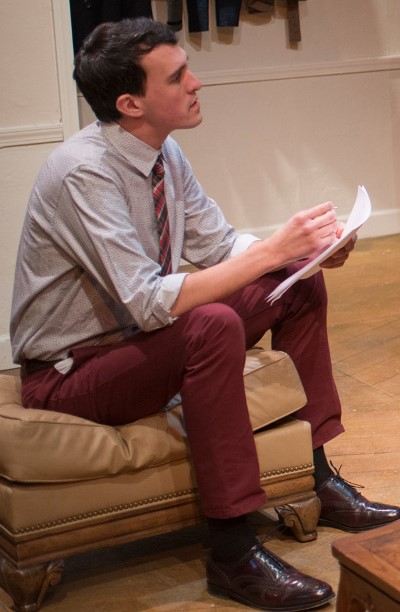 Through a ruse, Kate even gains her moment in the sun. No such device is required by Douglas, played by Carl Lindberg with the urbanity and confidence of one who has tasted literary recognition but also has the smarts to accept the counsel of a master. Lindberg’s adept, earnest Douglas elicits our sympathy — yes, sympathy, in light of Leonard’s icy palm-reading in which he spells out for the class exactly how Douglas’ literary career will go.

The odd writer out here is Izzy, who one might surmise has signed up in the expectation there would be men in the group. Atra Asdou is all charm and allure as an author whose most meaningful flourishes are, as it were, parenthetical. Even the eager young Martin finds his energy challenged in happy pursuit of her.

For that matter, will Martin ever emerge from the bedroom with a manuscript in hand? Keith Neagle’s carefully gauged performance as the perceptively analytical but reluctant Martin gives this production much of its edge. While Leonard rants and slashes and rebukes, Neagle’s hesitant Martin takes the mentor’s measure and decides the risk may be too great, that his ego may not be up for the bludgeoning. 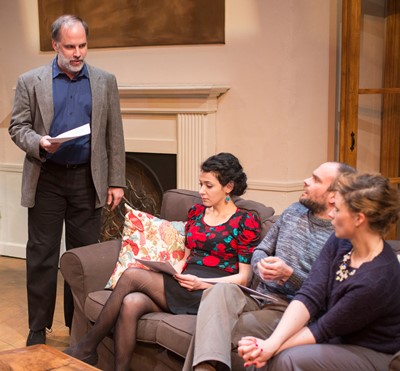 But faint heart never won a Pulitzer, a fact not entirely lost on Martin. It is when he steps up to the plate that “Seminar” makes its critical turn, and man and boy – one well might say father and son – square off in a blazing finale that transfigures hopes and redirects lives.

Director Marti Lyons imbues Rebeck’s play with an infectious spontaneity. We are very much in the room – designer Joanna Iwanicka’s tastefully appointed apartment — with these clever, ambitious young people. We sense the withering heat from Leonard’s tough love and the electricity in Rebeck’s taut dialogue. It is the crisp, charged, nuanced language of a master. A veritable seminar.