Articles tagged with: Broadway in Chicago

Of mortal frailty and monstrous transgression: Broadway in Chicago spotlights ‘The Humans’

Review: In the midst of Stephen Karam’s abrasive family drama “The Humans,” presented on tour by Broadway in Chicago at the Cadillac Palace Theatre, the question of monsters comes up. Monsters in dreams. And someone speculates that if humans dream of monsters, perhaps what strikes terror in the imagination of horrid fantastical creatures is the image of a human. It’s a fleeting exchange, but it lies right at the core of this group portrait of people grappling with dreadful reality, hideous betrayal, terrifying truths about themselves. ★★★★

In a ‘Curious Incident,’ a special boy grapples with the twists, turns and illogic of growing up

Review: Christopher is determined to a) solve the mystery of who has killed his neighbor’s dog and b) take a math advance-placement exam. The story that takes flight is music for the soul. Now playing through Dec. 24 at the Oriental, this brave and wonderful Broadway in Chicago national touring production is about the dignity of the adolescent passage, as seen through the eyes of a brilliant boy in constant danger of sensory overload, and his ever-present companion, a pet rat. ★★★★

Review: “Hey yo, I’m just like my country, I’m young, scrappy and hungry and I’m not throwing away my shot” is the clarion call of young friends in Lin-Manuel Miranda’s Tony Award-winning musical “Hamilton,” a contemporary re-imagining of our own history. The Broadway show’s first regional clone has opened at Chicago’s PrivateBank Theatre, where it will be for many months, probably years. ★★★★★

‘The SpongeBob Musical’ is deep-sea delight for kids, with a whale of a payoff for parents

In ‘Bullets Over Broadway,’ that rat-a-tat-tat could be tommy gun or sound of tap shoes

Interview: Cheech is just a garden variety thug, a gangster, a hit man – who proves to be the creative genius behind a hapless playwright in the musical “Bullets Over Broadway.” And Jeffrey Brooks, who plays this heavy with the fine dramatic touch, says Cheech is also “the most real character of them all, the one with the most heart.”

What good is sitting alone in your room? Willkommen to a beautiful, bleak ‘Cabaret’

Review: If there are two words not commonly associated with touring Broadway shows, they are daring and courageous. Both apply in stunning fashion to “Cabaret,” a not-to-be-missed experience presented by Broadway in Chicago at PrivateBank Theatre. ★★★★★

Love with knife in heart or tongue in cheek, Valentine’s Day brings out kiss and scratch

Critic’s Pick: In a tribute to the downside of love, Chicago theaters send superb “anti-Valentines.” If you favor sarcastic greeting cards on the subject of romance, and aloof lyrics about love affairs “too hot not to cool down,” here are some shows that serve up the subject of love on Cupid’s big day with an appropriate grain of salt.

Review: The musical “Pippin” is an eye-popping crazy-quilt of commedia dell’ arte, dazzling choreography and Cirque du Soleil acrobatics draped over a thin plot about finding the meaning of one’s life. The show’s most appealing qualities come together in the national tour now playing the Cadillac Palace Theatre. But as a musical drama that aspires to something more than glitzy revue, this once-forgotten venture wanders well wide of the mark. ★★★

Interview: New Orleans native Leslie Rochette, who plays – among a lightning paced scramble of other roles – Frankie Valli’s daughter Francine in the tour production of “Jersey Boys” currently at the Cadillac Palace Theatre, seems to have found a second home in Chicago. Knowing the richness of Chicago’s theater scene, Rochette made a bee-line for Columbia College to study theater, graduating in 2008. When the first national tour of “Jersey Boys” hit Chicago in 2012, Rochette was in the ensemble, and now she’s back as one of three women in the cast who all fill multiple parts.

‘First Wives Club’ delivers the songs and stars, but the new musical is still looking for its heart

Review: “The First Wives Club,” the movie, was a sweet revenge caper for three of the funniest forty-something women in the business. Now Faith Prince as Brenda the loudmouth, Christine Sherrill as the aging star Elise and Carmen Cusack as the ditherer Annie star in the Broadway-bound musical comedy “First Wives Club,” playing at the Oriental Theatre. The musical is a work in progress but it has several heady things going for it, including these leading ladies, who fall together in a D-line when their husbands try to dump them. ★★

Preview:The acute historical irony is that the hymn “Amazing Grace” — which is the subject of the Broadway-bound musical that opens Oct. 19 at Chicago’s Bank of America Theatre — was written by an English sailor, John Newton, who had prayed in terror during a storm at sea while engaged in the evil of the triangle slave trade.

16th in a series of season previews: Is Broadway in Chicago flourishing, or what? Whether you look at this high-profile presenter’s 2014-15 season in terms of sheer quantity or with an eye to its scope of appeal, the fall lineup alone – never mind what’s to come in the season’s second half — pops off the page with three premieres and the mega-hit “Disney’s Newsies.”

Review: It’s not often that a composer introduces his first Broadway-bound musical at the age of 64, but then Sting is the sort of artist who never stops spreading his wings. The great rock singer-songwriter has picked up collaborators from his work in film and television and he has even suffered the prolonged torture of a Disney animated movie that morphed so completely his songs were largely cut. Who better to tackle the cut-throat business of the Broadway musical?★★★★

Review: At last it’s summer, the season for ice-cream cones and books with fun as their chief nutritional value. It’s also prime for a Broadway in Chicago show on this fancifully ridiculous premise — that Barbra Streisand, who has designed a “shopping mall” in the basement of her own home, drives a hard bargain to purchase a doll, which she already owns, from the fella she has hired to tend the shops. And he says No. ★★★

Preview: Actor Michael Urie has never seen Barbra Streisand’s personal mall built into the lower level of her home – no, seriously, a street of ornate shops filled with her collections of antiques, dolls, gowns, etc. – but he says that after his long-running one-man comedy “Buyer & Cellar,” in which he plays the mall’s imaginary minder, he either will receive a personal invitation or he will be banned.

Preview: It was no great leap for Chicago native Allison Semmes to take on the role of Diana Ross for the national tour of “Motown the Musical,” which launches May 8 at the Oriental Theatre. Semmes grew up listening to the Supremes and other Motown sounds on her mom and dad’s vinyl LPs: “My parents say when I was about 3 years old, I was harmonizing with the vacuum cleaner.”

In ‘Starcatcher’ romp, goofy pirate lends a hand and Peter (Pan) learns no man is an isth-s-mus

Review: Despite the exuberant ridiculousness of “Peter and the Starcatcher” — a show that channels Groucho Marx and Gilbert & Sullivan and Monty Python as it traces the backstory of the boy who became Peter Pan — you will turn misty at the end. To be an adult at Broadway in Chicago’s Peter Pan “prequel” is to be pricked with the realization that, for just about everybody in the world except Peter, and maybe Equity actors, one’s youth relentlessly fades. ★★★★

Preview: John Sanders, who portrays the psychopathic Black Stache in the Peter Pan back-story play “Peter and the Starcatcher,” can’t stop talking about the physical demands of the touring show, which comes to the Bank of America Theatre on April 2 under the aegis of Broadway in Chicago.

Preview: Jamaican-born dancer Teneisha Bonner is a seasoned theater veteran, but she admits she had no idea of the world-widening experience awaiting her in the multi-ethnic dance spectacle that is “Heartbeat of Home.” The new extravaganza, from the same team that created “Riverdance,” makes its U.S. debut in Chicago on Tuesday night at the Oriental Theatre for a run through March 16.

Review: It is like properly prepared scrambled eggs, this rebuilt production of “To Master the Art,” the story of how a tall, kitchen-clueless Californian became the famous Julia Child: basic, sumptuous, irresistible. If this lovely play, written by William Brown and Doug Frew, possessed an intimate charm in its original 2010 staging at TimeLine Theatre that cannot be replicated in the Broadway Playhouse’s grander proscenium venue, its essential warmth and honesty remain undiminished. ★★★★

13th in a series of season previews: Even as “The Book of Mormon” nears the end of its Windy City run, Broadway in Chicago is preparing for three more hit musicals — a new UK touring import for the 27-year-old “The Phantom of the Opera,” the 10th anniversary tour of “Wicked” and the first national tour of “Motown the Musical,” the story of Detroit vinyl mogul Berry Gordy, who made famous The Supremes, The Four Tops, Stevie Wonder and The Jackson 5. There’s also a local angle in this season’s lineup of shows. 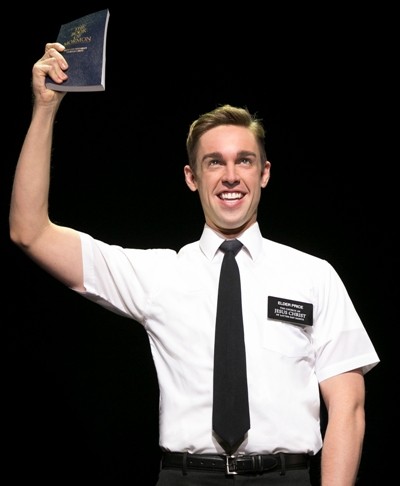 Review: This you can believe: “The Book of Mormon,” Chicago’s sit-down production of the hit Broadway show that is totally outrageous and equally endearing, will end its run at Bank of America Theatre on Oct. 6 so that a national tour with the same cast can commence. Broadway in Chicago is already promising a return, after visits to Denver, San Francisco, Los Angeles and other cities, but not until sometime in the 2014-15 season. ★★★★

As dancing dame on high seas, Rachel York heads up motley tour crew of ‘Anything Goes’

Preview: Rachel York, slyly sinful Reno Sweeney in the Roundabout Theatre production of Cole Porter’s “Anything Goes” headed for Chicago, sees herself in the proud line of those indomitable dames of 1930s Hollywood.

Preview: Norbert Leo Butz plays Edward Bloom, a Herculean story-spinner who supersizes his own legend in the musical “Big Fish.” We caught up with Butz at the Oriental Theatre, where the two-time Tony winner is trying this fabulist father-son story on for size. Butz talks about his role in the Broadway-bound musical, now in Chicago previews. We sneak a listen, too.

Preview: There’s a connection you can’t miss between actor Stephen Anthony, recently graduated from Florida State University, and the con artist Frank Abagnale, Jr., whom he plays in the national touring production of “Catch Me If You Can” that opens April 3 at the Cadillac Palace Theatre. They both bounce around the country, never staying long in one place, pretending to be somebody they aren’t and oozing charm all the way.

Preview: The bus has a name. Priscilla. And the Priscilla that’s coming to Chicago’s Auditorium Theatre is the same ostentatious vehicle with the glittering high heel on top that once revolved on a Broadway stage. “The original creators didn’t think it could be done,” says Scott Willis, who stars as the aging transsexual performing artist Bernadette in “Priscilla Queen of the Desert.” “But when it’s time to shuffle off to Buffalo, they always find a way to do it.” The show plays Chicago’s Auditorium Theatre March 19-30.

Preview: Teal Wicks made a name for herself as the misunderstood but resilient green girl Elphaba in “Wicked.” Shed of the body paint, she’s again playing a young woman who marches to her own drum as Emma, the fiancée (against all prudent counsel) of the mysterious Dr. Jekyll in the musical “Jekyll & Hyde.” Where Wicks is marching with it is right back to Broadway.