Review: “Moscow, Cheryomushki,” by Dmitri Shostakovich, in its professional Chicago premiere. Presented in English by Chicago Opera Theater, at the Harris Theater at Millennium Park through April 25. ****

If you had told me that Dmitri Shostakovich was fresh out of college when he wrote “Moscow, Cheryomushki” — his musical theater piece about young Muscovites in their amusing quests for apartments, careers and romance in the 1950s — I might have believed you.

But Shostakovich was a 52-year-old veteran of the Soviet culture wars when he finished “Moscow, Cheryomushki” in 1958. (Had it been languishing under the bed?) The musical satire is a tribute to his inner kid, a wonderful thumbing of the nose in the tradition of MAD Magazine, The Onion’s satirical news and Terry Gilliam’s film “Brazil.” 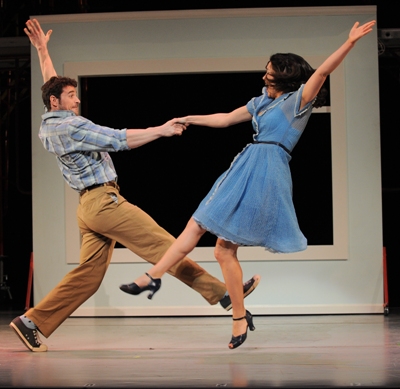 And it’s just right for Chicago Opera Theater, which has opened its 2012 season at the Harris Theater with this saga of three pairs of young lovers and their real estate nemeses, who include a platinum blonde in need of an expanded boudoir and her bloviating bureaucrat of a husband. 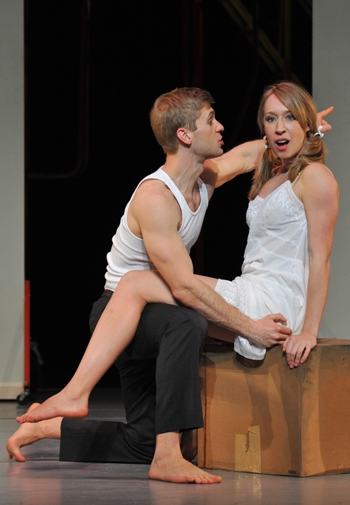 McBurney has arranged quite a bit of Shostakovich in his career as composer, arranger and musicologist, and for this production he fashioned a jaunty, vest-pocket version of the original “Cheryomushki” score for only 14 instruments including guitar and saxophones. It’s a good thing the band was small, because on opening night the entire troupe had to pile onto the back of the stage behind Klepikov’s nifty scaffolds, the orchestra pit having thrown a fit of technical pique.

This opera’s plot’s not much, perhaps best told over a glass of bubbly: Young romantics are eager for their own flats in post World War II Moscow’s Cheryomushki district. They include a newly married couple forced to live apart and thus devoted to the clandestine grope, a charming narcissist determined to find a girl with a flat first and fall in love second, and a timid yet smitten pair still trying to get up the nerve to say hello.

They are all subjected to nasty tactics, greedy landlords and ridiculous bullies, so they sing sentimental lyrics dripping with irony, dream of dancing refrigerators a la Agnes de Mille and resort to a tall construction crane in lieu of a front door key. There’s even a magic garden where crooks have to tell the truth in spite of themselves, but we won’t get into that. 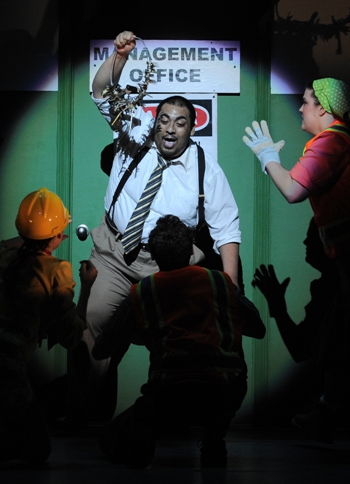 At first I thought I was missing the joke in the style of the English translations by Meg Miroshnik, who lined up her words and Shostakovich’s musical accents such that the Eng-lish’ words had their’ ac-cents’ on the’ wrong syl-la’-bles, if you get my meaning. I adjusted to her curiously bumpy rhythms after a while, the better to take in the considerable humor she conveyed, but it took some doing.

Donahue must have been delighted that his young, fit cast could handle the fleetness and buoyancy he was after. Let no one think just any baritone can handle the cossack kicks that Ryan Center baritone Paul LaRosa pulled off as Boris, the charmer who’s determined to lure the total girl+apartment package. He’s something of the total package himself, with a wonderful touch for physical comedy, a strong and beautiful voice and the dancing skills that one typically encounters on Broadway but not so much in the opera house. 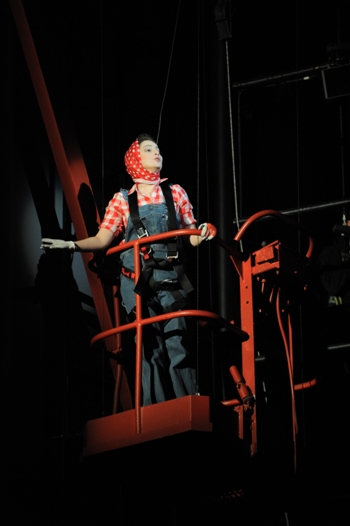 His love interest, the exquisitely voiced soprano Sara Heaton (as Lidochka) is just as charming and nimble of voice and foot. The house erupted in prolonged applause at the end of their extended dancing routine, much of it spent in the air.

Ryan Center mezzo-soprano Emily Fons and baritone Adrian Kramer carried off the extended joke of the sex-starved newlyweds so well that the audience started to laugh whenever it became apparent that the two were about to be left alone for a moment, at which point the genuinely funny groping immediately began. Their voices fit well together, too.

Soprano Sophie Gordeladze as Lusya, the crane operator waiting patiently for her admirer Sergei to say hello, had some of the opera’s most sweetly yearning music, and her voice bloomed beautifully at the top. Tenor Dominic Armstrong, as the shy but big-hearted Sergei, is a cleverly nuanced artist with a silvery voice who won his audience over immediately, belying the timid fellow he played. 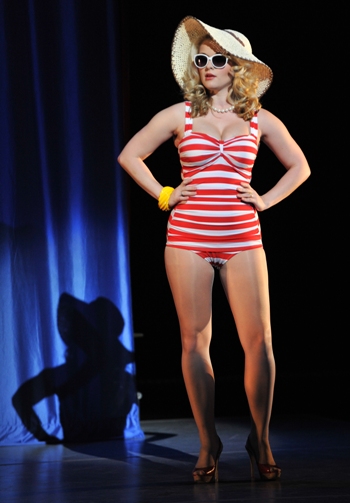 Then there are the bad guys, hilarious villains you know will take a fall, so it’s okay to enjoy them while they’re spewing misery. Bass Matt Boehler is the sneering Drebednyov, whose trophy wife Vava (soprano Ashleigh Semkiw) needs more room for her hats and shoes. (She can’t need more room for her clothes. They’re so skimpy they’d fit in her purse.) Bass-baritone Paul Corona is Barabashkin, the building super, whose patter song about how much everybody loves him until they get their keys is worthy of Figaro. Wonderful singing comedians, all.

The entire cast is a pleasure, and that includes the carefree corps of five dancers and 12 playful choristers who added their frisky talents. The parent generation is represented by baritone Paul Scholten, who was genuinely touching as Semyon, the only soul unhappy to be promised a Cheryomushki flat. His decrepit house has fallen down around him, but he’s gripped with longing for the old neighborhood anyway, and he sings one of those soaring love songs to a place that reminded me of Hoagy Carmichael’s “Georgia on my Mind” and William Bolcom’s “New York Lights.” 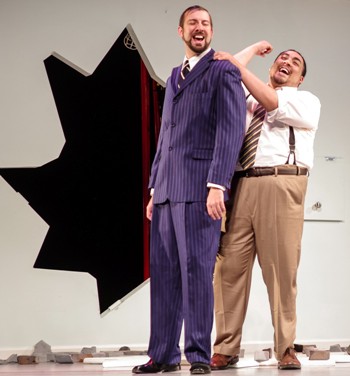 This highly successful production is also a tribute to the superb work of general director Brian Dickie, who departs at the end of this season after 13 years of transforming care that has left COT firmly ensconced as a jewel in the city’s cultural diadem.

Only three performances remain, but the Harris auditorium holds a lot of people. It’s a vibrant enterprise that COT’s incoming general director Andreas Mitisek will take over next season.

Photo captions and credits: Home page and top: In Shostakovich’s “Moscow, Cheryomushki,” Sophie Gordeladze plays Lusya and Dominic Armstrong is her shy lover Sergei. Descending: Paul LaRosa as Boris and Sara Heaton as Lidochka both dance and sing. Sasha (Adrian Kramer) and Masha (Emily Fons) can’t keep their hands off each other. Bass-baritone Paul Corona is Barabashkin, the building super who doesn’t want to give up apartment keys. Lusya (Sarah Heaton) wields a crane to help friends break into their own apartment. Soprano Ashleigh Semkiw is Vava, the trophy wife. Bass Matt Boehler, Vava’s husband Drebednyov, breaks through a wall with the help of Barabashkin. Below: The set and the dancers. (Production photos by Liz Lauren) 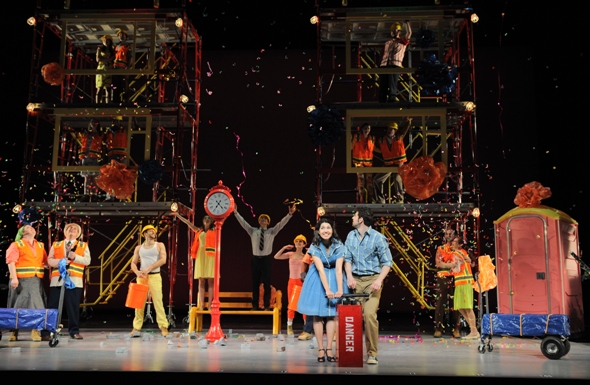