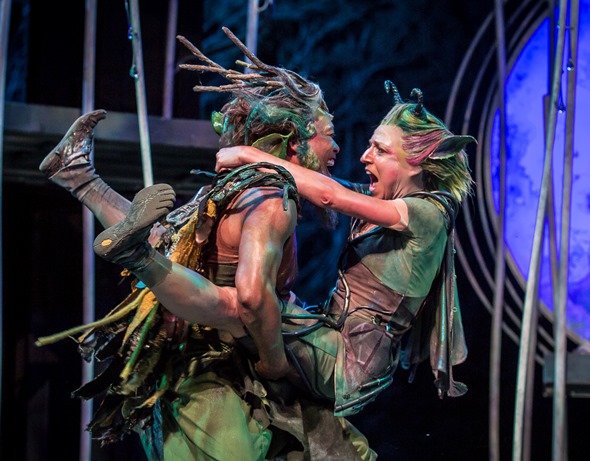 Interview: Surprised by the part, actress sprang into the magic (and rap) as the Bard’s woodland fairy at American Players Theatre.

Cristina Panfilio, the disarmingly sly and funny – and athletic! – Puck in Shakespeare’s “A Midsummer Night’s Dream” at American Players Theatre, didn’t see it coming. The role of the mischievous fairy sprite with magical powers is normally played by a male actor.  When director John Langs phoned her and cold-pitched her the part, she was flattered, of course. She was also overwhelmed by the thought.

“I connect more naturally to Helena,” says Panfilio, referring to one of a quartet of young lovers whose tangled pairings Puck only further confuses in the play’s crazy mash-up of human frailties and fairy machinations. “I know what it’s like to be the girl who’s not the prettiest but is OK with that. I played Helena in a Short Shakespeare production at Chicago Shakespeare Theater. But Puck is iconic. What are you supposed to do with this character? There didn’t seem to be any rules. But once I stepped back and worked through the play and the words – it’s all in the language – it became fun.” 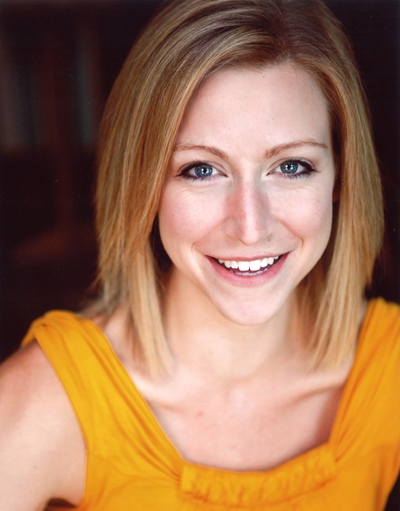 Panfilio’s bounding, self-assured Puck goes directly to the essence of a sprite-operative that might be seen as the predecessor of Prospero’s airy servant Ariel in Shakespeare’s “The Tempest.” Puck is the instrument of the fairy king, Oberon (played by Gavin Lawrence), who’s doubly occupied with interceding in the aforementioned muddle among human lovers and playing some punitive trickery on his own wife, Titania (Colleen Madden), who has defied his authority. On both fronts, Puck is Oberon’s determined enforcer.

“Puck messes with people,” says the Chicago-based actress. “Her language is dark and devious. She talks, a lot, about the stuff she does. There is always some danger and some fun. But she doesn’t mess with Oberon. She loves Oberon and she’s constantly seeking his attention and affection. Oberon calls her ‘my gentle Puck.’

“For me, figuring out Puck came down to mining out that stuff and going back to the basics of acting: What do you want and how are you trying to get it? John left me a great deal of freedom, and I just focused on letting things happen. We ended up with a lot of physicality, but I didn’t just walk in with that. It evolved. I’m a really physical person, a runner and biker.”

Urging and sharpening Puck’s movements were some big drums played by the fairies. 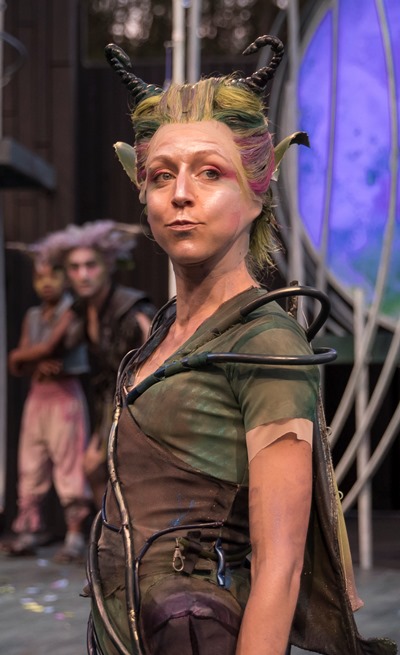 “I’m really affected by sound and music,” says the actress. “My mother brought me up on Motown. There was something about those drums that taught us how we should be moving, and there’s a lot of stuff in the play about fairy dances.”

If the rhythm of language is inextricably bound up in Shakespeare’s plays, one unforgettable scene between Puck and Oberon finds Panfilio pushing that pulse off the Elizabethan chart into – rap. When busy Puck reports to her master on a variety of assignments she has carried out, not all of them with the intended precision, the details tumble into a groove that modulates into a very funny rap that sort of takes possession of Puck – until Oberon sternly indicates enough already.

“The meter in that long passage is almost perfect,” explains Panfilio, “and in an early rehearsal, John (the director) said, ‘I had this idea, don’t know whether it will work, but maybe you could try it.’ Puck is always trying to impress Oberon, so John saw the possibility of breaking into some sort of rap. I’m willing to try anything at least once. It has worked great. There’s absolutely a vibe coming back from the audience. I sense that they’re on board with it. They clap at the end and laugh. No question, they’re getting the language.”

For all the magic in that language, APT’s production derives much of its charm from Panfilio’s, well, physical wit. She is one quick and clever sprite. 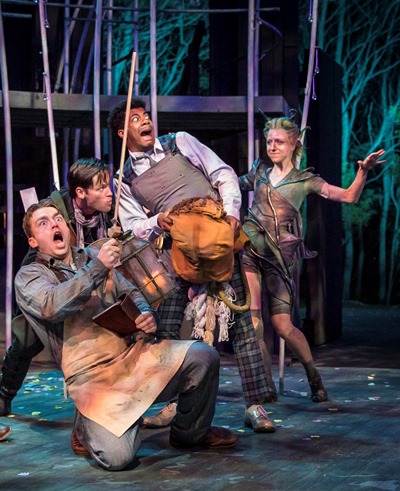 “Puck delights in magic,” she says. “Magic to Puck is like pizza to me. But I think Puck is not one to plan ahead. She lives for right now, for what is the most fun. And John wanted me zooming around all over the place.”

But on APT’s outdoor stage, Puck cannot fly. There’s no means of  lifting this fairy up and away. So the costume shop came up with a delightful alternative: small wings that Panfilio can extend when Puck is about to whisk off – or cause to droop when she’s been scolded.

“It’s such a cool tool,” Panfilio says. “I’ve never had working wings in a play. If you knew how hard people worked on these things! I would make suggestions and they would make changes overnight. The original idea was to make them go up whenever I was about to take off. I asked, ‘Is there any way I can make them go down when I get in trouble?’” The solution leaves no doubt that Puck knows when Oberon is really, really annoyed.

The play’s ultimate magic, says Panfilio, is the love – as true as it is unsmooth for humans and fairies alike – that permeates these wooded antics. 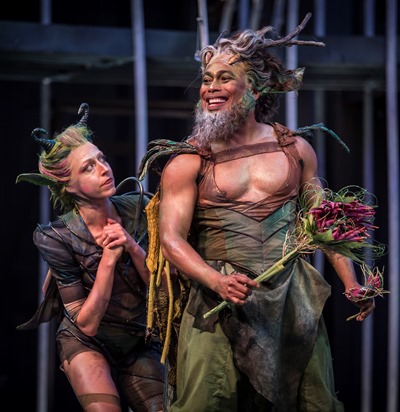 “On the first day of rehearsal, John described his vision of this story as a celebration of love. He wanted it to be joyful and fun, and participatory for the audience. It would be the first play on the new (completely rebuilt) stage, and he wanted it to seem like it popped out of these woods. We have made a big point of engaging the audience. I spend a lot of time talking to them. I need them, and I have learned so much from them – what works, what doesn’t.

“But I also owe a lot to the other actors. Puck has all these cool magic moments, putting people to sleep. But actually, it’s an ensemble rehearsing for countless hours. Nothing works unless everybody hits their mark. I do the move, but the other actor has to buckle his knees at the right moment. It’s all about the ensemble getting it exactly right.”

The role she never dreamed of, in midsummer or any other season, has proved “an incredible gift,” says Panfilio. “I’m so excited and honored to go to work and play Puck every day. It feels so right. I feel at home.”