Preview: The mid-winter is far from bleak under Chicago’s theater marquees. Steppenwolf offers Lucas Hnath’s “A Doll’s House, Part 2,” a sort of what-if sequel to Ibsen’s play. Lookingglass runs out the premiere of Kareem Bandealy’s ‘Act(s) of God,” a cosmic guess-who’s-coming-to-dinner. And Chicago Shakespeare revisits the Bard’s melancholy prince – ever perched on the existential fence between being and nothingness.

Preview: The Chicago theater scene enters its snow-to-blossoms segment with a flurry of highlights that we’ll glimpse in a three-part series of winter-spring previews. In early prospect are Goodman Theatre’s world premiere of Christina Anderson’s “How to Catch Creation,” Ike Holter’s “Red Rex” at Steep and Christina Ham’s “Nina Simone: Four Women” at Northlight.

Fourth in a series of season previews: Fifteen years into its venture of creating high-voltage drama in a really small space, Redtwist Theatre will roll out its first production ever by the Bard of Avon. And what else would you choose for a first leap into Shakespeare on a postage-stamp stage but “King Lear”?

Preview: At the outset of its 38th season, American Players Theatre has the look of a company starting afresh. Its 2017 summer at Spring Green, Wis., about 30 miles west of Madison, opens on a brand-new stage, the centerpiece of an $8 million renovation of both production and public facilities. “Our theater was literally falling down,” says APT artistic director Brenda DeVita. “This renewal has given us, and our audience, a theater that is better is so many ways.”

Review: Chicago Shakespeare Theater’s new production of the Bard’s “Love’s Labor’s Lost” is a joyous voyage of discovery, a comedic delight that strips away the thicket of a problematic play and leaves us with the bare sober truth of human folly. Deftly edited and wittily directed by Marti Maraden, it brings together an acting ensemble so well integrated that the whole rollicking night feels like the work of a practiced improv troupe. ★★★★★

Review: Chicagoland theater buffs have spent a goodly part of the last year reveling in the many and wondrously diverse events of Shakespeare 400 Chicago. This circle of opportunity, revelation and indeed riotous and profound fun – engineered mainly by Chicago Shakespeare Theater and its artistic director, Barbara Gaines — comes to a close Dec. 21 with the final performances of “The Winter’s Tale.” It’s a crackling production by the British company Cheek by Jowl, and one that brings the yearlong observance back to its auspicious starting place. ★★★★

Review: Chicago Shakespeare Theater’s outsized and smartly honed two-part miniseries “Tug of War,” focusing on the endless cycle of royal usurpation and bloodshed in the Bard’s history plays, comes to its conclusion with a sequence that illuminates the brief reign and unsurprising death of horseless Richard III at Bosworth Field. For my part, I shall not ask with the great songstress Peggy Lee, “Is that all there is?” My question is: When will we be able see it again? ★★★★

Review: In a tradition dating back to Shakespeare’s own time, “The Merchant of Venice,” which frames bitter hatred between Christians and Jews in a metropolis of a distant era, has been labeled as comedy. I doubt that anyone who sees the brutally frank Shakespeare’s Globe production now running at Chicago Shakespeare Theater will come away laughing. ★★★★★

Review: What is so striking about the current, altogether marvelous production of “Othello” at Chicago Shakespeare Theater is that the beleaguered Moor is no mere catalyst in the very events of which he is the object, but rather presents himself as a man – a great military general — worthy of his reputation. In the person of James Vincent Meredith’s Othello, and in the care of British director Jonathan Munby, Shakespeare’s play for once does not seem to be first and foremost about Iago. ★★★★★

In Russian troupe’s ‘Measure for Measure,’ virtue and its opposite bear a close kinship

Review: One well might argue that Shakespeare’s “Measure for Measure” is a less than perfect play. But the neatly framed picture of hypocrisy at its core is so clear, indeed so ringingly universal in its human embrace, that it resonates in any culture. Witness the Russian-language production (with English supertitles) that officially popped the cork Jan. 27 on Shakespeare 400 Chicago, a yearlong aggregation of events dramatic and otherwise spearheaded by Chicago Shakespeare Theater. ★★★★

Review: In double magic that beguiles ear and eye with levity and levitation, Chicago Shakespeare Theater has invoked a rare vision of the Bard’s lyrical play of vengeance transcended by forgiveness, “The Tempest.” Co-directed with no slight imagination and great sleight of hand by Adam Posner and the magician Teller (he of Penn and Teller fame), CST’s season opener is pure enchantment – as credibly human and affecting as it is vibrant, fanciful and fresh. ★★★★★

8th in a series of season previews

Review: Were it not for Larry Yando’s crushing turn in the title role, Chicago Shakespeare Theater’s “King Lear” would amount to little more than an ill-advised concept played out by a cast that largely misses both the pulse and the pressure of Shakespeare’s language. Setting aside for the moment this production’s manifold curiosities, at its core reigns the regal figure of Yando, whose portrait of Lear – as imperious fool stripped to his humiliated soul – is an experience not to be missed. ★★★

Fifth in a series of season previews: Chicago Shakespeare Theatre honors its namesake this season with an autumn production of “King Lear,” the fantastic adventures of “Pericles” and a contemporary sequel to “Macbeth” that wryly ponders the chaos that befalls Scotland upon that usurper’s demise. Capping the season will be the world premiere of the musical “Sense and Sensibility,” composer-lyricist Paul Gordon’s adaptation of the Jane Austen novel.

Review: Care as we may for the oft love-struck young swain in Shakespeare’s great tragedy “Romeo and Juliet,” it is Juliet whose desperate predicament holds our hearts in thrall. A successful staging requires, above all else, an irresistible Juliet, radiant indeed as the eastern sun, and American Players Theatre’s affecting summer run boasts just such a blazing star in Melisa Pereyra. ★★★★

Review: To watch a production by Shakespeare’s Globe Theatre on its home turf, an open-air replica of the Bard’s original playhouse, is to sense the Elizabethan theater as a living, breathing – not to mention grunting and sweating – organism. Amid the swarming actors, you’re on top of the action; or make that, in the recent instance of that spectacle of maim and slaughter “Titus Andronicus,” the mayhem. ★★★★

Preview: As if running up a banner announcing its annexation of the New World – where, of course, it is located – the classically oriented American Players Theatre in Spring Green, Wis., opens its 2014 summer with a new commitment to Americana, leading off with no less bracing a representative than David Mamet’s “American Buffalo.”

‘Henry V’ at Chicago Shakespeare: Noble production, except His Majesty is missing

Review: Chicago Shakespeare’s vivacious production of “Henry V” poses something of a paradox: Much of its energy emanates from the youthful presence of Canadian import Harry Judge as the king – and what is least remarkable about this show is Judge’s surface-skimming account of the embattled monarch. ★★★

Review: You never know what pared-down, free-wheeling adaptation of Shakespeare you’re going to get at Chicago Shakespeare Theater. But even for CST, its 1940s setting of “The Merry Wives of Windsor,” complete with a musical track of period pop tunes, takes fast-and-loose into a new dimension. It’s also a complete delight. ★★★★

Report: While the Stratford Festival has shed its branding association with the Bard of Avon, any concerns that the festival might really be loosening its traditional ties with Shakespeare should be allayed by newly announced plans for the summer of 2014. The Bard abounds. The festival’s five Shakespeare productions will include two takes on “A Midsummer Night’s Dream” — a full-scale account and a “chamber” version for just four players directed by one of the world’s most innovative masters of stagecraft, Peter Sellars.

Review: Traditional criticism hasn’t been altogether kind to Shakespeare’s early comedy “The Two Gentlemen of Verona,” which is often portrayed as a workshop effort that set the stage for the Bard’s later, more sophisticated riffs on the madness of love. But this summer’s sharply drawn, energetic and sly production at American Players Theatre makes a savvy, satisfying case for a comedy worth catching. ★★★★ 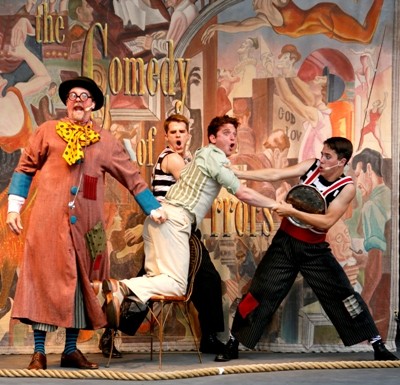 Preview: What could be funnier, or crazier, a more riotous lark than Chicago Shakespeare Theater’s touring production of the Bard’s “Taming of the Shrew” in parks across Chicago last summer? The answer well may be this summer’s CST encore: 26 free performances in 18 parks of Shakespeare’s madcap farce “The Comedy of Errors.”

Preview: What’s in a name? American Players Theatre, which has been filling summers with drama since 1980 in the woods of Spring Green, Wis., doesn’t trade on the Shakespeare brand. But in every aspect of making theater, from staging to vocal delivery to its choice of plays, this ambitious enterprise hews to the Bard as its reference point. In the 2013 mix of eight plays, which opens June 15, APT includes a typical infusion of Shakespeare, a stylistic sweep from “The Two Gentlemen of Verona” and “Hamlet” to “Antony and Cleopatra.”

Interview: Ora Jones, so assured and imposing as Queen Katherine in “Henry VIII” at Chicago Shakespeare Theater, was just as confident she had blown her audition for the part. And that wasn’t such a bad thing, she thought – because Katherine’s great speech in her trial scene, the very audition piece that Jones would come to deliver with authentic majesty, had left the actor essentially mystified.

‘Measure for Measure’ (read: laugh for laugh), Goodman’s screamer would be hard to top

Interview: The actor who portrays Marc Antony in Shakespeare’s “Julius Caesar” draws one of the greatest speeches in the Bard’s canon: the dramatically pivotal funeral oration for the slain Caesar. But that opportunity, says Dion Johnstone, whose eloquent and driven Marc Antony fires the current production at Chicago Shakespeare Theater, comes freighted with compact and perilous challenges. “From the moment Marc Antony enters the Senate and sees Caesar’s bloody corpse, with Brutus and the other assassins all still there, he’s in serious danger,” the actor says. “And despite his overwhelming grief, he has to think fast.”

The New Season: Chicago Shakespeare offers a walk ‘In the Park with George’ and a premiere

15th in a series of season previews: Chicago Shakespeare Theater’s 2012-13 season will extend artistic director Barbara Gaines’ deep exploration of the Bard with “Henry VIII” as associate artistic director Gary Griffin adds a Sondheim encore to last year’s hit production of “Follies.” And Gaines will direct what she calls “the funniest play I ever read” in the Chicago premiere of David Ives’ comedy “The School for Lies,” a romping modern spin on Molière’s “The Misanthrope.”

13th in a series of season previews: Three world premieres punctuate an ambitious slate of nine productions at the Goodman Theatre in the coming season. Two other shows are Chicago premieres. The red-letter lineup begins with Tennessee Williams’ “Sweet Bird of Youth,” following up on last season’s high-profile account of Williams’ “Camino Real.”