‘Ain’t Misbehavin’’ at Porchlight: The joint’s (almost) jumpin’ as singers ease into swing

On opening night, Porchlight Music Theatre’s go at the Fats Waller revue “Ain’t Misbehavin’” gave the impression of two different shows, one ready and one not quite. The good news is that the sharper, more relaxed and spontaneous effort came in the second half, when perhaps nerves had calmed and the company of five singing, hoofing show folks started to look like they were simply having fun. 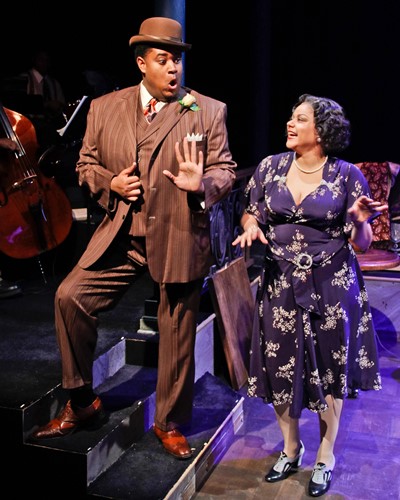 “Ain’t Misbehavin’” – an ironically titled slice of theater if ever there was one – is an irresistible pastiche of deliciously naughty (and even some nice) songs either penned by early jazz great Thomas “Fats” Waller or popular on the entertainment circuit he traveled from the 1920s until his death in 1943 at age 39. Many of the tunes written by or associated with Waller have become part of our cultural DNA, songs like “Honeysuckle Rose,” “Two Sleepy People,” “I’m Gonna Sit Right Down and Write Myself a Letter” – the list is pretty long.

Some 30 numbers, including of course the iconic title tune, form the swinging tapestry of “Ain’t Misbehavin’.” Fashioned by Murray Horwitz and Richard Maltby, Jr., to capture the spirit of the hip club scene of the Harlem Renaissance, the show opened on Broadway in 1978, winning the Tony Award for Best Musical. It has been perennially revived by regional companies ever since. 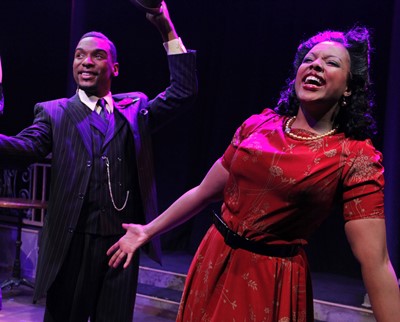 Not that it’s a breeze to do. “Ain’t Misbehavin’” demands five smart singers who can not so much dance as move with style. It needs a hot little jazz band, too, with a piano player out front who can make the whole thing jump. All of this, Porchlight offers in an energetic production directed and choreographed by Brenda Didier with musical direction by Jaret Landon. The show also looks great in Jeffrey D. Kmiec’s saloon set and Bill Morey’s flashy costumes.

But for nearly half the debut performance, the five charming personalities on stage — Robin Da Silva, Sharriese Hamilton, Donterrio Johnson, Lorenzo Rush, Jr., and Lina Wass –– created little more than a sense of doing it like they did it in rehearsal, grooving by rote rather than by instinct. I got the sense, in numbers like “Lookin’ Good But Feelin’ Bad,” “Squeeze Me” and “Cash for Your Trash,” that these very appealing performers were just trying too hard to be swingers worthy of their sexy songs. 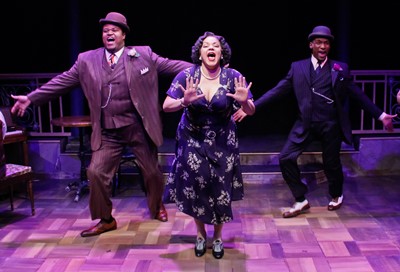 Post-intermission, however, the ensemble started to cook with soul-shaking tunes like and “I Can’t Give You Anything But Love,” “I’m Gonna Sit Right Down and Write Myself a Letter” and “Your Feet’s Too Big.” Robin Da Silva kept the laughs coming with a comic jealously shtick, and Sharriese Hamilton surely held everyone’s heart in her hand as the slightly imperfect ingénue.

Lina Wass set the second-half tone with her high-styled “Spreadin’ Rhythm Around,” and Donterrio Johnson delivered a show-stopper with his poison-tipped “Viper’s Drag.” Lorenzo Rush, Jr., a bearish figure with a dangerous grin — who also looked a lot like the illuminated image of Fats Waller on the back wall — anchored the vocal quintet in more ways than one. And piano man Austin Cook charged the stride piano licks with a get-up-and-dance pulse. But the night’s crown jewel was the muted, almost mystical turn through “Black and Blue,” that cosmic questioning of why it should be painful to be black, by all five singers.

Porchlight’s slow-starting troupe appears to be out of the gate, off and swinging. Be sure of this at least: You won’t find one character on that stage that ain’t misbehavin’. 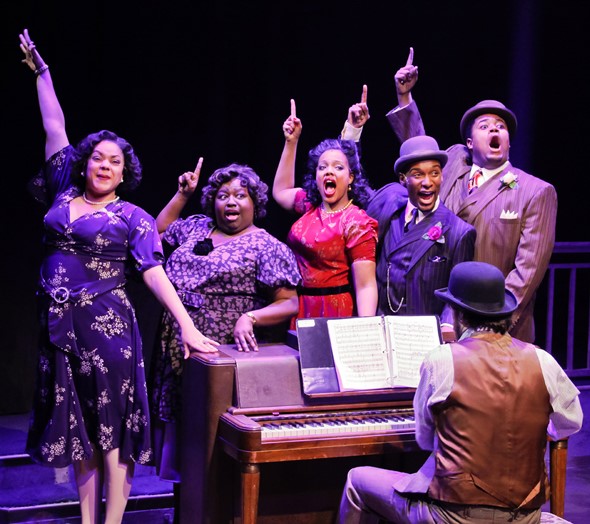