Report: The Liberty Times Taipei headline says “The great Chicago Symphony Orchestra breaks its normal rule and tours with two soloists; Taiwan’s music lovers gain the most.”  The optimism is a welcome development for CSO leaders who raced against time to forge a solution when illness forced music director Riccardo Muti to pull out of the orchestra’s imminent Asia tour.

TAIPEI, TAIWAN — The Chicago Symphony Orchestra’s Asia tour is underway in Taiwan, after a 20-hour flight and ground trip to Taipei via Seoul that went as planned when almost nothing else did.  The musicians are now resting  at their hotel in the heart of the cultural district, prior to their first tour concert Jan. 25th at Chiang Kai-shek National Concert Hall. 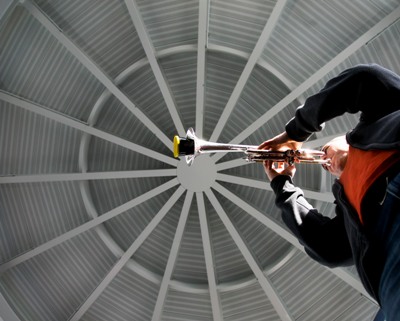 There is no rest for the orchestra’s planners, however. It has been a wild ride since CSO music director Riccardo Muti was suddenly forced to cancel his tour dates with the orchestra just days before departure because of needed surgery.

The already formidable task of bringing off a big tour was abruptly complicated by emergency talent searches, program changes, rehearsal requirements and tight travel schedules on a very short calendar.  And in the upheaval that ensued, it was necessary to add late night and early morning vigils to keep information flowing among those affected around the globe — concert presenters, artists and managers stretching from London (6 hours ahead of Chicago) to Moscow (+10), China (+14) and Seoul (+15).

Here’s how the challenges piled up:

Jan. 7 (Monday):  CSO music director Riccardo Muti, 71, arrives in Chicago from Rome, ill with flu, on the eve of his first rehearsal for pre-tour concerts Jan. 9-15. He withdraws and heads back to Italy to recover. CSO announces Edo de Waart will conduct the Jan. 9-15 concerts, with no program changes. One of the works is Beethoven’s Symphony No. 3 (“Eroica”), which will anchor one of two programs on the CSO’s upcoming Asia tour.

Jan. 9 (Wednesday): Muti withdraws from the rest of his planned Chicago residency, which included the second set of pre-tour concerts. De Waart also takes on this round, Jan. 17-19. Program is changed to include Mozart’s “Jupiter” Symphony instead of two works that had been scheduled for the tour — Stravinsky’s excerpts from “The Fairy’s Kiss” and Busoni’s Suite from “Turandot.”

Jan. 10 (Thursday): CSO postpones its 2013-14 season announcement, which Muti had planned to attend.

Jan. 15 (Tuesday): From Italy, Muti informs CSO president Deborah F. Rutter of impending hernia surgery, and bows out of the tour. Urgent search begins with extremely narrow window of six days for finding headliner replacements that will meet the needs of the CSO as well as demands of the various presenters, who have paid a premium price and perceive box office risk.  But many prominent conductors are already booked on their own tours or — as with de Waart, who is music director of the Milwaukee Symphony — for concerts with their own orchestras. Those involved in brain-storming with Rutter and her artistic team include London-based tour agency Askanas Holt, the various Asian presenters and CSO creative consultant Yo-Yo Ma.

Jan. 17 (Thursday): Muti’s urgent surgery for an abdominal hernia is publicly announced. Eminent conductor Lorin Maazel, 82, is named as leader of concerts for the tour’s second week — Hong Kong, China and Korea. Maazel’s travel plans will be harrowing because of the time difference — a red-eye flight to Hong Kong after a Saturday night New York Philharmonic concert Jan. 26, to arrive in Hong Kong Monday morning just prior to rehearsal. The “Jupiter” Symphony, recently performed, is retained as a program replacement for the scheduled Stravinsky and Busoni works, which were never rehearsed in Chicago.  However, the CSO still has no conductor for its Taiwan concerts, which open the tour.

Friday, Jan. 18 (Friday): Li-Kuo Chang, CSO’s assistant principal viola, a native of Shanghai and a born raconteur, is flown to Taiwan early to be on hand Sunday as the presenter, The Management of New Arts,  announces concert changes to the Taiwan media. Chang was a child during the Cultural Revolution and is the first mainland China native to become a member of the CSO.

Jan. 19 (Saturday): CSO announces Finnish conductor Osmo Vänskä for the Taipei concerts Jan. 25-26. Vänskä was available because of a prolonged labor dispute at the Minnesota Orchestra. (Known to the CSO, Vänskä had also subbed for Bernard Haitink in October 2012, when he conducted Brahms Symphony No. 1 to favorable reviews.) Vänskä is in the process of recording his second Sibelius cycle and has recorded a complete Beethoven cycle with the Minnesota Orchestra.

To spice the mix, the CSO also announces Russian violinist Maxim Vengerov, a charismatic virtuoso who only recently returned to the stage after a four-year sabbatical, to play the Tchaikovsky Concerto Jan. 26. Vengerov has a commitment in Moscow two nights before, to perform at a gala concert for violist Yuri Bashmet, who is a good friend, on the occasion of  Bashmet’s 60th birthday. He’ll arrive the day of the concert, and rehearse the same morning, leaving immediately after the concert. 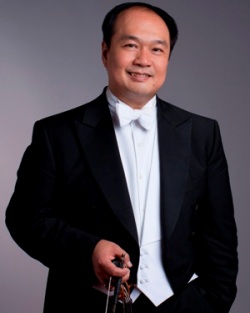 The CSO also taps its concertmaster, Robert Chen, to perform the Mendelssohn Violin Concerto on Jan. 25. Hand-picked for the top CSO spot in 1999 by former music director Daniel Barenboim, Chen is a Taiwan native son and source of considerable national pride.

Jan. 20 (Sunday): In Taiwan, CSO’s Li-Kuo Chang regales the media with stories about Chen as the new artist and repertoirte plans for both Taiwan concerts are laid out in detail.

Back in Chicago, the last of the musicians’ trunks and bulky equipment such as percussion gear and music scores are loaded into semis at Symphony Center. They will be delivered to the airport, repackaged in containers, and shipped via air cargo.

Jan. 21 (Monday):  The big headline across the Arts and Culture section of Taipei’s Liberty Times reads (in Chinese) “The great Chicago Symphony Orchestra breaks its normal rule and tours with two soloists; Taiwan’s music lovers gain the most.” 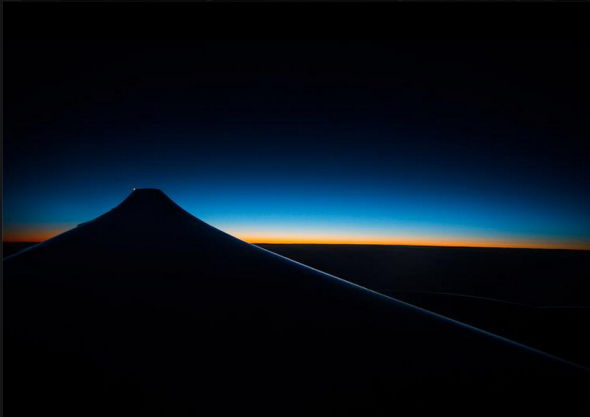 In Milan, Riccardo Muti is reported resting after successful surgery. And in Chicago, CSO musicians depart for Taiwan via Seoul. 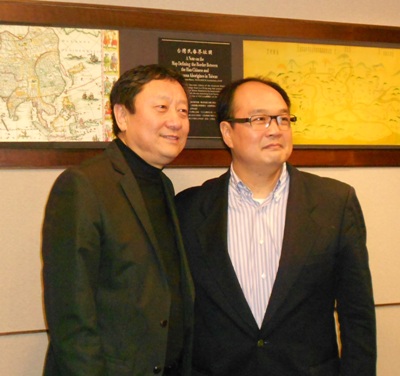 Jan. 23 (Wednesday): Robert Chen, Li-Kuo Chang and The Management of New Arts chairman Niu Hsiao-Hua meet the press and answer, to general merriment,  a wide range of questions about what a concertmaster does, the significant increase of Asian-born musicians in major orchestras, and the secret of “the Chicago Symphony Sound.” Chang, who is older than Chen, talks of the orchestra’s exhaustive three-year search for a new concertmaster and the relief they all felt when Chen emerged.

Jan. 24 (Thursday):  Vänskä, Rutter and the CSO’s principal percussionist, Cynthia Yeh, speak at the final Taipei press conference. In addition to the CSO’s global sponsor, Bank of America, local concert backing comes from Lexus and Chinatrust, whose reps are on hand. Television coverage is extensive, but it’s clear the fraught saga of this trip is already widely known. Rutter begins her remarks by saying, “Maestro Muti told me two weeks ago ‘I will be there on the tour,'” and draws sympathetic laughter.

Vänskä drolly remarks that when he got the offer to conduct the CSO in Taipei, “I had to think about it for 45 seconds before I said yes.”  And Yeh — who is yet another CSO musician born in Taipei — tells the crowd she is glad to be back so her grandparents can see her at work. “They used to say, ‘Cynthia, you play a drum?'”

Still, Vengerov isn’t in Taipei yet. Like Maazel, he will be cutting it close.

Captions and credits:  Home page and top: The CSO’s adjusted programs in Taiwan were praised in news headlines.  Descending: Principal trumpet Chris Martin tries out the acoustics at O’Hare airport prior to departure on the CSO’s Asia tour. Riccardo Muti was downed by the flu, then a hernia requiring surgery. Edo de Waart subbed for Muti in the two weeks prior to the Asia tour. CSO creative consultant Yo-Yo Ma was on hand in Chicago to help brainstorm artist and repertoire solutions for the tour. Lorin Maazel will sub for Muti in Hong Kong, China and Korea. CSO associate violist Li-Kuo Chang, a Shanghai native, is a charming story-teller and a natural ambassador for the orchestra. Finnish conductor Osmo Vänskä will sub for Muti in Taipei. (Photo by Greg Helgeson) Violinist Maxim Vengerov will play the Tchaikovsky Concerto in one concert in Taipei.  (Photo by Naim Chidiac) CSO concertmaster Robert Chen will perform the Mendelssohn Violin Concerto in Taipei. The distant sunrise from the plane ride to Seoul. Li-Kuo Chang  and Robert Chen answer questions from Taipei reporters about life in the  Chicago Symphony Orchestra. Below: Chicago Symphony trombonist Michael Mulcahy packs up one of this instruments. Chicago Symphony associate concertmaster Stephanie Jeoung cavorts on a Taipei garden path. Beethoven’s “Eroica” and Mozart’s “Jupiter” Symphonies await. (CSO Asia tour and CSO musician photos by Todd Rosenberg. ) 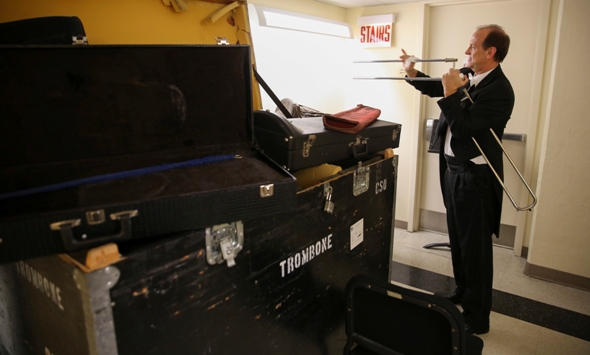 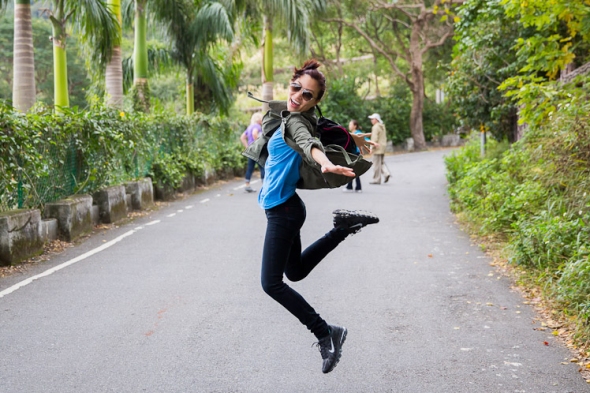 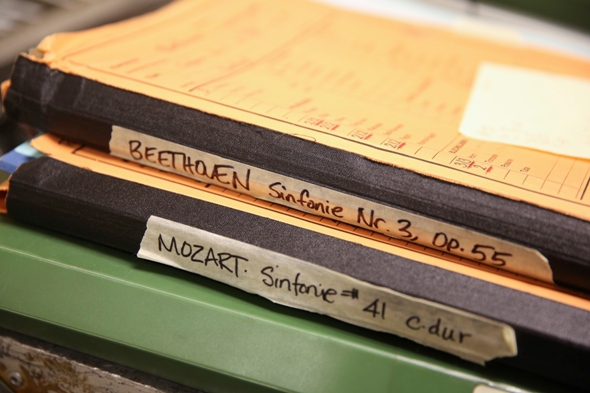