In Russian troupe’s ‘Measure for Measure,’ virtue and its opposite bear a close kinship 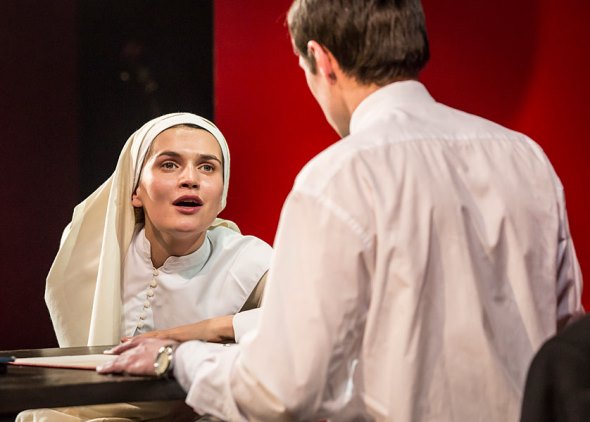 Review: Shakespeare’s “Measure for Measure” produced by Pushkin Theatre and Cheek by Jowl at Chicago Shakespeare Theater through Jan. 31. ★★★★

One well might argue that Shakespeare’s “Measure for Measure” is a less than perfect play. But the neatly framed picture of hypocrisy at its core is so clear, indeed so ringingly universal in its human embrace, that it resonates in any culture.

Witness the Russian-language production (with English supertitles) that officially popped the cork Jan. 27 on Shakespeare 400 Chicago, a yearlong aggregation of events dramatic and otherwise spearheaded by Chicago Shakespeare Theater, which housed this gritty “Measure for Measure” co-created by Moscow’s Pushkin Theatre and the British company Cheek by Jowl. 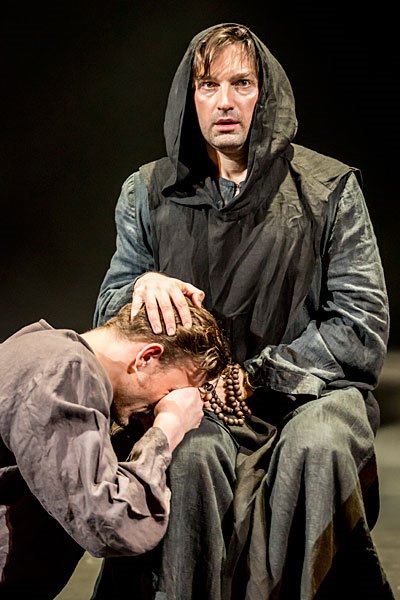 In broad outline, “Measure for “Measure” is a fairly straightforward morality play. A troubled Duke, concerned that his city is sliding into corruption and depravity, decides to cloak himself as a friar and take the temperature of his domain firsthand. He leaves all power to his vice-lord, the ethically impeccable Angelo.

But when the beautiful young novitiate Isabella comes to Angelo ardently seeking pardon for her brother, who has been condemned to death for fornication (specifically, getting his girlfriend pregnant), lust stirs in the pro tem ruler. He offers Isabella a deal: her brother’s life for her favors. She rejects him flatly, and thereby hangs the tale.

There’s something of a Brecht-Beckett existential aura about this modern-dress show directed by Declan Donnellan, co-artistic director of Cheek by Jowl. In an extended opening mime sequence, the Duke (Alexander Arsentyev) is hounded by a pack of citizens – pretty much the full cast, which keeps regrouping throughout the play, rarely leaving the stage. We’re looking inside the Duke’s head; his retreat into that friar’s robe is as much to recover his own sanity as it is to evaluate the community.

Essentially, “Measure for Measure” is a clash of wills between Angelo (Andrei Kuzichev), who has all the power, and Isabella (Anna Khalilulina), who has what he covets. The Duke, in his friar’s guise, becomes a shadowy observer and limited intercessor. (He can’t simply reveal himself.) He wants to save Isabella’s virtue, and his schemes to protect her doomed brother are predicated on ensuring the girl’s welfare. 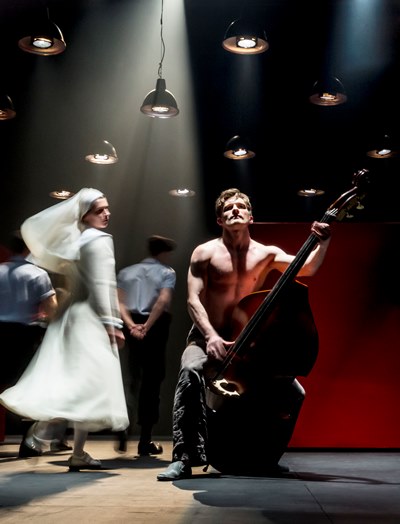 The three Russian principals execute this pas de trois with equal parts of passion and plausibility. As Angelo’s lust for Isabella increases, her ferocity rises to match it. Kuzichev shows us a cool (read: repressed) bureaucrat who dots every i and crosses every t exactly by the book. It is the law, not he, who now condemns Isabella’s poor brother. There is nothing Angelo can do. His hands are tied, and that’s the end of it – until that first sexual synapse, and then the game changes quickly. It’s a transformation that Kuzichev plays to perfection: the automaton becomes not just human, but darkly human.

Yet one might ask: Is Isabella made of any better stuff, really? Khalilulina, in a performance of almost hysterical intensity, embodies a young woman so repulsed by Angelo’s proposition – and so terrified by it – that she can say to her brother’s face that it is nobler for him to die than to live at the price of her chastity. And Khalilulina delivers that pronouncement with the certitude — the rapture — of Joan of Arc communing with God. 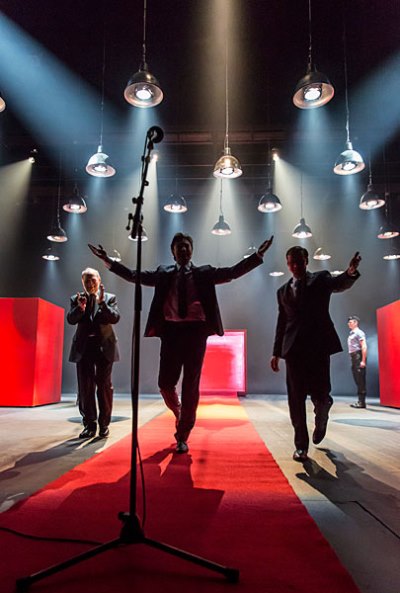 It’s a central issue of human values that Shakespeare enfolds within “Measure for Measure,” and it is at once poignant and (initially) funny to hear the condemned brother, Claudio (Petr Rykov), respond with a somewhat different perspective. He is this close to being spared, and his sister blithely wishes him well on his journey to the next world. Though he first concurs that Isabella’s virtue trumps his own life, Claudio comes quickly around to disbelief and horror.

As hovering angel over all this is the Duke-as-friar, whom Arsentyev plays with a dryly comic mix of anxiety, exasperation and cunning – a figure of some relief in the rough-and-tumble story. But in the end, no matter how you play it, “Measure for Measure” never quite feels resolved. In the complicated working-out that attends the Duke’s return to his duties, more knots are created than undone. It’s surely safe to say that in this starkly staged, modernist setting, no one walks away happy. Maybe that’s life, and not only in Russia.

A word about the surtitles: The commendable choice was made to display Shakespeare’s text in parallel with the spoken Russian, rather than using a vernacular English translation. But the arcana of Shakespeare’s language is inescapable, which means the scanning eye (and brain) can sometimes fall behind the stage action. Still, savoring the Bard’s own turns of phrase does afford anglophones not just a Shakespeare play, but something closer to a complete Shakespeare experience.