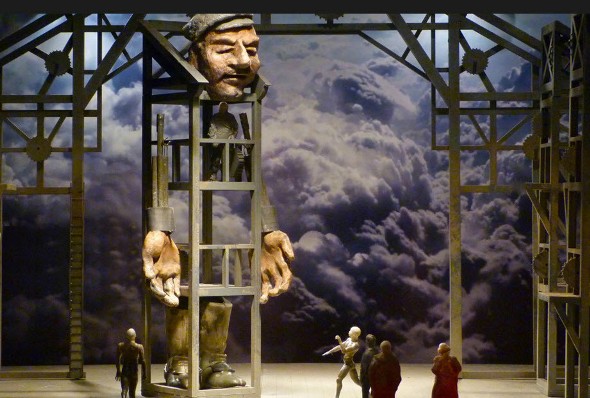 Season Preview: At Lyric Opera of Chicago in 2016-17, heroines include Carmen, Cassandra, Lucia, Norma, Dido, Pamina, Dulcinée and Cockney spitfire Eliza.
By Nancy Malitz
Not many people can put a ten-year life plan on a single piece of paper. But Anthony Freud, general director of the Lyric Opera of Chicago, has got his drill down when it comes to the properly balanced life of a grand opera company. Merrily goaded on Jan. 14 by music director Andrew Davis, who was clearly amused, Freud pulled from his pocket, in a tantalizingly brief “reveal,” a carefully folded, well-worn document crammed with the titles of dozens of operas on a grid.

As Freud and Davis announced essence and detail of the Lyric’s 2016-17 season — which opens with the first installment of Wagner’s four-opera “Ring” cycle and will include Berlioz’ sprawling Trojan War masterpiece “Les Troyens,” giant horse and all — Freud explained that with only eight shows a season, he found it useful to think in terms of hitting all the essentials in a “rolling decade.”

How else, one might reasonably ask, is one to embrace all the old reliables and still make room for the rare historical jewels, the really big projects, the international novelties and the next generation’s entrepreneurial cutting edge? It all belongs in an opera company’s grand scheme, yet it has to be accomplished without alarming the regulars, aging the audience or breaking the bank.

Lyric’s calibrated line-up for 2016-17 thus includes the sultry blockbuster “Carmen” in addition to some intriguing surprises. No Verdi or Puccini next season — Davis pledged that both would return in 2017-18 — but there are two favorites from the bel canto tradition: Donizetti’s “Lucia di Lammermoor” and Bellini’s “Norma.” Here are the highlights: 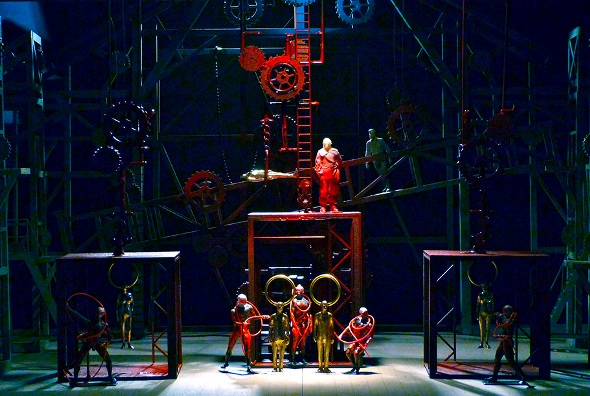 Wagner’s “Das Rheingold,” part one of the “Ring,” opens Oct. 1.  For only the third time in Lyric’s history will the company embark upon a new “Ring,” Wagner’s massive German work based on a Norse saga. Trouble starts when the bitter gnome Alberich is teased once too often by three nymphs who guard their gold in the depths of the Rhine River. Alberich steals the gold; getting it back will involve four operas and a raft of heavenly, worldly and under-worldly characters ruled by the great god Wotan – bass-baritone Eric Owens in his role debut. 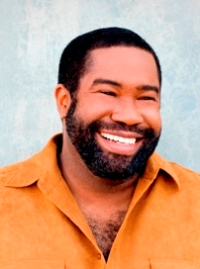 In part one, Wotan is distracted by a costly castle he’s building across a rainbow bridge to the heavens. He will soon find himself tempted by Alberich’s stolen gold, especially since a couple of giants (one is pictured above) are demanding controversial payment for their work on the castle; they want the sister of Wotan’s wife as a prize, and Wotan’s wife is understandably furious. Gold, even stolen gold, suddenly seems the better way to pay.

Parts two and three of this saga — “Die Walküre” and “Siegfried” — will debut in the 2017-18 and 2018-19 seasons. And then in April 2020, the “Ring” comes complete with the final chapter — “Götterdämmerung” (Twilight of the Gods). For this reason, director David Pountney and stage designer Johan Engels conceived all four operas as parts of a whole, and it came as a shock to the Lyric when Engels died at year’s end in 2014.

“Johan had literally packed the models for all four operas in preparation for a presentation in Chicago,” said Freud, describing Engels’ work as well-advanced even then. “He had reached an important punctuation point in the process.” Another designer with whom Pountney often works – Robert Innes Hopkins – was brought in to complete the project. “His brief was not to start again,” said Freud, “but to take what we had as a starting point and further develop it as a creative artist in his own right.” 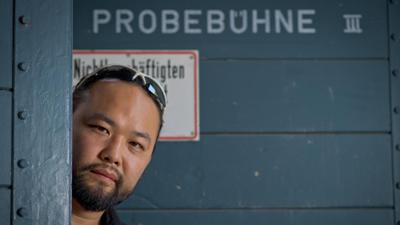 Among key roles now cast is bass-baritone Samuel Youn as Wotan’s nemesis Alberich in his Lyric debut. Youn has several other villains under his belt, including Othello’s conniving subordinate Iago in Cologne, Tosca’s vicious tormentor Scarpia at London’s Covent Garden and Faust’s evil harvester of souls, Méphistophélès, in Berlin. Wotan’s wife Fricka will be sung by mezzo-soprano Tanja Ariane Baumgartner, also new to the Lyric. Freud said he heard her sing the Countess Geschwitz in Berg’s “Lulu” in Salzburg in 2010 and was impressed. Andrew Davis conducts. The “Ring” cycle is a co-production with Teatro Real in Madrid. For more details, click here.

Donizetti’s “Lucia di Lammermoor” opens Oct. 15. Often called a Scottish “Romeo and Juliet,” and justly famous for the heroine’s mad scene, the opera based on Sir Walter Scott’s historical novel “The Bride of Lammermoor” will star Russian soprano Albina Shagimuratova as the young woman in love, and betrayed by those she trusts. 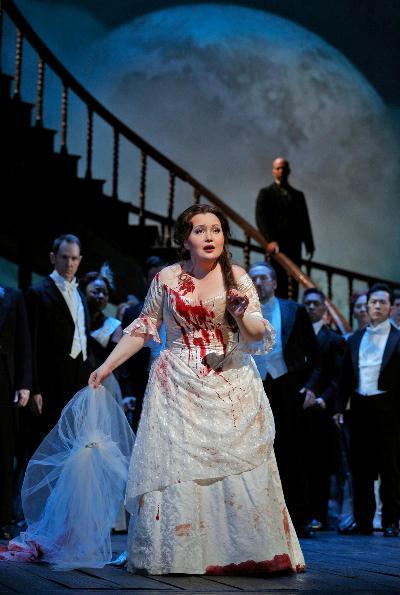 Shagimuratova has sung at the Lyric once before, as one of the betrayed Gildas in a double-cast “Rigoletto” in 2013. Freud described her as a star on the rise.

Indeed, Shagimuratova has sung Lucia already at the Metropolitan Opera and will return there in April to sing Konstanze in Mozart’s “Abduction from the Seraglio,” conducted by James Levine.

Enrique Mazzola will conduct the new-to-Chicago production, by Graham Vick, which is owned by theaters in Florence and Geneva. For more details, click here.

Berlioz’s “Les Troyens” opens Nov. 13. Wryly describing the Trojan epic as “the greatest opera the Lyric has never performed,” Davis said he was keen to offer this two-part mega-opera within the sweep of a total immersion evening. The story begins with the siege and sack of Troy, and then follows Aeneas and his surviving Trojan warriors as they regroup at Carthage. Aeneas loves and leaves the Carthaginian Queen Dido, who kills herself on a funeral pyre. 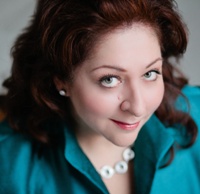 Cassandra, to be sung by the dramatic soprano Christine Goerke, predicts all this, of course, but no one believes her. Mezzo-soprano Sophie Koch is the bereft Dido, and tenor Brandon Jovanovich will undertake the role of Aeneas. Freud said the brand-new concept of director Tim Albery and designer Tobias Hoheisel will contrast the “intense and jagged world of Troy with the grand serenity of Carthage” and that the production will be enormous. “It’s a major event for us,” Freud said, allowing that even a modern opera company must fall somewhat short of Berlioz’s grandiose notions. Among the composer’s instructions, Freud’s personal favorite comes in the Royal Hunt and Storm scene: “Lightning strikes an oak tree, which bursts into flames.” Davis, who will conduct “Les Troyens” for the first time, says he’s been dreaming about the chance “for more than 40 years.” For more details, click here.

Massenet’s “Don Quichotte” opens Nov. 19.  Most people will know the story of Don Quixote, the old knight who tilts at windmills, but only Lyric old-timers are likely to be familiar with the company’s historical connection. 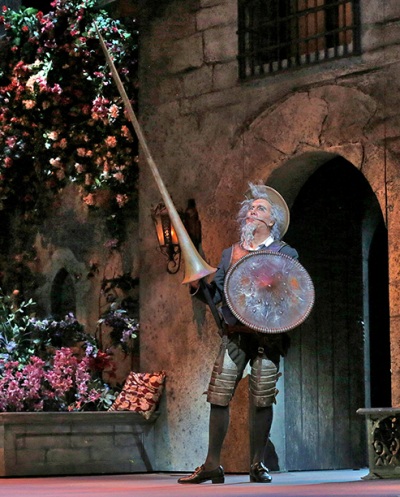 Jules Massenet wrote it for the great Russian bass Feodor Chaliapin, who took it to Monte Carlo, Brussels, Marseille and Paris in 1910. Vanni Marcoux sang it in Chicago a couple of times in the early 20th century, with Mary Garden as his unlikely sweetheart, Dulcinée. Nicolai Ghiarov sang it here in the ‘70s and ‘80s, Samuel Ramey in 1993.

When Freud learned that the Italian bass Ferruccio Furlanetto had taken up the role — “he said it is his very favorite” — the Lyric decided to revive it. Davis will conduct, and the production, new to Chicago, comes by way of the San Diego Opera. French mezzo-soprano Clémentine Margaine will make her Lyric debut as Dulcinée; Italian baritone Nicola Alaimo will make his Lyric debut as Sancho Panza. For more details, click here.

Mozart’s “The Magic Flute” opens Dec. 10. Not even August Everding’s “Magic Flute,” a Lyric Opera classic, could last forever. After three decades, it was time for a fresh production of Mozart’s delightful romance. 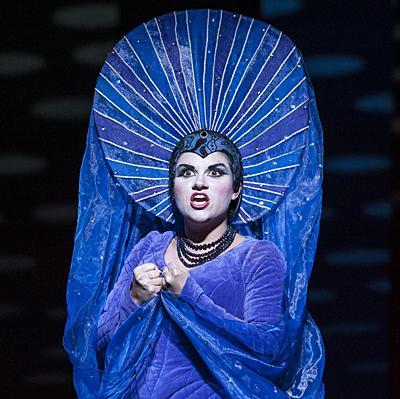 Freud said he called the Australian director Neil Armfield to see if he was game to take on the beloved work. Armfield was just finishing up his own massive “Ring” cycle, and Freud correctly suspected he would be ready for something completely different. “There was a pause at the other end of the phone,” said Freud, “and then he told me, ‘There’s nothing I would want to do more.'”

Freud wouldn’t talk about the production concept other than to say it would be conceived “as a fairy tale.” Tenors Matthew Polenzani and Andrew Staples will share the role of young prince Tamino, with soprano Christiane Karg as Pamina and the up-and-coming coloratura soprano Kathryn Lewek as Queen of the Night. Rory Macdonald conducts. For more details, click here.

Bellini’s “Norma” opens Jan. 28, 2017. The mid-19th-century bel canto tragedy, about a Druid high priestess whose lover betrays her, was favored by the soprano Maria Callas in the mid-20th century. She almost single-handedly made the opera popular again, along with its signature aria “Casta diva,” and the role was later championed by Joan Sutherland and Montserrat Caballe. “You do ‘Lucia’ when you have a Lucia, and you do ‘Norma’ when you have a Norma,” said Davis. “Our last Norma was June Anderson, 21 years ago. We’re thrilled that the opera is returning. It’s really the pinnacle of bel canto.”

The role is well suited to Sondra Radvanovsky (pictured below), who has sung it very successfully at the Met and elsewhere. She will be joined by mezzo-soprano Elizabeth DeShong, an alumna of the Lyric’s Ryan Center training program, as Adalgisa, and tenor Russell Thomas as Pollione in his Lyric debut. The opera is a co-production with companies in Toronto, San Francisco and Barcelona. Riccardo Frizza conducts. For more details, click here.

Bizet’s “Carmen” opens Feb. 11, 2017. Director Rob Ashford, who created new productions of both “Carousel” and “Barber of Seville” at the Lyric, will bring his “Carmen” to Chicago after premiering it in Houston several years ago. 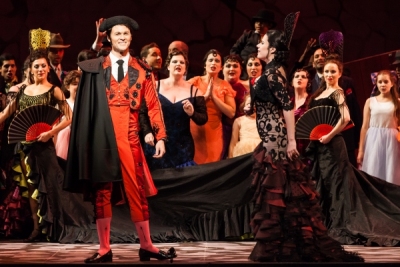 To add freshness to a project as frequently done as “Carmen,” Freud said he liked the idea of handing it to a director not steeped in the opera, adding that Ashford’s background as a choreographer would lend relevance and value. Freud also invited early music specialist Harry Bicket to consider “breaking out of the Baroque box” to conduct one of the casts, and that Bicket agreed. Two very different mezzo-sopranos will play the femme fatale — the Russian Ekaterina Gubanova, for whom the role is new, and the Georgian Anita Rachvelishvili, who has done it in London, Milan, New York, Berlin, Verona and elsewhere. They will be paired with tenors Joseph Calleja and Brandon Jovanovich, who share the role of the haplessly besotted corporal Don José. Ainars Rubikis also conducts. For more details, click here.

Ana María Martínez will be singing her first Tatiana ever in Chicago. She’ll star with Mariusz Kwiecién, a veteran of the title role. Russian bass Dmitry Belosselskiy will sing Prince Gremin, and opera fans will get an early sense of him this season when he also sings the virtuoso bass role of Zaccaria in Verdi’s forthcoming “Nabucco” starting Jan. 23. The Argentinian Alejo Pérez conducts. For more details, click here.

The musical “My Fair Lady” replaces previously announced “South Pacific” to open April 28. The Robert Carsen production, about a gentlemen’s bet to transform a Cockney flower-seller into a lady, was designed for the Théâtre du Châtelet in Paris.

Freud said the change in the musicals came in part because a Lyric audience survey revealed that recent Chicago-area productions of “South Pacifc” had taken the edge off the public’s immediate appetite for the show. Conductor and cast for “My Fair Lady,” which stars Eliza Doolittle as the Cockney spitfire and Professor Henry Higgins as her stuffy tutor, will be announced at a later date.

The Lyric’s now-established tradition of spring musicals on a grand scale will continue, according to Freud. “There are a limited number of musicals that are appropriate for presenting in an opera house of 3,000 seats,” he said. “But there are some. We have to choose carefully.”

This season’s musical, “The King and I,” starts April 29. For more details, click here. 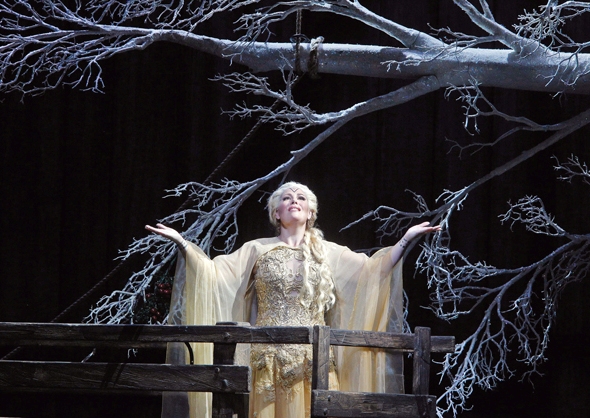