In season of grandeur and magic, Lyric Opera scores with simple charm of ‘Don Quichotte’ 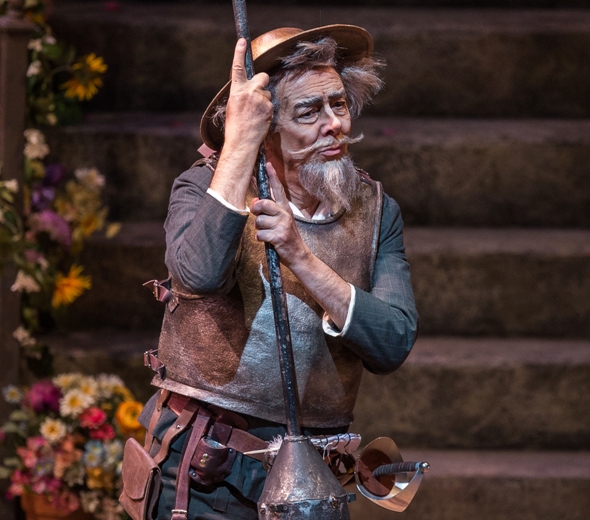 Review: “Don Quichotte” by Jules Massenet, at Lyric Opera of Chicago through Dec. 7. ★★★★

Ambitious out of the gate, the 2016-17 Lyric Opera of Chicago season gave us Part I of Wagner’s “Ring” cycle, the sprawling tetralogy about a power struggle among the gods, with Rhinemaidens, giants and a dragon. In December the company will offer Mozart’s “The Magic Flute,” his storybook singspiel about a royal kidnapping, with trials of fire and water, a feathered bird-catcher and another dragon.

In between we have seen high-flying coloratura (“Lucia di Lammermoor”) and a new high-tech stage toy in Berlioz’ “Les Troyens,” the Lyric’s first use ever of an enormous turntable that allows entire sets to revolve.

Time for some simple old-school tradition? Whyever not? The Lyric’s presentation of Massenet’s “Don Quichotte” is pure operatic comfort food, the charming tale of an antiquated gentleman who, preferring fantasy over the real world, decides to ride forth as a knight errant, restoring chivalry and justice and romance where he sees fit.

The story unfolds amid simple yet lovely sets from the San Diego Opera, in which the projections of windmills inspired one’s suspension of disbelief, and the stonewall archway of a Spanish town proved sufficient backdrop for a bustling and colorful populace. Designed by Ralph Funicello — who has done considerable work on Broadway, including Shakespeare productions of “Julius Caesar” and “King Lear” — and directed for the Lyric by Matthew Ozawa, the production had the assured aura of less is more. 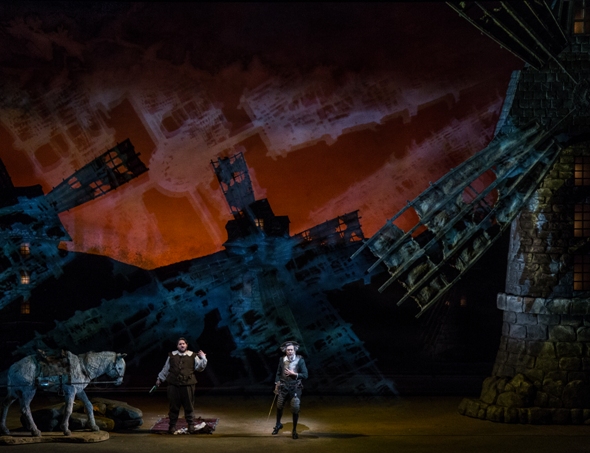 Massenet’s music is often ravishingly beautiful, but his 1910 opera was hardly considered cutting edge even in his day, and history has paid more attention to Strauss’ “Elektra,” which came a year before, and Bartók’s “Bluebeard’s Castle,” which came a few months after. Yet there is certainly a place for this music in the repertoire of companies that continue to perform “La bohème,” “Madame Butterfly” and all of Verdi. 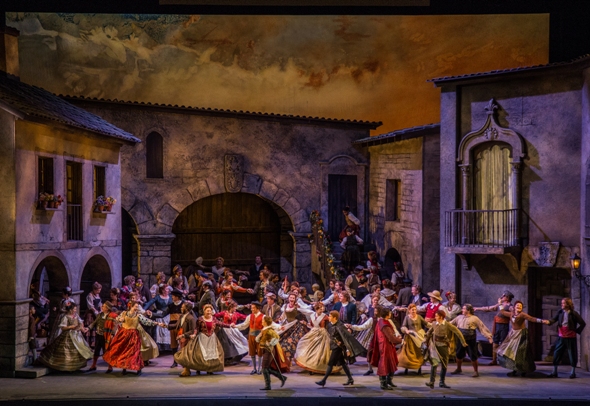 Indeed, the Lyric slipped right into the Massenet flow. The orchestra under music director Andrew Davis and the chorus under Michael Black have been exceptionally busy this fall — not to forget the many Ryan Center members who had secondary roles in “Don Quichotte” on top of other duties. If rehearsal was scarce, it did not show. Indeed, the mood emanating from the stage was robust, relaxed and positively joyful.

Quichotte tilts at windmills with a lance so tall he can barely sustain his balance, but veteran bass Ferruccio Furlanetto’s meticulously crafted portrait is of a dignified, if rattle-boned, gallant whose daft dreams of romance and valor are the very imaginings that keep him alive. Blissfully delusional is this fragile hero-in-love as played by Furlanetto, a thoroughly engaging Don Quichotte who is the current singer of choice for a role that was created for the great Russian bass Chaliapin. 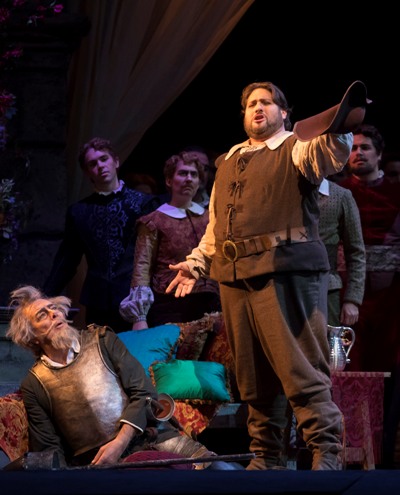 Furlanetto has sung Don Quichotte in Toronto, St. Petersburg, Madrid, Moscow, Palermo and San Diego. The bass is a fine musician with a flexible and splendid voice, but his ability to inhabit this character completely is what sets him apart.

The situational mirth was always present in Quichotte’s bearing, but so was the nobility that could convince a bunch of hardened bandits to relinquish prize jewels (the standout aria “Seigneur, reçois mon âme, elle n’est pas méchante”). The childlike delight with which this withered man struggled to craft a love letter was completely endearing. And the scene of Quichotte’s death, upon his love’s rejection, was painfully beautiful under Furlanetto’s command.

Quichotte’s sidekick, the rough-hewn and pragmatic Sancho, is brought to life by burly buffo baritone Nicola Alaimo, who proved a marvelous skeptic of his knight’s shenanigans. Sancho is our surrogate, really, because the doubter becomes a believer in spite of himself, defending Quichotte with a big heart against the hostility of public scorn (“Riez, allez, riez du pauvre ideologue,” superbly sung.)

And Quichotte’s love at first sight, Dulcinée, is lustily played by French mezzo-soprano Clémentine Margaine. The singer channeled her inner Carmen as the free spirit of a Spanish town, bored with being beautiful and twenty and adored, and looking for more. If Dulcinée can become smitten with this dotty hero of La Mancha, then who are we to doubt?