‘Les Troyens’ at Lyric Opera: An epic romance told in vibrant music (against a bleak setting) 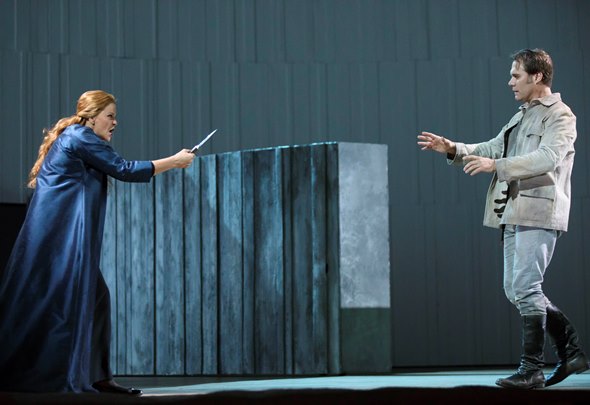 Berlioz’s grandiose opera “Les Troyens” is a tale of two cities. The ambitious new production mounted by the Lyric Opera of Chicago, the company’s first presentation of this prodigiously demanding work, is an epic venture with two outcomes. Musically, it is resplendent, a huge success by a stellar cast under the leadership of Andrew Davis; conceptually, which is really to say visually, this “Troyens” – The Trojans — struggles to bear its own leaden weight.

So static, gray and dull is the enterprise directed by Tim Albery and designed by Tobias Hoheisel that one might as well be looking at Berlioz’s operatic spectacle stripped to its musical essence as an oratorio – or, to invoke the composer’s own term for his “Roméo et Juliette,” a dramatic symphony. Would that it were, and that Davis’ elegant mastery of the music, and his superb singers, also held absolute sway over the senses. 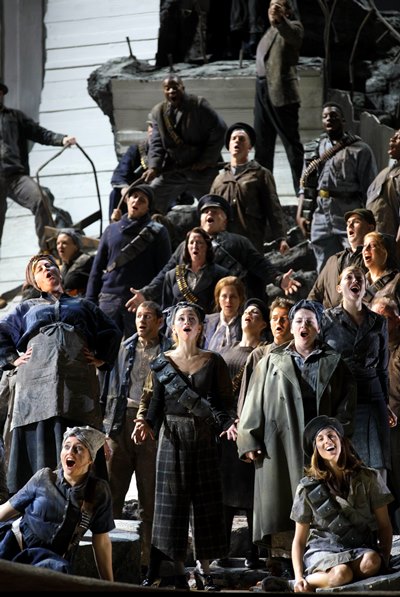 But that is not the case. It was only a couple of seasons back that Lyric staged the musical “Carousel.” Now the company actually has one: a carousel, and it goes round and round and round in “Les Troyens,” scarcely ever stopping. Round and round and…This production marks the new stage turntable’s debut, and if its zealous application here serves as augury, before the current season is out we may witness a new definition of theater in the round.

The endless rotation would be merely annoying were it not for the bleak bulk of a set that it conveys front side to back side, first – and, to be fair, quite purposefully and satisfactorily – as the long-besieged city of Troy. Shades of gray, at least fifty, rule in the city walls and in the mid-20th-century costumes (also by Hoheisel) of the war-weary Trojans. All that effectively establishes the pummeled milieu of the opera’s opening; the city’s fall to the Greeks’ infamous horse – represented here as a spectral shadow – works quite convincingly.

But the stony, high-walled set, somewhat modified, is then pressed into second duty as emergent, vital, optimistic Carthage, where the Trojan commander Aeneas and his doughty band of soldiers find shelter from the storm en route to their destiny as builders of Rome. Only this Carthage is neither beautiful nor beckoning; in fact, it looks a lot like the ruins left behind at Troy. Its monolithic aspect is harsh, unyielding, and again it goes relentlessly round and round. Against this stark backdrop, the glorious queen Dido and the hero Aeneas must fall in love and visualize an idyllic life together. (Never mind that Aeneas has a date with history and Dido is doomed to heartbreak.) 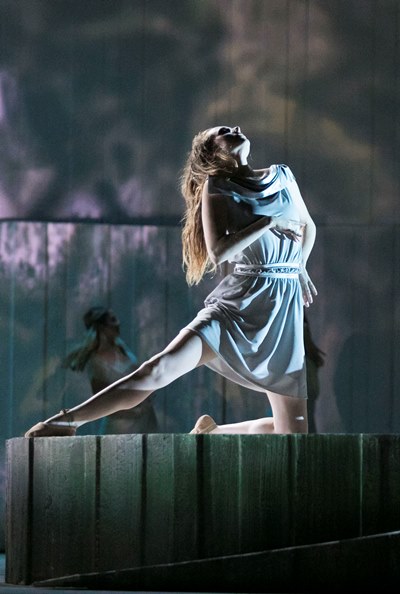 Happily, the assembled voices transcend their surroundings to make us believe. Mezzo-soprano Susan Graham is a stately Dido whose intelligent and finely textured singing reveals the queen’s vulnerability and ultimately drives home her rage at Aeneas’ perfidy. She is handsomely matched by tenor Brandon Jovanovich’s ringing performance as destiny’s favorite son, the bold Trojan who will re-create his lost city in the majesty of Rome. Their final confrontation, Graham’s furious vocal assault on Jovanovich’s parrying but resolved Aeneas, puts a stellar night of singing over the top.

Yet formidable as Jovanovich’s Aeneas may be vocally, the production does not allow this mythic figure to expand into full form as larger than life. Aeneas in casual jacket, slacks and sport shirt hardly seems the erstwhile warrior in arms with mighty Hector or the foe of great Achilles. He’s more like a nice guy who eventually can’t handle commitment and leaves his girlfriend at the altar. Or, in this case, pyre.

Perhaps the critical failure of a directorial concept that’s constantly at loggerheads with the music occurs in Berlioz’s colorful “Royal Hunt and Storm” episode, one of several orchestral interludes that depend on imaginative staging to keep the narrative moving forward. Here it begins intriguingly enough as Dido’s dream, in which she visualizes a glittering waterfall, a stunning video projection behind balletic sprites. But the staging falters at the key point of Dido and Aeneas’ retreat from the storm into a cave, a scène d’amour that here amounts to little more than a cozy promenade along a high, shadowed wall, ending in a simple exit stage left. This could just as well have been the queen and her gardener inspecting the estate. Somewhere the message got muddled: It is vengeance, not romance, that is best served cold. 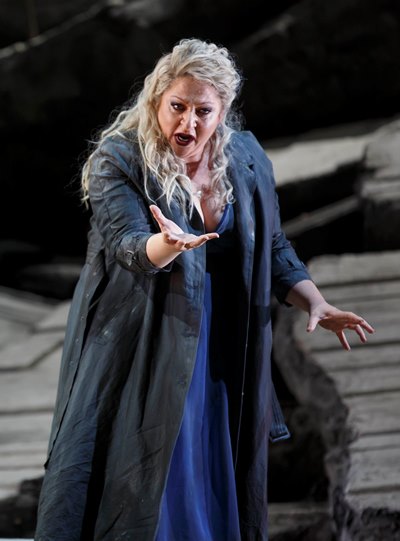 As thoroughly rewarding as Graham and Jovanovich are together, their convergence in Act III only meets the high standard established in the early going, back in Troy, by soprano Christine Goerke as the prescient Cassandra and baritone Lucas Meachem as her betrothed Chorebus. Goerke is a dramatic force and vocal whirlwind as the clairvoyant who grasps the Greeks’ deception but cannot stem the joy of her fellow Trojans after the grinding siege finally appears to have ended – and with a grand gift in tribute, at that. Meachem brings a winning blend of strength and compassion to his performance as a man who tries valiantly but in vain to assuage the obsessive fear that grips the woman he loves.

Amid a huge cast, other fine contributions bear noting, chief among them mezzo-soprano Okka von der Damerau’s warm and pliant singing as Dido’s sister Anna. Mezzo-soprano Annie Rosen added a lovely voice as Aeneas’ young son Ascanius, and tenor Mingjee Lei offered a silvery-voiced ballad that came as near as anything to stopping the show. Likewise, tenor Jonathan Johnson, as the young Trojan soldier Hylas, provided a sweet interlude with his lament for the lost motherland. And bass-baritone Christian van Horn, as Dido’s minister Narbal, showed a virile, well-schooled voice in all of his many vocal moments.

“Les Troyens” is very much a choral opera, and the Lyric chorus generously displayed its meticulous preparation by director Michael Black. Whether expressing the short-lived exuberance of the beleaguered Trojans, the better-founded optimism of the Carthaginians or the restiveness of Aeneas’ soldiers, the choristers acted with conviction and sang with collective precision. So, too, the Lyric Opera Orchestra distinguished itself in a deceptively virtuosic score by a composer who was unsurpassed as a tone-painter and constantly challenges musicians to get the colors right. Andrew Davis, he of the brush-like baton, fashioned “Les Troyens” into a musical portrait teeming with passion, and life transmuted to a scale of mythic magnificence.