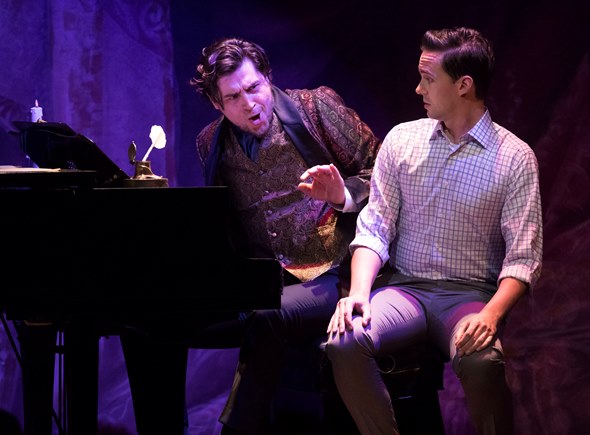 The setting is Transylvania. Oh, wait a minute. I mean Schaumburg, and Bayreuth. I was confusing “Longer, Louder Wagner!,” the wild and crazy Second City-Lyric Opera of Chicago send-up of Wagner’s “Ring” operas, with the Mel Brooks-Gene Wilder film “Young Frankenstein.” Silly me. And yet…he is alive! 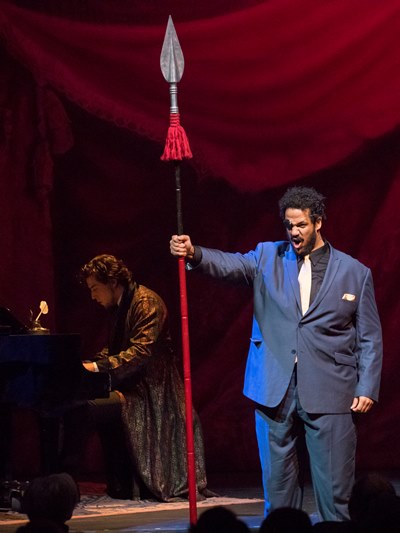 You will recall that Wilder plays an American professor of anatomy and medicine, Dr. Frankenstein: That’s FrankenSTEEN; not, you know, the other pronunciation –  at least not until he’s immersed up to his elbows in his infamous forebear’s old books on recreating life. Whereupon he feels quite an electrical surge of his own, and reimagines himself as FrahnkenSCHTEIN.

Well, just such an epiphany befalls Schaumburg community theater enthusiast Fred Wagner – that’s Wag, like a doggy’s tail, WAG-ner. But I’m so ahead of myself.

Shy, diffident, self-effacing Fred (Tim Ryder) has agreed to direct a modest Richard Wagner opera project here in his Illinois comfort zone – urged on by a gnarly casting director (Sayjal Joshi) and his proud wife Karen (Alice Stanley Jr.), who by the way is on the cusp of getting her doctorate in library science. They’ve scrimped and saved to accumulate the tuition she’ll need to complete her studies. That’s all I’m saying.

Meanwhile, over in the real Valhalla, that citadel of the true Wagnerian faith known to the rest of us as Bayreuth, a planned production of the “Ring” cycle has lost its director. Meanwhile (again), Fred has owned up to being a direct-enough descendant of You-Know-Who, and – to make a long story, against the Wagnerian model, short – succumbs to determined pressure to go to Bayreuth and save the day.

Meanwhile (yes, I know, but this is the “Ring,” so there’s a lot of back story), through a sort of time-lapse-cum-historical-muddle, the actual Richard Wagner materializes (the too-tall but perfectly arrogant Jesse Case, who’s also a terrific pianist, so that’s forgiving). As a riotous ensemble schtick unfolds, led vocally by bass-baritone Jonah D. Winston, the composer muses on the vast operatic tetralogy that will take him a quarter-century to complete. He appears in spirit to Fred (a nickname, aha, for Siegfried) to remind the hesitant director of the duty he bears. Wagner the notorious hedonist also turns Fred on to the indescribable pleasure of wearing silk undies. 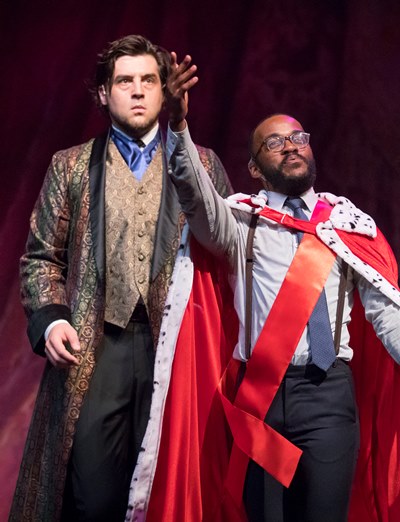 As I am entitled to one meanwhile per opera, I use the fourth one now: We are flung back to the visionary composer’s years of spiritual yearning, indeed of wandering, in search of a suitable place to mount this greatest of all operatic undertakings by the greatest of all opera composers. (Can Verdi claim such a monumental Gesamtkunstwerk? No. End of story – almost anyway, but wait for it.) Who should cross Wagner’s path but King Ludwig II of Bavaria (as giddy as he is gay in the regal robes of Travis Turner)? Wagner mulls the implicit price of having the world on the half-shell and decides, oh, what the hell?

Here might be a good place to note a cultural crisis in this play written by Second City’s Tim Sniffen with original music by Case and stage direction by Anneliese Toft. In mid-preparation of the “Ring,” a scion of Bayreuth (Travis Turner again) commits the unpardonable sin of expressing a preference for – Wotan protect us – Verdi! His mortified dad (Randall Harr) senses the shame of the Fatherland falling about their ears. Talk about a show stopper.

OK, maybe that didn’t actually bring events to a halt. But this did: soprano Tracy Cantin’s entrance from somewhere at the back of the room, Lyric’s intimate rehearsal hall, singing the Valkyrie Brünhilde’s famous battle-cry aria “Ho jo to ho!” Whoa, the genuine article had just arrived – a huge, ringing, glorious voice. Cantin is an alumna of the Lyric’s Ryan Opera Center, and a stunning credit to the program she is.

Eventually, of course, the curse of the “Ring” catches up with Siegfried “Fred” Wagner (or, by now, Vahg-nuh), who goes all in with the Immolation Scene, and then some. It’s a monster ending.