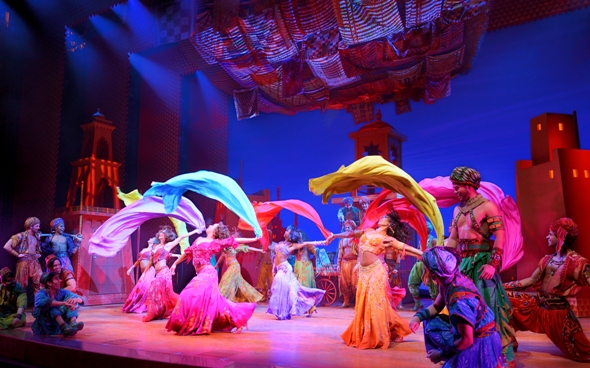 This Just In: The following is from a news release written by an arts organization.

Reservations for groups of fifteen (15) or more are now being accepted by calling (312) 977-1710. Beginning March 2016, Broadway In Chicago subscribers will have the opportunity to purchase tickets to the production. Single ticket on-sale for the general public will be announced at a later date. For more information, visit www.BroadwayInChicago.com.

“Aladdin will be the fourth new production we’ve launched in Chicago in 16 years. Chicago’s canny audiences, its theatrical infrastructure and its stunning theatres make it a peerless town for creating new productions,” said Thomas Schumacher, President and Producer, Disney Theatrical Productions. “We are thrilled to return with Aladdin.”

Lou Raizin, President of Broadway In Chicago, said, “We are excited Chicago will be the first North American city outside of New York to see Aladdin.”

Aladdin opened on Broadway to critical acclaim on March 20, 2014 and quickly established itself as the biggest new blockbuster in recent years, already welcoming well over one million people and finishing 2015 among the top three highest-grossing shows on Broadway. Aladdin‘s success continues internationally with productions in Tokyo and Hamburg and upcoming sit-down productions in London, Sydney and additional cities yet to be announced. NBC-TVraves “Aladdin is exactly what you wished for!” New York Magazine calls it “Musical comedy wish-fulfillment!” while The New York Times hails the show as “Fabulous… Extravagant! It defies expectations,” and the Daily News declares, “Seriously, it’s amazing!”

Aladdin, adapted from the Disney film and centuries-old folktales including “One Thousand and One Nights,” is brought to fresh theatrical life in this bold new musical. Aladdin’s journey sweeps audiences into an exotic world of daring adventure, classic comedy and timeless romance. This new production features a full score, including the five cherished songs from the Academy Award-winning soundtrack and more written especially for the stage.

The animated film Aladdin was released by Disney in 1992 and was a critical and box office smash, grossing over $500 million worldwide (not adjusted for inflation) and becoming the highest-grossing film of the year.

The film won the Oscar for Best Original Score and introduced the hit song “A Whole New World,” which won the second of the film’s two Academy Awards as Best Original Song. The Peabo Bryson/Regina Belle recording of the tune soared to #1 on the Billboard Hot 100 chart.