Preview: Norbert Leo Butz plays Edward Bloom, a Herculean story-spinner who supersizes his own legend in the musical “Big Fish.”  We caught up with Butz at the Oriental Theatre, where the Broadway-bound musical is in previews and two-time Tony winner is trying this fabulist father-son story on for size. We sneak a listen, too.

When a celebrated novel about a teller of tall tales morphs into a major motion picture and then becomes the next big idea for a Broadway musical directed by Susan Stroman, you figure most actors up for parts will know a lot about it before ever going in.

But that’s not the way it was for Norbert Leo Butz, the star of “Big Fish,” which is being developed here in Chicago for an October Broadway opening, and is now entering its final week of testing in front of live audiences before critics have their say. 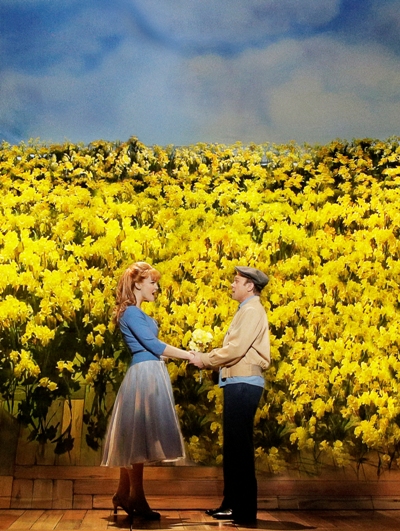 “I had never seen the film, never read the book,” says Butz, a two-time Tony Award winner for best actor in a musical who recently sat in the upper lobby of the Oriental Theatre and recalled that his first encounter with the material in any form was when he was asked to sing some things for composer/lyricist Andrew Lippa.

“I fell in love with the music at once,” he says. “Then we all got together for an informal reading, and it just gelled. It seemed like the role I’d been waiting for all my life. ”

Butz plays Edward Bloom, a traveling salesman and compulsive, over-the-top raconteur from the American South — held high in the affections of almost everyone who knew him except for Will, his overshadowed and estranged son. The new musical by John August and Andrew Lippa, based on the novel by Daniel Wallace and the Columbia Pictures film, came to Chicago’s Oriental for a five-week run in part because of tax breaks the State of Illinois created to lure big show development to Chicago.

Will’s determination to sort the truth of Edward’s life from his self-admitted “gigantificationism” prompts a story told in flashback that has Butz playing himself at various eventful stages: high school prankster, lovestruck adventurer, catfish wrangler, keeper of secrets in middle age. 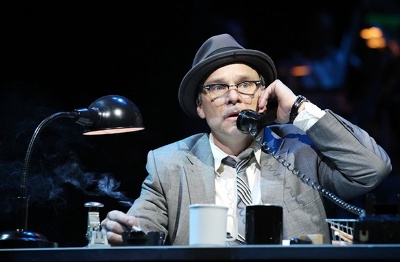 Edward’s many fantastical phases no doubt ring familiar to Butz. He, too, has played many parts, starting out on Broadway as Roger in “Rent” (succeeding Adam Pascal) and moving on to Fiyero in “Wicked,” Freddy in “Dirty Rotten Scoundrels” and more recently Agent Carl Hanratty in “Catch Me if You Can,” which garnered him a Tony.

Now 46, the seasoned actor says Lippa’s music for Edward instantly struck him as “very lyrical, very melodic and lush — not a character part, which is how I would describe the role I played in ‘Catch Me if You Can.'”

Although most of the tunes are still unrecorded and under wraps, “Fight the Dragons” is the kind of instant standard that one can easily imagine convincing Butz to sign on. In the musical it’s Edward’s defense for his flagrant exaggerations to a doubting son, but the lyrics register much more universally, as the essential challenge of any father to inspire, protect and prepare a child for the inevitable day when the parent will be gone. 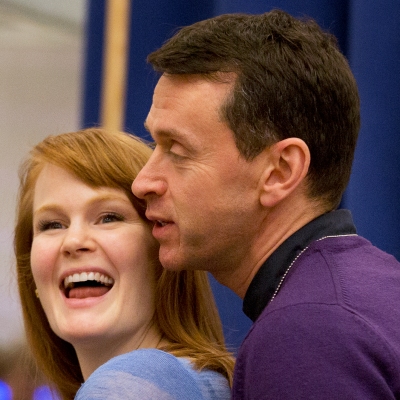 Another song — “Time Stops” (click here to view it) — is a duet for Butz and Kate Baldwin, who plays Edward’s sweetheart and eventual wife. “It’s written for our younger selves,” said Butz, who found singing it a personal revelation.  “I have lived a while. Now I have this chance to go back and recapture the feeling of being 19 or 20 and falling in love at first sight. It’s a unique opportunity for me, to remember what it was like to be 19 and to have no clue. And the song itself is very beautiful.”

In some cases a lead actor can participate in a show’s development from early on. “But I came into ‘Big Fish’ fairly late,” says Butz. “It was about six months ago, as opposed to ‘Catch Me if You Can,’ which I was involved with over a couple of years.”

Butz worked with Lippa for about six months, before rehearsals started in early 2013. By the time the troupe arrived in Chicago in March, the show was in “Stro-time,” as Butz is wont to put it. That’s when all aspects of the physical production get sorted out under the director’s scrutiny — myriad technical decisions about lighting, costumes, sets and projections as they appear in real-time sequence, not to forget continual polishing for the cast in lines, timing, movement. Anything and everything that needed attention. 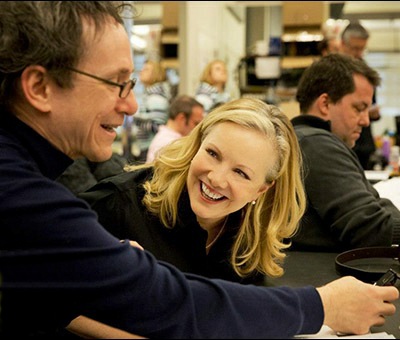 The film’s co-producers Dan Jinks and Bruce Cohen said they had no idea Stroman would be interested when they first kicked around the idea with John August, who wrote the screenplay, of doing “Big Fish” as a musical. “Within a year we met the incredible Andrew Lippa,” said Jinks when he stopped by the Oriental recently. “And from time to time we would get this gift — either a great new scene from John or a great new song from Andrew.

“Two years ago we learned that Susan Stroman would be pleased to take a meeting. She’s at the top of everybody’s list who wants to go to Broadway, of course. So we did the whole show for her front to back. At the end she gave us her notes. And she’s going into some detail. And we looked at each other and asked ourselves, ‘Did she just say yes?’ ” 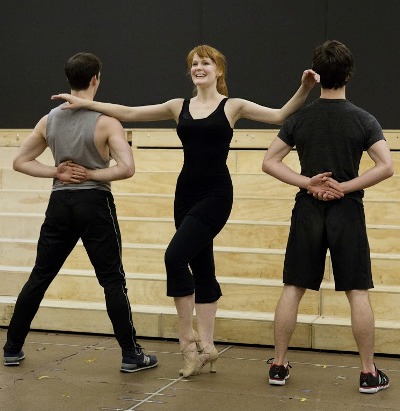 Although “Big Fish” will almost certainly undergo additional changes between May 5, when its five-week Chicago run closes, and Oct. 6, when it opens at the Neil Simon Theatre in New York City, the fully staged Chicago production with digital projections is the physical show designed for Broadway. Bobby Steggert plays Edward’s son, Will, and a large cast of singing dancers has been contracted, as one might expect from Stroman, whose imaginative dance numbers are legendary.

Such a memorable terpsichorean moment in “The Producers,” which Stroman also developed in Chicago before the show moved on to Broadway and film, involved a parade of grannies in their walkers. Edward’s tall tales have no doubt provided the choreographer with material for similar flights of craziness.