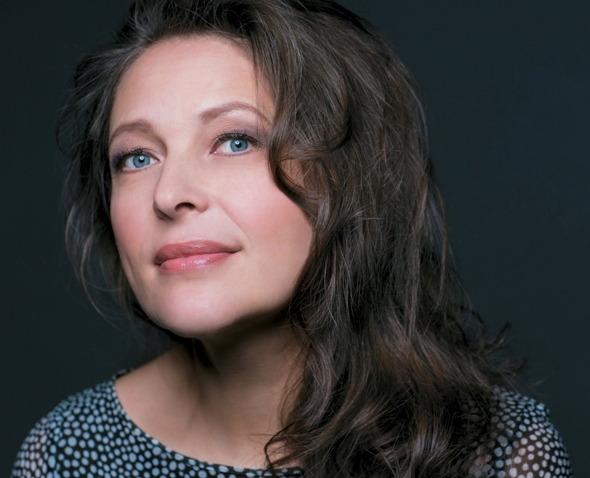 Russian dramatic soprano Tatiana Serjan, who riveted audiences as Riccardo Muti’s Lady Macbeth with the Chicago Symphony in 2013, will return to the Windy City next January to sing another knife-wielder, Floria Tosca, the tempestuous diva who tries to outwit a tyrant and foil her lover’s assassination.

The news came Jan. 27 when the Lyric Opera of Chicago announced its 2014-15 season at the Civic Opera House, presenting the highlights of its diamond jubilee line-up as creative consultant Renée Fleming sat in on the big screen from New York City.

Fleming herself will take on a signature role during the company’s 60th anniversary season — Countess Madeleine in Richard Strauss’ final opera, “Capriccio,” on sets from the Metropolitan Opera, with Lyric’s music director Andrew Davis on the podium.

Here’s the eight-opera line-up by date:

Baritone Mariusz Kwiecień, a Lyric favorite, takes the role of the incorrigible Don Juan, pursuer of women, assisted by the wise-cracking servant Leporello who keeps track of his boss’s escapades (bass-baritone Kyle Ketelsen).

“Don Giovanni” was presented on opening night of the Lyric Opera’s first season in 1954. “It’s only appropriate that we celebrate the 60th anniversary with a brand-new production,” says Davis, who will conduct. “I always feel like ‘Don Giovanni’ was written in the heat of the moment. It has a wonderful spontaneity.”

“‘Capriccio’ was  the first opera I ever conducted, and it’s still one of my great favorites,” says Davis. “Renée owns the role of the Countess. It’s one of her great roles in which that glorious sound just comes pouring out. She also has that wonderful sophistication onstage that just brings the character to life.”

The Metropolitan Opera’s production, originally conceived by John Cox, will be revived by director Peter McClintock.

In the great role of the gypsy Azucena in this romantic blockbuster will be mezzo-soprano Stephanie Blythe, with soprano Amber Wagner in her debut as the noblewoman Leonora.  “Il Trovatore” is “full of vocal showpieces,” said Freud. “Finding the demonic energy that drives the piece is the central  musical and theatrical challenge. The David McVicar production presents a bold vision, and with Asher Fisch leading our topflight cast, the Lyric audience will discover the glories of this piece all over again.”

The story in brief: Troubador Manrico (tenor Yonghoon Lee) and the Count di Luna (baritone Quinn Kelsey) fight over Leonora’s love.  The mysterious Azucena hides a secret about the identity of her son, and tragedy ensues.

With bass-baritone Eric Owens as the lame Porgy, this Washington Opera production, conceived and directed by Francesca Zambello, will be conducted by Ward Stare. (Owens, it was announced Jan. 17, will be the Lyric Opera’s god Wotan in the company’s forthcoming Wagner Ring Cycle, beginning in 2016.)

The story in brief: On Catfish Row on the shore of Charleston, S.C., Porgy falls in love with Bess (Adina Aaron, debut), but she’s the girlfriend of flashy Crown (baritone Eric Greene).   Bess finds happiness with Porgy briefly, then succumbs to the “happy dust” of drug-dealer Sportin’ Life (tenor Jermaine Smith) and leaves Porgy bereft.

“Lyric had such a success with our company premiere during the 2008-09 season that we decided to bring (it) back,” Freud said.

The Lyric presentation is co-produced with the Minnesota Opera, which introduced it in 2012.

A star vehicle for great singers of the past such as Maria Callas and Joan Sutherland, who sang the role at the Lyric in 1985, Anna Bolena will be sung by soprano Sondra Radvanovsky, who last sang in Chicago as Aida in 2012. Lyric general director Freud called “Anna Bolena”  a bel canto gem and pronounced Radvanovsky “perfect for the title role because it requires real dramatic impact combined with vocal virtuosity.”

The story in brief: Anne Boleyn, the second wife of King Henry VIII (bass-baritone John Relyea),  senses that the king has grown tired of her, not knowing that he is now bestowing his affections on Jane Seymour (mezzo-soprano Jamie Barton). Richard Percy (tenor Bryan Hymel, debut) and the page Smeton (mezzo-soprano Kelley O’Connor) both love Anne, and Henry’s suspicions lead to catastrophe.

Conductor Dmitri Jurowski makes his debut in this Lyric Opera co-production with the Houston Grand Opera. Directed by John Caird, with sets and costumes by Bunny Christie, this staging has been seen in Houston (2010) and at the Los Angeles Opera (2013) but will be new for Chicago audiences.

Each season Lyric Opera selects one of its operas for an extended run featuring two different sets of singers in the lead roles. Serjan will play Tosca through Feb. 5, when soprano Hui He will take over. She sang Aida two seasons ago. The role of Tosca’s lover will be shared by tenors Misha Didyk and Jorge de Leon.

The story in brief: Floria Tosca and her lover, Mario Cavarodossi, nearly outwit the sadistic chief of police Baron Scarpia (Evgeny Nikitin, then Mark Delavan), who preys on women, but their plan comes tragically undone.

Wagner’s fifth opera, “Tannhäuser” is a powerhouse role for the title character. South-African tenor Johan Botha has sung it recently in Turin and Vienna. And in London, during the 2010-2011 season, Botha sang it at the Royal Opera Covent Garden on the same sets that are coming to Chicago.

The story in brief: The minstrel/poet Tannhäuser is torn between the sensual love of the goddess Venus (mezzo-soprano Michaela Schuster) and the purity of the saintly Elisabeth (soprano Amber Wagner). At a song contest sponsored by the Landgrave (bass-baritone John Relyea), Tannhäuser competes against Wolfram (baritone Gerald Finley) and other poets. All are shocked to discover that he has been visiting Venus’s lair. He is sent on a pilgrimage to Rome to ask the Pope’s pardon.

Written in 1968 but not performed onstage until 2010, “The Passenger” is a holocaust opera that tells the story of Liese (mezzo-soprano Daveda Karanas). She is traveling with her husband Walter (tenor Brandon Jovanovich) to his new diplomatic post in Brazil. On board Liese thinks she sees a Polish woman, Marta (soprano Amanda Majeski), whom she assumed was dead. The rest of the opera concentrates on events involving Liese and Marta at Auschwitz, including Marta’s reunion with her lover, Tadeusz (baritone Joshua Hopkins, debut), and Marta’s friendships with Katya (soprano Kelly Kaduce, debut) and Bronka (mezzo-soprano Judith Forst).

Click here for more from Chicago On the Aisle about the remarkable Soviet composer Mieczysław Weinberg and his opera’s re-emergence in modern times.

Lyric Opera is presenting the David Pountney production that originated at the Bregenz Festival in Austria in 2010. It received its U.S. premiere on Jan. 18 in Houston. Andrew Davis will conduct.

The most operatic of the Rodgers and Hammerstein musicals, “Carousel” is set in Maine, where Billy Bigelow is a brash carousel barker and Julie Jordan the sweet young woman who quits her job to marry him.  Julie’s wise cousin Nettie Fowler will be played by mezzo-soprano Denyce Graves, who has the famous song “You’ll Never Walk Alone.” The rest of the cast has not been announced, including the demanding role of Billy, who has one of the prize scenes in Broadway repertoire as he muses about whether his unborn child will turn out to be “My Boy Bill,” or a girl,  “pink and white as peaches and cream should be.”

For ticket information, go to LyricOpera.org