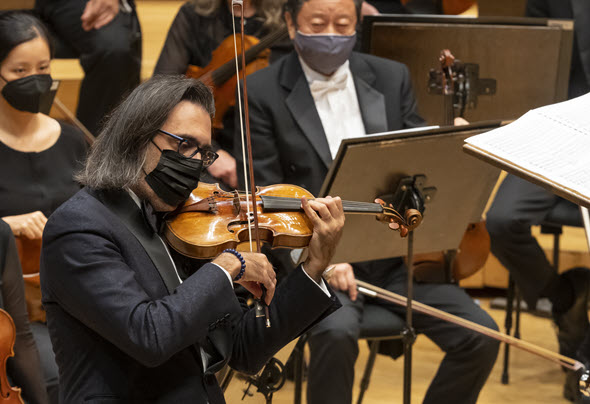 When the Chicago Symphony Orchestra announced plans for its first flourish of concerts for the 2021-22 season, finally bringing music back to Orchestra Hall after the bleak pandemic silence of more than a year and a half, one feature of the first two programs leaped off the page: The first and second weeks, both led by music director Riccardo Muti, would offer beloved and indeed essential symphonies by Beethoven — the Third (“Eroica”) in Week 1, followed in Week 2 by the Seventh. Given the grand drama of the “Eroica” and the dazzling brilliance of the Seventh, Muti’s choices struck me as pointed, unequivocal re-affirmations of life itself and at the same time bravura celebrations of this great orchestra. The events delivered all of that. 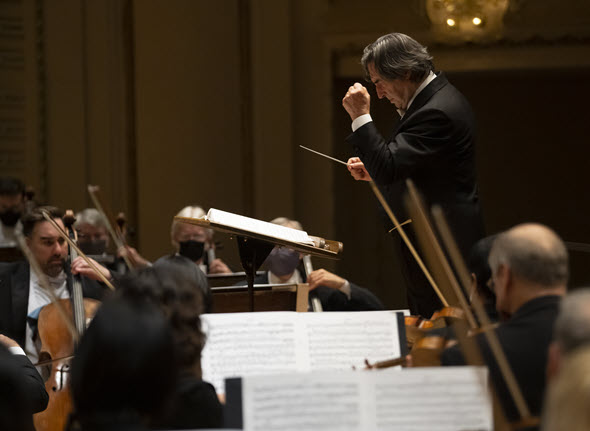 Riccardo Muti’s Beethoven Seventh: as intriguing as it was compelling.

The Seventh Symphony capped a Week 2 program that commenced on formidable and indeed glorious terms with Brahms’ Violin Concerto, featuring Leonidas Kavakos as soloist. Funny how circumstances can make random connections feel cosmically ordained. The last time Kavakos appeared with the Chicago Symphony, in the pandemic predawn of November 2019, Muti was on the podium and the work at hand was the Beethoven Violin Concerto. Kavakos’ eloquent, technically electrifying Beethoven drew me back to hear it a second time. His account of Brahms’ concerto was of the same order.

If Brahms’ Second Piano Concerto warrants its famous description as a symphony with piano obbligato, the Violin Concerto likewise immediately invokes the scope, plan and rigor of symphonic construction. In any case, Muti’s broad, leisurely tempo at the outset of the opening movement portended an epic, albeit in a pastoral setting. This was going to be gemütlich Brahms, expansive and radiant and gentle. Kavakos’ followed suit exactly, delivering Brahms’ long-lined phrases with honeyed warmth and effortless grace – until he plunged into a rhapsodic cadenza that flashed and soared while riveting ear and mind to that singular narrow space on the stage occupied by the violinist alone. The concerto had crystallized into a solo recital, Kavakos in otherworldly communion with Brahms.

In the perfect union of soloist and orchestra through that opening movement, one might have lost specific awareness of both Muti’s influence and the contribution of his forces. This was chamber music writ large, transfigured by the CSO’s glowing string sound, with finely integrated winds and brasses that could suddenly erupt with stunning power. The ensuing Adagio swelled to life on Brahms’ novel gesture of a long, lyrical oboe solo, served up with songful ease by principal William Welter. The movement spun out like an accompanied soliloquy, Kavakos’ mellow rumination attended by the orchestra’s quiescent empathy. But the finale fairly ripped, solo violin and orchestra thrust together in a mad dance, all fire and fury. The audience would have had an encore from Kavakos, but this is a season of concerts on the clock – 90 minutes and out. No intermission. Everyone masked. There was scarcely time to catch one’s breath before Brahms gave way to Beethoven Seven. 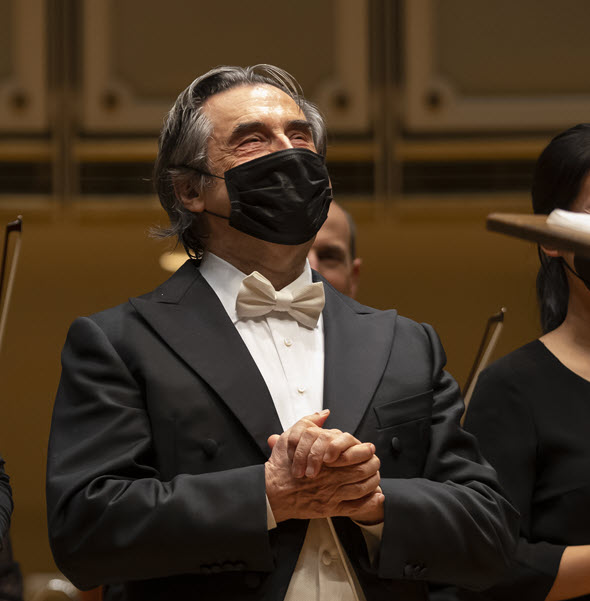 Muti’s sequence of Beethoven symphonies in the first two weeks was life-affirming.

It’s quite a jolt to lurch, bang-bang, from the Brahms Violin Concerto to Beethoven’s grand Symphony in A major. There’s good reason for taking a break, recalibrating the mind, resetting the emotions. But for now we’re in the new normal. And so there was Muti, back on the podium, kicking off the band with Beethoven. I wonder in the honest depths of how many hearts the Seventh Symphony holds dearest place – notwithstanding the magnificence of the “Eroica,” the astonishing concision of the Fifth, the sheer monumentality of the Ninth. Muti’s approach to the Seventh was highly personal, not exactly iconoclastic but bold in a way that might have bordered on brashness in a far younger conductor. Movement by movement, and taken as a whole, this was a Seventh Symphony as intriguing as it was compelling.

Wagner’s characterization of the Seventh as “the apotheosis of the dance,” by now a cliché, is expressive of the work’s constantly fluid interplay of tempo and rhythm. Jump in anywhere and you’re immediately caught up in the pulse of the symphony – and in its brilliant harmonic and motivic gamesmanship. Muti’s choice of tempos, which tended toward quickness, and his comprehensive awareness of the symphony’s internal workings imbued the music with a fetching freshness and edge. And yet nowhere was his account more striking than in the second movement Allegretto, a Baroque-tinged set of double variations that Muti took at an uncommonly slow pace. It was like listening to Bach, at once magisterial and sensuous, the counterpoint not just clearly articulated but also poised and charged.

The Chicago Symphony’s performance, precise and animated and luxurious, turned positively scintillating in the finale, which Muti took at blistering speed. Beethoven’s tempo marking is Allegro con brio, and modern scholarship suggests the composer likely had such rocket velocity in mind. Problem is, not many orchestras can toss off all those figurations at warp speed and still preserve shapely contours and clarity. But the CSO dispatched Beethoven’s whirlwind in heady style, in perfect formation. And with that, Muti polished off his remarkable Three-Seven combination. A familiar sound, certified, had returned to Orchestra Hall. 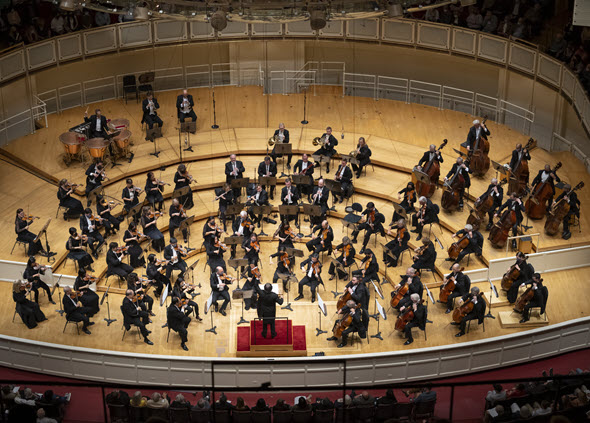