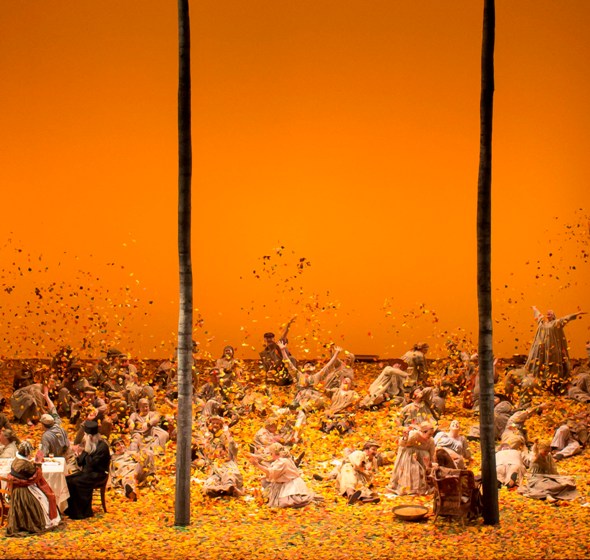 Review: “Eugene Onegin” by Tchaikovsky, starring Mariusz Kwiecień, at the Lyric Opera of Chicago. Through March 20. ★★★★

Love took a glorious beating in the final grand opera of the Lyric Opera of Chicago’s season, but then it has been pretty much that way since October. Prince Tamino and Princess Pamina may have landed safely in their happily ever after, but otherwise things ended badly for the aspiring lovers of 2016-17.

Scottish lass Lucia, forced to marry, went murderously insane in her bridal chamber. The gypsy Carmen was stabbed to death by a soldier she discarded. Rulers Dido and Norma, in separate operas, threw themselves on funeral pyres.

Now the Lyric gives us Tchaikovsky’s anti-hero Eugene Onegin, the aloof Russian noble based on Pushkin’s verse. The cynical heartbreaker is served a dose of his own medicine when the tables finally turn.

Wealthy Onegin, well-traveled and restless, gets his comeuppance after coolly rejecting Tatiana, the impressionable young daughter of rural gentry. Her letter scene, in which the transfixed girl stays up all night to pour out her heart’s rapture, is the perfect musical depiction of first love’s violently beating heart.

Puerto Rican-born soprano Ana María Martínez, in a role debut of abundant promise, played the delicate jeune fille who is crushed in her innocence, before maturing into a great lady of Russian society. (I saw her second performance.)

Some years later it is Onegin’s turn to be gloriously lovesick, and Tatiana’s to deliver a severe lesson in mooring as Onegin’s autumn looms. Polish baritone Mariusz Kwiecień, who sang the title role at the Lyric in 2008, returned to deliver a devastating package of elegance and self-deluding condescension, well matched in a battle of wits with Martínez at the end.

Robert Carsen’s production of “Eugene Onegin,” designed by Michael Levine, has been around since 1997, revived here by Paula Suozzi. It fits Kwiecień like a glove. The production was first introduced at the Metropolitan Opera in a conceptual pivot away from overstuffed period-style extravagance in favor of modernism’s spare lines.

If the production now seems somewhat mannered in its exaggerated shadows and extreme psychological focus, there is no small wisdom in Carsen’s laser-like fix on Onegin’s psychological state.

The opera unfolds amid fallen leaves as a scalding memory play, aglow with the late-season colors of burning obsession. Tatiana’s letter scene was a particular delight, her roofless attic room open to the midnight blue firmament with an adoring crescent moon. Alejo Pérez, who has previously conducted in Salzburg, Rome, and Buenos Aires, led a richly expressive performance, although he had the tricky challenge of balance to contend with; the cavernous set provided only a few sweet spots for the singers, who were sometimes swallowed.

Kwiecień’s Onegin was frankly scary as the young noble, seemingly unaware of the menace he telegraphed with careless impulse, all beautifully delivered in modulated tones that were as flexible as Kwiecień’s acting was lithe and subtle. This proud Onegin would have argued that he wasn’t really mean in his earlier years; he was merely bored at the countryside party to which he had been dragged by his best friend, Lensky, and being bored was an irritation.

Yet the plot takes a treacherous turn when Onegin decides to punish Lensky by flirting with his girl, Tatiana’s sister. Lensky, instantly furious, demands and receives the satisfaction of a duel, but Lensky misses his shot and Onegin, fatally, does not.

So when does this disdainful Onegin at last unravel? Director Carsen answered with perhaps the most ingenious aspect of the production; he eliminated the intermission between Acts II and III, so that Lensky’s deadly duel flowed straight into a lavish palace ball in St. Petersburg several years later. Onegin, frozen at center stage, was gradually re-clothed in formal attire by some servants, while others began placing chairs, which they precisely aligned in a (literally) wooden two-step, as guests in black assembled.

This severe, formalistic ballet substituted for what is normally a festive pageant. Personally, I prefer a dancing spectacle, but one can’t deny the dramatic irony of the director’s swiftly moving scenario. We learn that we are at the home of Prince Gremin, who has married Tatiana, now a beautiful woman of grace and dignity, and the reeling Onegin, passionately overcome, is determined to have her.

To believe what comes next, the opera absolutely requires a credible Prince Gremin, many years Tatiana’s senior, but deeply in love with his young wife and unaware of her humiliating adolescent crush on the man who now stands before him. When Onegin inquires who the beautiful woman is across the room, Gremin is only too happy to pause and reply with her praise at some length, as guests at his gala event swirl around them.

Russian bass Dmitry Belosselskiy was radiant in his ovation-stirring cameo, burnishing his aria with winsome touches that evoked the joys of late-in-life marital bliss. To hear him was to understand why Tatiana would never again fall under Onegin’s sway.

Likewise, the role of Lensky – Onegin’s loyal friend, then suddenly enemy and finally victim – is crucial to the tragic arc. It’s not often that an opera’s tenor is already dead by the second act, but American tenor Charles Castronovo made a hit of his premature exit as the doomed Lensky on the morning of his duel. His aria was a passionate farewell to life and ransacked romance.

Lensky’s sweetheart Olga was brought to life by Russian mezzo-soprano Alisa Kolosova in her favorable American operatic debut as Tatiana’s charming sister, with whom Onegin contemptuously toyed. If throughout this story, the balance between cynicism and love teeters back and forth, hearty oldsters played by Katharine Goeldner and Jill Grove, along with Michael Black’s Lyric Opera Chorus of amiable peasants and their happy children, tip the scale toward love.