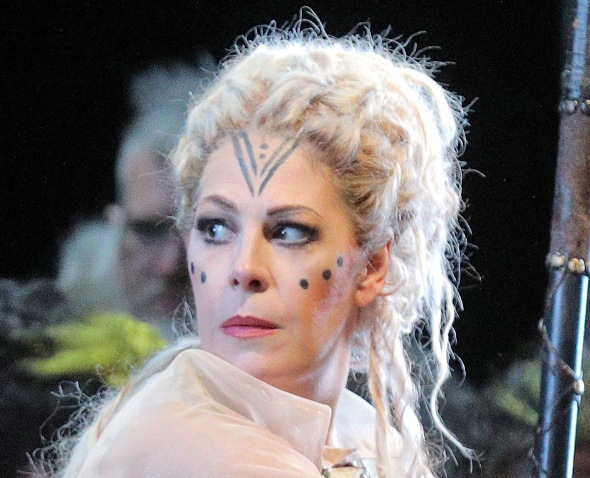 There is no Giuseppe Verdi at the Lyric Opera of Chicago this season, but lovers of meaty Italian melodrama are indulging their appetite with two of the most famous bel canto melodramas from the generation prior: Gaetano Donizetti’s “Lucia di Lammermoor,” with its legendary mad scene, which premiered at Naples’ San Carlo Opera in 1835; and Vincenzo Bellini’s “Norma,” with its famous prayer of torment “Casta diva,” which opened at Milan’s La Scala in 1831.

“Lucia di Lammermoor” was on the boards earlier this season at the Lyric. “Norma” opened Jan. 28 and continues through Feb. 24. It offers a ridiculous plot wedded to sensationally beautiful music, and it stars soprano Sondra Radvanovsky in a passionate turn as the majestic Druid priestess of ancient Gaul.

How strange, yet also fitting, that these two extravagant bel canto jewels should adorn the Lyric season together. Aficionados still marvel that the famous Greek diva Maria Callas sang these titanic operas twice each in November 1954 during the Lyric’s very first season. For good measure, the legendary diva threw in Verdi’s “La traviata” – also twice – that same November!! 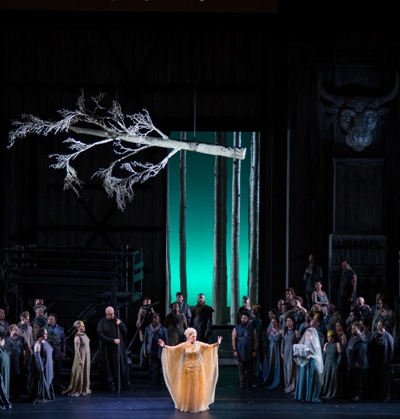 As the opera opens, Norma’s people have been struggling under Roman occupation and are preparing to fight back. But Norma is at the irrational breaking point, which is what dramatic coloratura singing often requires. She has been seduced and abandoned by the very Roman pro-consul the Druids all hate, and she has borne two of his children in secret, betraying her own people in the process, not to mention her most sacred vows.

Then things get worse. Not for opera fans, of course. Singers who can manage this demanding role simply don’t come along that often, and Radvanovsky’s steely stamina and artistic discipline were impressive. Her first aria, “Casta diva,” began tentatively, as if daring the house to see how softly she could sing and still be heard. But her command was riveting by the time she got to the rich despair of her hair-raising, magisterial fury. There was often beauty in Radvanovsky’s voice, but it was the fierce character in the music that drove her. Conductor Riccardo Frizza and the Lyric Opera Orchestra took care of her attentively. 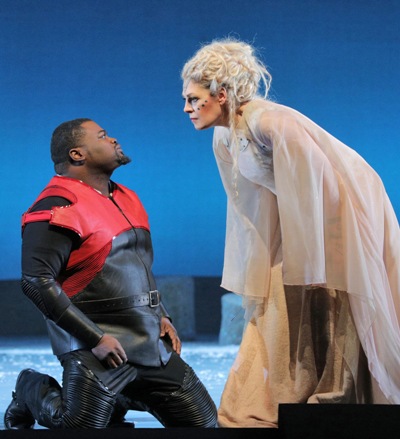 As for the plot, there’s no denying it is absurd, but Bellini’s music makes the emotions seem true, and the suspension of disbelief that’s required is far less extreme than any episode of “The Game of Thrones.” At its center, it’s a classic love triangle, with the Roman pro-consul (tenor Russell Thomas) seducing not only the priestess Norma but also her devoted young follower Adalgisa (mezzo-soprano Elizabeth DeShong), while keeping them both in the dark.

The end of the first act was a highly physical – and musical – tour-de-force, with all three at their best. The vocally assertive Thomas, at first all spinto bravado, revealed new complexity as Pollione was forced to go on the defensive. As the truth unfolded in clever switchbacks, conductor Frizza coaxed the combined forces into a tempest. 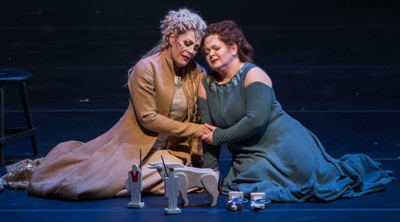 In a sadder, gentler scene in the second act, the twinning of Radvanovsky’s voice with DeShong’s in tentative, soothing harmony as Adalgisa interceded on behalf of Norma’s children, was sweet indeed. DeShong came across as caring, excitable and impetuous, the admirable sidekick, with an ample voice and exuberant personality of her own.

Director Kevin Newbury’s concept for “Norma” called for a more spectacular ending than Chicagoans saw; the priestess and her seducer, remorseful at last, were to walk into a funeral pyre. The production created for Radvanovsky and designed by David Korins was a four-way commission that debuted at the San Francisco Opera in 2014, traveled to Barcelona in 2015, then Toronto in 2016, and finally to Chicago. There were various changes along the way – some minor, some substantive, for example the Druids’ sacred white bull effigy that is set ablaze. In Chicago, the bull looked a lot like a Trojan horse without a purpose. 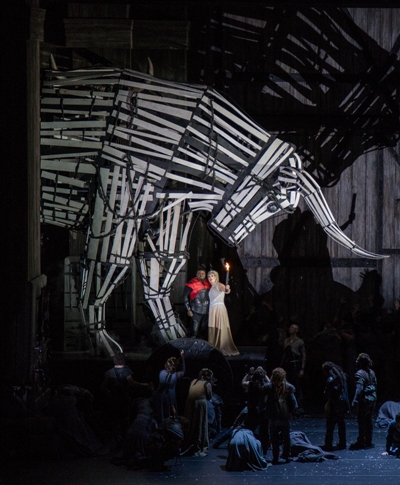 But in the Toronto production, for which images are available, and the Barcelona production, where a video was created, it was possible to get the sense of the intended consummation of Norma and Pollione in the bull’s purifying fire. Regulations in the city of Mrs. O’Leary’s cow may have got the better of this idea here; we glimpsed a lit torch, and not a big one at that.

Other aspects of the production succeeded. Korins and Newbury have done a number of operas together, including the 2015 premiere of  Jimmy López’ “Bel Canto” at the Lyric, and Korins has more recently created the sets for “War Paint,” a musical produced at the Goodman that heads to Broadway in March, and “Hamilton,” the Tony winner, now sitting down in Chicago. Typically, this team’s spaces almost become characters themselves. In “Norma,” the walls that keep the Romans out are a dark and imprisoning conscience, hiding guilty secrets; the sacred groves outside, which are occasionally revealed for Druidic rituals, seem unattainable, godlike.

Still, given the elegance of Bellini’s music, the set’s massive bulk seemed to enforce a sameness that occasionally put it at odds with the saga unfolding. I got tired of watching Michael Black’s chorus wander about as if trapped, doing nothing. Luckily they sounded excellent. 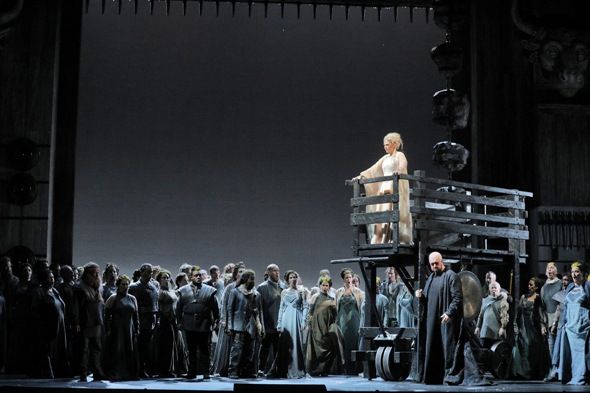