Lyric’s ‘Flute’ is a time-bending gift from ’50s, backyard fun boxed in spirit of Disney magic 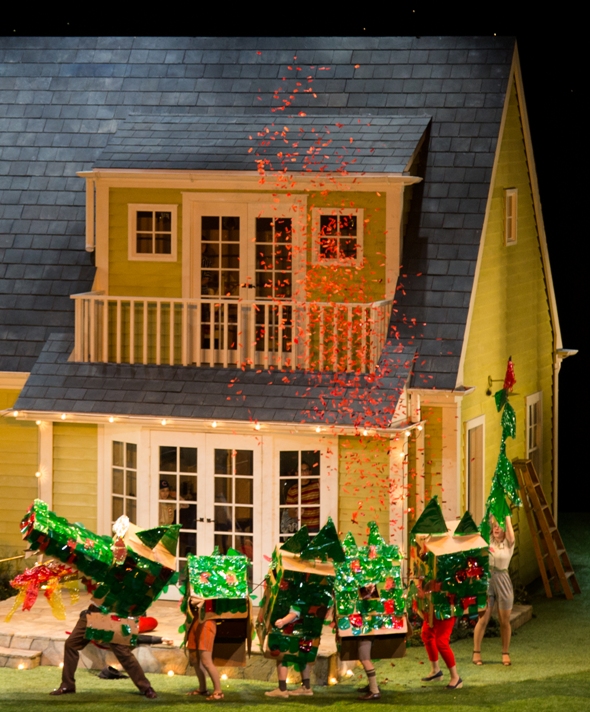 –
The ultimate holiday gift for arts lovers this season is Lyric Opera of Chicago’s rambunctiously retro world premiere production of Mozart’s “The Magic Flute,” set triumphantly in the world headquarters of the baby boom. Which is to say, a backyard of the ’50s and ’60s, as seen through the eyes of a child.

This nostalgic feat is an exceptional musical delight and a fine show for families of all ages, but it will bring tearful buckets of joy to those who have fond memories of Ozzie and Harriet — and Dick and Jane and Spot — in their own time.

What makes this show giftable is its extended January run.

Internationally renowned tenor Matthew Polenzani, a Lyric favorite, will take over the role of Prince Tamino for later performances, succeeding the endearing British tenor Andrew Staples, who stars through Jan. 8. Otherwise the cast, conductor and chorus — all of it — is the same. 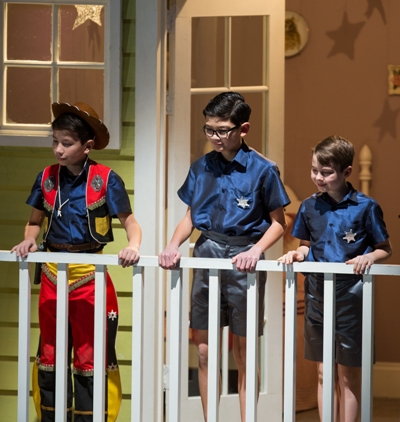 Mozart’s music is handsomely accomplished, right down to the three pure-voiced child sopranos — Casey Lyons, Parker Scribner and Asher Alcantara — who guide Prince Tamino on his way. The entire show, spoken dialogue and all, is done in the original German, with easy-to-read English surtitles.

Prince Tamino. I almost wrote Prince Charming. There’s a cheerful Disney wink in Tamino’s heroically jaunty feather cap and sweet Pamina’s puff-sleeved, circle-skirted homage to Snow White. But this makes sense — it’s how heroes and heroines would have been imagined by children of that day. Director Neil Armfield’s concept, beautifully designed by Dale Ferguson — with some dragon-conjuring puppetry by Blair Thomas — manages to be startling fresh, yet true to the innocent inventiveness of childhood. 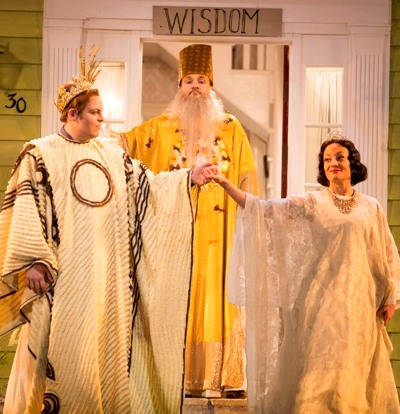 A cardboard train of shipping cartons, washer-dryer size, form a mighty dragon propelled by an army of children, visible from knees and pedal-pushers down. Chenille bedspreads and lace tablecloths adorn the wise leader Sarastro and his priestly followers in droll raiment. Prince Tamino’s bird-catching sidekick, the comically slow-witted Papageno, looks as fluffy as a feather-duster.

The complexities of the Masonic Order, which inspired Mozart, are whittled down to the Disneyesque, but with leading-role singers such as soprano Christiane Karg — as a surpassingly lovely Pamina, who opts for “Die Wahrheit” (truth) at a moment of terrible stress — the wisdom does shine through. 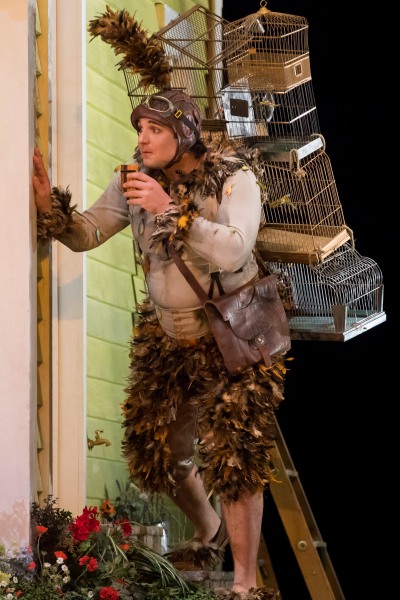 Dramatic coloratura Kathryn Lewek, as the evil Queen of the Night attended by three spirited ladies, and bass Christof Fischesser as the benevolent power for good, Sarastro, made impressive Lyric debuts. Robust bass-baritone Adam Plachetka, last seen on the Lyric Opera stage in the title role of Mozart’s “Marriage of Figaro,” was Papageno, the ordinary person’s ally, impatient and forgetful, given to telling whoppers and taking short cuts, but ultimately and amusingly redeemable. Conductor Rory Macdonald set a reasonably brisk pace throughout, at no loss to sweet clarity.

Opera classics are constantly being re-set in other eras, and the recent past is gaining hold in popularity. The Metropolitan Opera evokes a 1960’s “Mad Men” look for its current “La Traviata,” designed by Willy Decker; heroine Violetta wears a sleek red taffeta cocktail dress; the clock on the wall is still analog, and the colors have that Danish-modern minimalist flair. In the most recent Santa Fe Opera season, Strauss’s “Capriccio,” originally set in the mid-18th century, was updated to the 1940s. 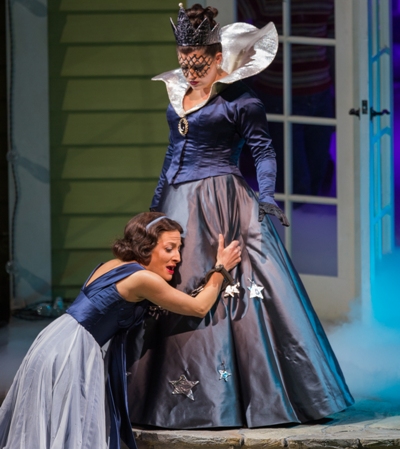 The Lyric’s “Flute” is peopled by adults who dialed telephone numbers that started with letters standing for Butterfield, or Murray Hill, or Echo Valley. A two-story frame house with attic windows enjoys its prideful place in this backyard performance, twirling slowly on the Lyric’s enormous turntable while the neighbors partake in a grand promenade of suburban ceremony.

Back then, when most corporations were multi-generation mom-and-pop stores on the corner, and cathode ray television tubes were the cat’s meow, people did hang out in the web of their day — an interconnected river of back yard lawns and patios. This “Magic Flute” is a  Cupid’s dart that will land squarely in the hearts of adults of a certain age, but it is also a fun-filled history lesson to those who were born yesterday.