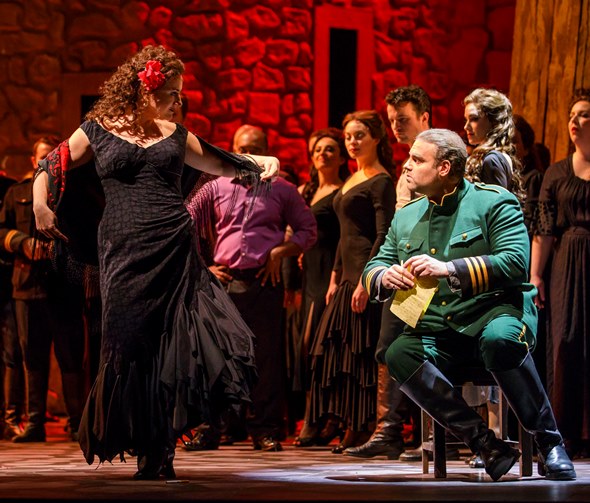 Review: “Carmen” by Georges Bizet, at the Lyric Opera of Chicago. New production with Houston Grand Opera. Thru March 25. ★★★

There is much to recommend the new Lyric Opera production of Bizet’s “Carmen,” a joint venture with the Houston Grand Opera. Topping the list is mezzo-soprano Ekaterina Gubanova’s scorching performance in her role debut as the Gypsy femme fatale.

But there’s reason as well for qualifying one’s enthusiasm. “Carmen,” an early expression of verismo opera, is the stuff of powerful drama and great theater. And it ends with a hair-raising payoff. Usually, anyway. This conception directed and choreographed by Rob Ashford loses its way in the final act, sacrificing both the opera’s festive splendor and its bitter face-down between the free-spirited Carmen and the latest man she has tossed aside. 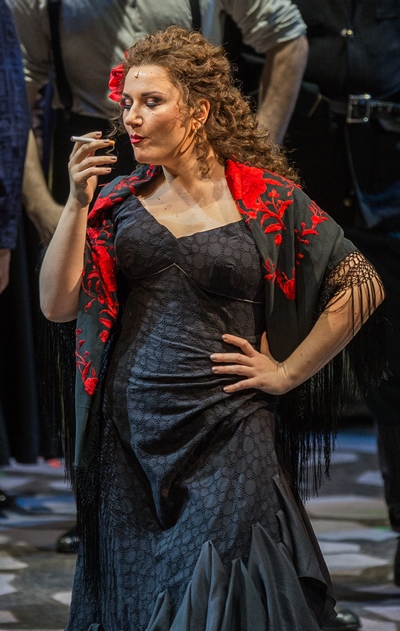 After reveling in three acts that were colorfully staged, perceptively conducted and passionately sung, I came away deflated by a finale that cut the opera off at the knees. The raw confrontation between the fatalistic woman who foresees her own death and the kid from the country caught in her web is arguably the real highlight of an opera beloved chiefly for its brilliant tunes. Ashford subverts the tragic denouement to his preoccupation with choreography — that, and a sequence of poor blocking choices.

To begin with, Ashford strips the spectacle from the pre-bull fight processional, a grand and joyous occasion worthy of the triumphal march in Verdi’s “Aida.”  Basically, he substitutes a ballet for the parade of principals who are about to participate in the main event. When Gubanova’s Carmen, not gaily gowned but rather in black as if for her own funeral, and the Don José of tenor Joseph Calleja – whose virile lyric performance was enhanced by focused acting throughout the opera – are left alone on the plaza, they commence a sort of mutual evasion.

When this Carmen spit out the defiant words, “Frappe-moi donc, ou laisse-moi passer” (Strike me then, or let me pass), the maddened José wasn’t even obstructing her path. To give due credit, the actual murder was quite effective. José whirled Carmen around and plunged his gleaming switchblade into her torso away from the viewer, but with fierce purpose. Would that the rest of the scene had been forged so hotly and urgently. 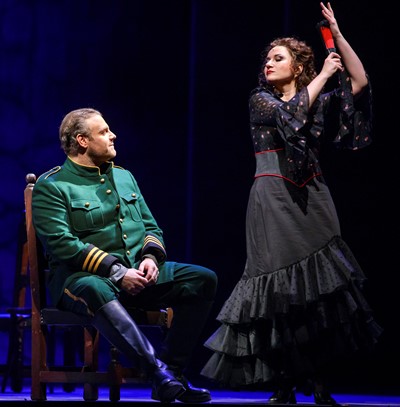 Heat, energy and fine singing were otherwise in ample supply. Gubanova quickly established her Carmen as a rebellious bird – though spider might be a more apt image – with a sensuous “Habanera” abetted by conductor Harry Bicket’s indulgently broad tempo. Bicket’s tempos were generally on the slow side, which allowed the singers’ French to be understood and events to play out spaciously and credibly.

On the point of comprehensible French, this production uses the original opéra comique style of arias with spoken dialogue as opposed to sung recitatives, and the added quality of naturalism only underscored the work’s gritty verismo character.

Gubanova and Calleja made an effective couple, precisely in the sense that couple is the wrong word. José is a naïve young man from the outback with a girl back home and a doting mother; Carmen is a sexual adventuress and, by the way, a criminal – part of a band of smugglers. When she accuses him of not loving her, he responds by pulling out the crushed flower he has preserved during his incarceration for helping her escape: Calleja made quite a touching moment of José’s aria “La fleur que tu m’avais jetée” (The flower you threw to me), which he sang with painful tenderness and deceptive technical finesse. 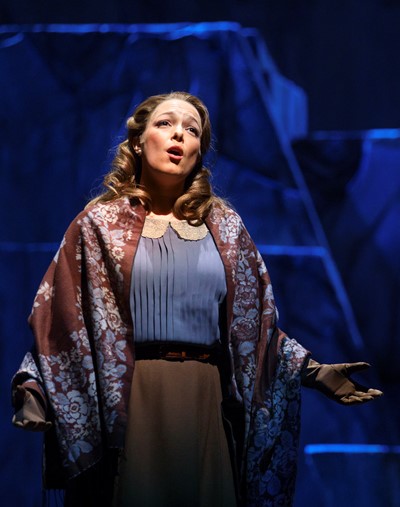 Gubanova’s individual triumphs were manifold, but two stood out along with the “Habanera.”

Her vocalise with castanets (not from her hands but from the orchestra, alas) in Act II, when Carmen entertains José alone at the tavern, was so richly voiced, so drop-dead beautiful that even I wanted José to stop worrying about the bedtime retreat he hears sounding from camp, and just listen.

In a radically different vein, and perhaps her best moment as singer and actress, was Gubanova’s turn with the tarot cards while holed up in the mountains with the smugglers, when Carmen flips card after card and sees nothing but death inscribed there.

Chalk that one up to the director’s credit as well, for isolating Carmen, who sings to no one but herself in a nihilistic soliloquy.

Soprano Eleonora Burrato was lovely as Micaëla, José’s apple-pie sweetheart (and, let’s face it, mother-avatar). In the girl’s prayerful aria “Je dis que rien ne m’épouvante” (I say that nothing frightens me), Burrato’s glorious singing reminded one why this is among the opera’s peak moments, and the opening night audience certainly found it so. 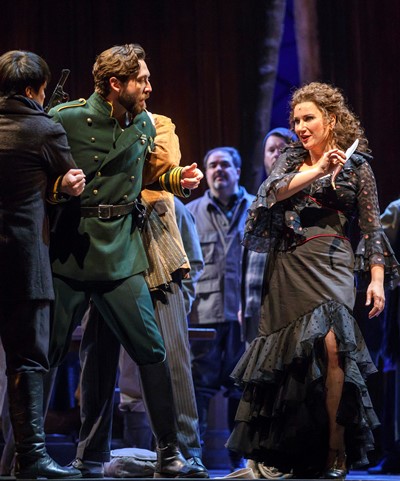 The Lyric’s Ryan Center training program for young professional singers might take a collective bow: The whole gang at Lillas Pastia’s tavern in Act II were either current Ryan members or alums, notable among them soprano Diana Newman and mezzo-soprano Lindsay Metzger as Carmen’s pals Frasquita and Mercédès, respectively.

Likewise fetching was bass-baritone Bradley Smoak, a current Ryan member who turned in a bravura performance as officer of the guard Zuniga. And an alum, bass-baritone Christian Van Horn, offered a strapping Escamillo with a voice as confident as his proud manner. His lusty “Toreador Song,” delivered from table tops, was a winning display of pure showmanship.

Elegant as the balletic interludes were, starting mid-overture, I admit to missing the earthy naturalism of flamenco dancers at Lillas Pastia’s. Nothing like some hammering heels to get the blood going. Similarly, David Rockwell’s abstract sets for this soil-based story left me indifferent.

The Lyric Opera Orchestra gave a vibrant account of Bizet’s ever-enchanting score. And one terrific thing more: the many and delightful street urchins portrayed by the Chicago Children’s Choir, marching about at the changing of the guard in Act I, a merry gang singing their hearts out. I loved ’em. Best I’ve ever seen.

The Lyric’s presentation of “Carmen” will undergo major cast changes mid-run. Effective March 16, mezzo-soprano Anita Rachvelishvili takes over the role of Carmen with tenor Brandon Jovanovich stepping in as Don José. At the same time, conducting duties will be handed over to the young Latvian maestro Ainārs Rubiķis