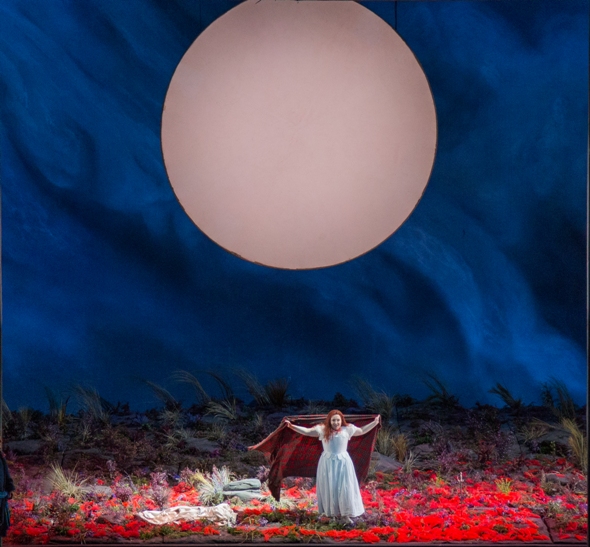 Despite its age, there’s something very modern about Lucia’s tragic disintegration in Vick’s not-to-miss installment at the Lyric. The role of the innocent and doomed Scottish lass Lucia — who is in love and secretly betrothed, yet forced viciously by her own brother into an arranged marriage — features one of the greatest mad scenes in all of opera. Its stratospherically high range and virtuoso pyrotechnics are set off by melting lines of sadness and the shocking alternate reality of the girl’s fracturing, murderous psyche. 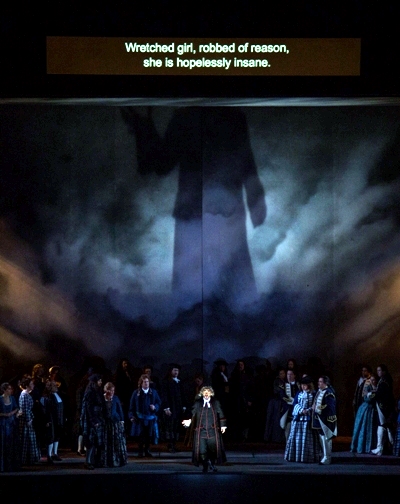 Vick sees the drama as a bel canto acid trip: The costumes seem Mozartian. The clouds are in turmoil; they could have been drawn by Van Gogh. The trees are enigmatic sentinels of the sort that Kubrick liked to conjure. The giant moon is an ecstatic fixation, as in the Strauss opera “Salome’” or the movie “Joe Versus the Volcano.”

In short, the production is constantly underscoring Lucia’s state of mind. The scene shifts are swift and smooth, done with panels that slide left and right, up and down, in and out like a camera shutter, concealing and revealing. A boggy moorland heath is summoned by a carpet of shrubby flowers, thistles and grasses. The Tartans are overwhelming, even awkward, totems of family honor, obligation, guilt. They are blankets, beds, suffocating things.

Vick’s smart production is a canny frame for the staggeringly talented Shagimuratova, who is a consummate exemplar of the coloratura art, with a breathtaking pianissimo and thrilling agility and volume at the bottom and the top.

Yet she is not a histrionic performer — not piercingly dramatic like a Callas, not a fierce acrobat like a Dessay. There is abundant drama in Shagimuratova’s radiant voice, gravity in her poise. Her approach is completely authoritative. Yet she is generally still as she sings. I don’t even want to think about Shagimuratova navigating the treacheries of the mad scene (“Il dolce suono”) while attempting to descend the steep, snakelike staircase in the Lyric’s previous “Lucia” production, by Wilson Chin. 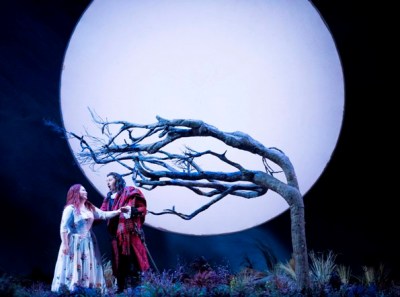 Everything came together in this impressive opening night, led by Italian conductor Enrique Mazzola, in his Lyric debut, with elegant, measured restraint and attention to detail in the Donizetti score. The company has secured not one, but three, leading singers all very right for their roles. Shagimuratova’s singing was repeatedly capped with explosive applause. Lucia’s desperate brother Enrico, sung by American baritone Quinn Kelsey, seemed nearly out of his mind himself from the first instant we saw him, a beefy, wild-haired man of some youth and physical power, his fine clothes a days-old mess of wrinkled despair. From his brilliant first aria, “Cruda, funesta smania,” more gruffly sung than usual, you could sense that Enrico would snap his sister like a matchstick out of frustration, were she not his one last hope to rebuild the family fortune.

Polish tenor Piotr Beczała, as Lucia’s true love, Edgardo, is crucial to the opera’s success because we see the power of her persuasion through him, and we recall the tragedy of her death through the last word of his agony. Given Beczała’s strong, youthful, ardent voice and manner, it is impossible to name a better match for this Lucia. Their duet of parting on the heath (“Verrano a tel sull’aura”), a rousing success, established the trusting, innocent ideal of their intended union, any hope of which is soon to be shattered. After Lucia’s death, the final scene of this opera can seem anticlimactic, yet Beczała’s transition from jealousy to torment and suicide held me to the end. 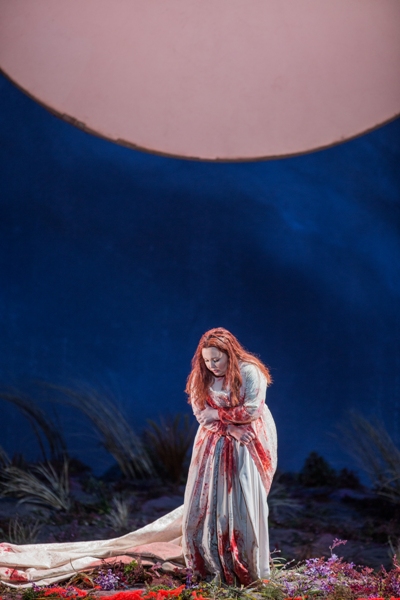 The casting throughout was solid. The Romanian bass Adrian Sâmpetrean was imposing as the dignified but misguided chaplain Raimondo; and Ryan Opera Center tenor Jonathan Johnson sounded terrific as the wealthy bridegroom in “Rosenkavalier” satin. The one aspect of this production I failed to comprehend was the pathetic attempt at a duel in which this bridegroom and other stakeholders kinda sorta engage. It was a limp-wristed affair that looked more like cowardly schtick out of Shakespeare’s “Twelfth Night” than anything remotely real.

For all the star turns in “Lucia di Lammermoor,” there is no doubt that this is at its heart an ensemble show. Conductor Mazzola, orchestra and chorus were commanding in their tasks. The passage that most of this audience is likely to recall upon leaving the theater is the sextet and finale of the second act, “Chi mi frena in tal momento?” — the show’s dramatic turning point. Like a movie dropping into slow motion, it’s when all must absorb the devastating implication of Edgardo’s sudden return as the ink is drying on Lucia’s forced contract of marriage.

Tensions rise, complications pile higher, Lucia’s anguish mounts and the story seems to spin inexorably toward its inevitable doom, while some of Donizetti’s most beautiful music unfolds. The orchestra and chorus become the wailing plea in an unreasoning world. It is one of the lyric theater’s great achievements, and this production nails it in a high point of the Lyric Opera’s recent history. 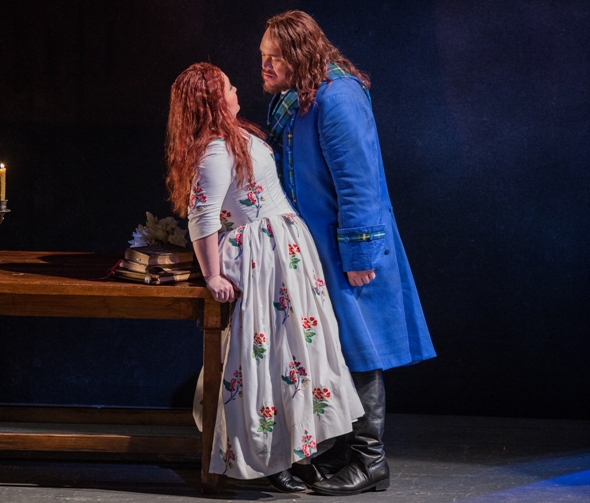