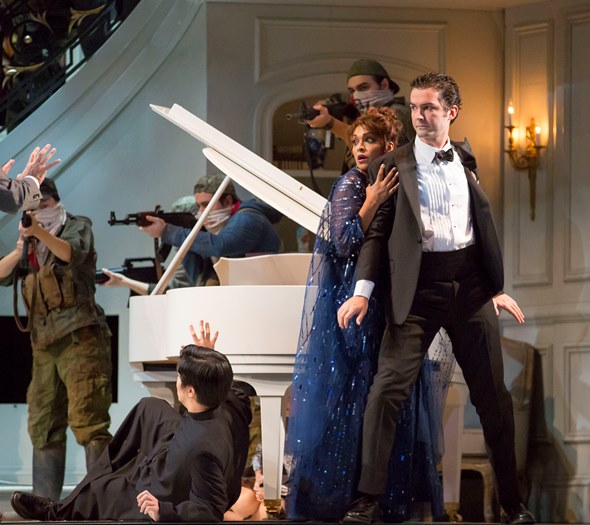 The true measure of Peruvian composer Jimmy López’s new opera “Bel Canto,” which received its world premiere Dec. 7 by the commissioning Lyric Opera of Chicago, transcends its check-list of merits as a skillfully wrought and thoroughly engaging work. It is a compelling tragedy expressive of humanity at its best and most aspiring, and at its most grievously imperfect. 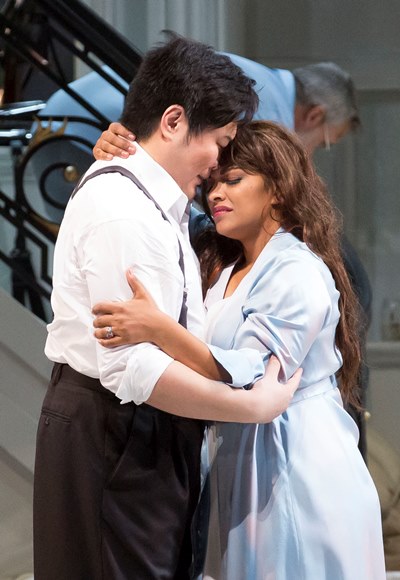 Loosely based on the 2001 novel by Ann Patchett, López’s opera concerns an incident in which a group of Peruvian terrorists seize the vice president’s mansion in Lima. As the occupation becomes prolonged in this fictionalized telling, friendships form between the hostages – including an American opera soprano hired to perform as a birthday treat for a Japanese corporate chief – and their captors. Ultimately, what evolves into a kind of socio-political idyll ends in a military assault and bloody deaths.

Distilling a novel to the necessary proportions of opera is a tricky business. Subplots must be jettisoned and illuminating context shrunk to a bare few strokes of information. All this Lopez’s librettist Nilo Cruzhas done, for the most part, with a dramatist’s sure eye and, still more impressively, with a poet’s ear. The richly metaphorical language of “Bel Canto” presses into the evocative realm of symbolist poetry. And López sets Cruz’s heightened imagery with music that is pervasively, unapologetically tonal, clearly and potently communicative. 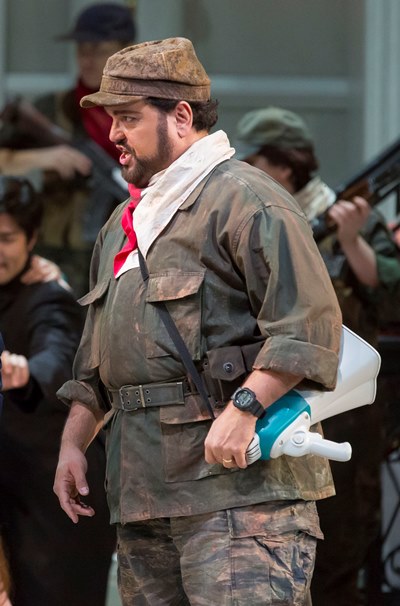 Though English dominates, the opera presents a polyglot of languages from German, French and Spanish to Japanese and Russian. And a very special day it is, with a large gathering of political swells assembled in party dress and spirit for the mogul’s birthday. Good cheer rules, for a while.

As the celebrated American soprano flown in for the occasion, Danielle de Niese brings to this unfolding drama both a radiant voice and, as things fall apart, the amusing feistiness of a prima donna who doesn’t have time to be a captive: She has a major engagement coming up and rehearsals begin soon so, really, couldn’t she just leave?

But once the terrorists crash this party, no one is leaving, anyway not initially. Then, as the invasion becomes a stand-off between the insurgents and the federal troops surrounding the mansion, concessions are made. The sick and elderly are allowed to go, and later the remaining women – except for the American singer. The terrorist commander (tenor Rafael Davila in a performance of imposing vocal authority and touching vulnerability) requires her to remain. Why? Well, it has to do with music and the transformative experience of hearing a great voice. It has to do with being human, on either side of a political line. 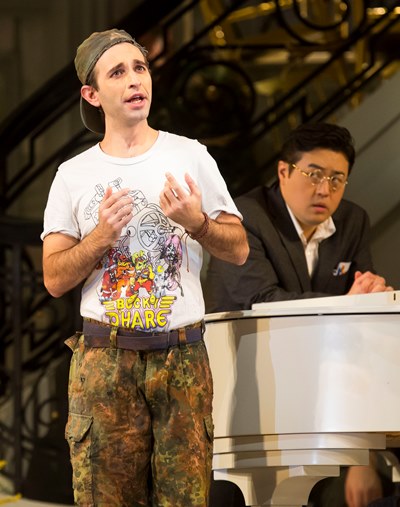 And here is where this remarkably rational, not to say compassionate terrorism feels quite different, even amid gunfire, from the horror in news reports these days. “Bel Canto” – or beautiful singing – is about human commonality. How apt that Lopez should bath the story in tonal music. What the invaders share in spirit with their captives increasingly bonds those with guns and those without. The American soprano even spots a young terrorist with a natural singing voice (countertenor Anthony Roth Costanzo) and begins giving him lessons — attended by everyone! It is a luxurious, albeit dense and complex, score that conductor Andrew Davis leads with equal parts of passion and grace.

And vocally generous, dramatically credible performances on every hand lend credence to this tale of radically different groups finding that they actually belong to the same brotherhood. As the big Japanese boss with a more than Platonic crush on the American singer, bass-baritone Jeongcheol Cha sang with affecting conviction; likewise, his translator (tenor Andrew Stenson) and a female terrorist with the evocative name of Carmen (mezzo-soprano J’Nai Bridges) matched fine voices in the plausible blossoming of romance. 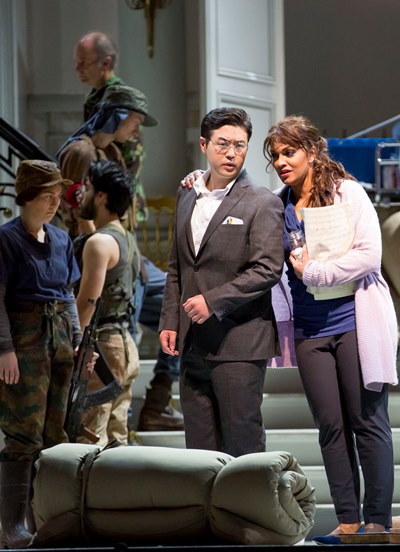 Strong vocal support also came from tenor William Burden as the vice president of Peru, bass-baritone Bradley Smoak as the terrorists’ second in command and baritone Jacques Imbrailo as the exasperated Red Cross go-between who sees the fantasy taking shape on the inside and knows it cannot end well. He is ever so right.

The Lyric Opera Orchestra and Chorus meet López’s lavish musical requirements with polished confidence, a worthy counterpart to the glorious mansion set devised by David Korins and the mash-up of costumes splendid and earthy by Constance Hoffman. Arguably, Davis and director Kevin Newbury should take a final bow together: This is very fine music-drama, at once bravura in style and authentically tragic. 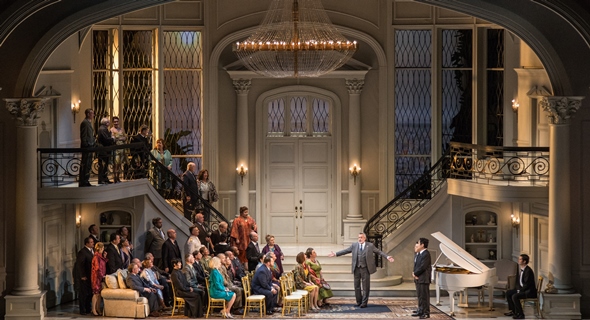