Review: “Lucia di Lammermoor” by Gaetano Donizetti, at the Lyric Opera of Chicago through Nov. 5 *****

It’s one thing for an opera company to create a new production, and quite another to inject a thoroughly familiar work with an esprit that feels newborn, surprising and illuminating. The Lyric Opera of Chicago has done no less with its dramatically charged and stylishly musical rethinking of Donizetti’s “Lucia di Lammermoor.”

It is hard to know what to admire most in this beautifully sung, imaginatively staged and evocatively designed production. Perhaps all three at once, in their convergence at the opera’s most famous moment, that expansive and pivotal soliloquy when Lucia, believing her beloved to be faithless and facing the life sentence of a marriage arranged for someone else’s convenience, breaks under the strain in a mad scene worthy of Shakespeare’s for Ophelia in “Hamlet.”

As the distraught Lucia, soprano Susanna Phillips – perched halfway up a precarious-looking staircase that seemed a metaphor for the girl’s state of mind – poured out an emotionally careening monologue borne on the same effortless, mercurial coloratura stream that distinguished her singing throughout the night.

In a voice of shimmering lightness, perfectly expressive of tenderness remembered, Phillips summoned a Lucia of tragic dimensions. Alone on that staircase, with the dumbstruck guests at her wedding party forming a rapt audience below, the soprano traced the pitch and yaw of a spirit broken and in full retreat back to a reality that once nearly was hers.

The stormy ovation that answered Phillips’ mad scene went on undiminished for as long as any I can recall. Yet there was credit aplenty to spread around – to conductor Massimo Zanetti for his fine-tuned support, to the solo flutist who tracked Lucia’s soaring and fluttering vocal line with unfailing agility, to set designer Wilson Chin for his marvelous staircase. And not least to the retired soprano Catherine Malfitano, who in her Lyric Opera debut as director got at the dramatic truth of this melancholy scene just as she did at every other point, from the start.

Typical of bel canto Italian style in the early 1800s, “Lucia di Lammermoor” makes its dramatic progression through a de rigueur series of set pieces: arias, duets and larger ensemble numbers that can seem terribly predictable, not to say artificial. But that’s more a statement of how things are often done than an indictment of the art form. Surely Donizetti himself would have been gratified by the dramatic fluency – indeed the naturalism – Malfitano found in the old formulas of bel canto.

Scene by embracing scene, this “Lucia” unfolded as a deeply satisfying amalgam of astute stage direction and superb singing. That standard was set immediately, in a sequence that began with baritone Brian Mulligan, as Lucia’s politically exposed brother Enrico, declaring double vengeance for his sister’s betrayal and the presumption of her forbidden lover Edgardo, Enrico’s sworn enemy. Mulligan’s virile, ardent singing was the opening burst in what would be a night of vocal fireworks. Yet Mulligan also revealed a man down to his last chip, facing ruin, not a black-hatted caricature but someone deserving of compassion – and the more interesting for it. 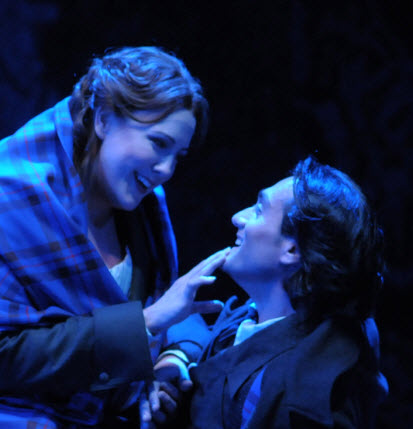 Then in the sparkling voice and winsome form of Phillips, we met the girl whose happiness Enrico holds in his anxious grip. And finally, tenor Giuseppe Filianoti completed the triangle as Edgardo, a man turned from hatred by the discovery of love. Showing the presence and voice of an authentic singing actor, Filianoti transfigured Edgardo from a stock romantic opera type to a character pushed, pulled and ultimately beaten by imponderable circumstance. His warm, focused tenor with its airy top notes added a thrilling component to the production’s rich vocal blend. The role of Edgardo requires a technical range from lyric to heroic, and Filianoti spanned that distance with power and grace.

It was a grand night for the Lyric’s Ryan Opera Center training program, of which Phillips is a graduate – as is bass-baritone Christian van Horn, who brought a patrician voice to Enrico’s friend and pious counselor Raimondo. Tenor René Barbera, a third-year Ryan Center member, displayed a clear, supple sound as Lucia’s designated, and doomed, husband Arturo.

Beyond his wayward winding staircase, Chin’s new set centers on three walls in pale aqua etched with trees back-lit to take on a three-dimensional aspect. Like the staircase, the walls bear their own plausible symbolism as Lucia’s home, prison and tomb. The walls open in Act III, making way for the dark towering form of an actual tomb, that of Edgardo’s ancestors. The stony black tower also serves as backdrop for Lucia’s wedding party. Not the most cheerful of settings — but then again, the lass is pretty gloomy, too.

Photo captions and credits: Home page and below: Soprano Susanna Phillips as Lucia in the mad scene from a new production of Donizetti’s “Lucia di Lammermoor” at the Lyric Opera of Chicago. Middle:  Lucia and Edgardo (tenor Giuseppe Filianoti) in love, before circumstances destroy them both.  Below: A view of the mad scene staircase, designed by Wilson Chin for the Lyric. (Photos by Dan Rest) 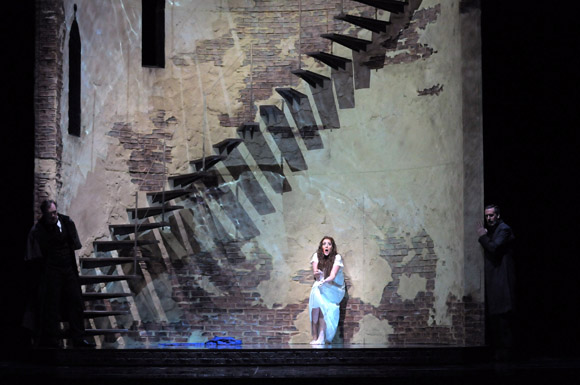