Lawn awaits, stars have got you covered: Downbeat is coming up at Grant Park Fest

Preview: Grant Park Festival launches its 2016 season in a picture-perfect outdoor setting on June 15. Here are some highlights.

The Grant Park Music Festival is the nation’s only free, outdoor classical music series of its kind, one of the glories of Chicago’s summer. Each year the Festival presents ten weeks of lawn concerts to all of Chicago at the Jay Pritzker Pavilion in Millennium Park. 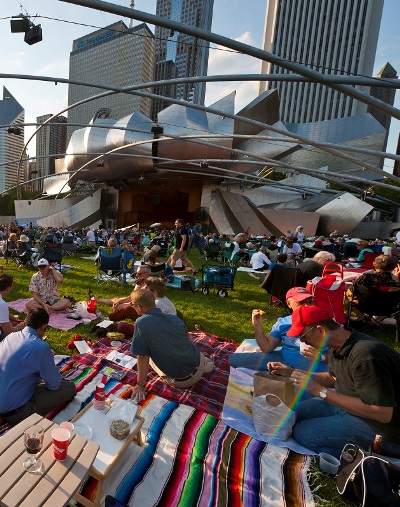 The one-size-fits-all lawn price – free! – means that if you’ve got a blanket, your place under the stars is guaranteed. Beginning June 15, concerts are at 6:30 on Wednesdays and Fridays, 7:30 on Saturdays.

And if you wander over with your lunch in hand Tuesday through Friday, you’re likely to catch the musicians at their regular late morning rehearsals, which are fascinating in their own way.

The stage of the Jay Pritzker Pavilion is framed by the signature billowing stainless steel forms of architect Frank Gehry and a trellis system of suspended loudspeakers reaches over the Great Lawn, delivering  a rich, clean sound.

Check out this promising lineup:

Artistic director and principal conductor Carlos Kalmar leads the Grant Park Orchestra in the June 15 opener featuring Mussorgsky’s popular orchestral showcase “Pictures at an Exhibition,” along with Poulenc’s jazzy Concerto for Two Pianos, with Fabio Bidini and Andrew von Oeyen at the keys. Kalmar, who has been at the helm since 2000, splits his non-summer time between the Oregon Symphony and Madrid’s Spanish Radio/Television Symphony Orchestra and Choir. 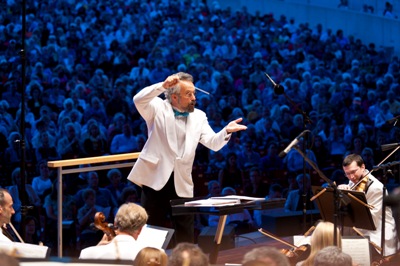 In his Grant Park Festival debut, the Swiss cellist Christian Poltéra plays Shostakovich’s Cello Concerto No. 1, from 1959, one of the greatest works for the instrument, on August 10. Two American vintage classics of the mid-20th century – Roy Harris’ Third Symphony (1939) and Walter Piston’s Second (1943) – round out the evening, Kalmar conducting.

One of the quintessential American symphonies is not by an American. Dvořák’s Symphony No. 9, “From the New World,” will be led by guest conductor Marin Alsop (July 22 and 23). Considering that Dvořák was keenly interested in indigenous American musical styles, it’s fitting that the other works on the concert are by stride composer James P. Johnson and jazz master Duke Ellington. Jazz violinist Regina Carter participates in the Ellington works.

On July 15 and 16, guest conductor Christoph König leads Bruckner’s Symphony No. 4, the “Romantic,” and Haydn’s Symphony No. 55, which has for two centuries had the nickname “The Schoolmaster,” presumably because of a dotted rhythm in the second movement which listeners have likened to a teacher’s wagging finger. On June 24 and 25, Kalmar devotes the entire program to Mahler’s gigantic Symphony No. 6 in A Minor, the “Tragic,” an 80-minute work with lots of winds, percussion and brass.

The Grant Park Chorus joins the Orchestra on June 17 and 18, led by chorus director Christopher Bell in a revival of American post-miimalist composer Michael Torke’s 1996 “Book of Proverbs.” It’s an exhilarating and often hypnotic setting of eight biblical excerpts which was first performed in Grant Park in 2001. (You can sample an excerpt below.)

There is additional mighty repertoire in the Grant Park Chorus’ sights. On July 1 and 2, they sing Martinů’s “The Epic of Gilgamesh,” an oratorio after the great Mesopotamian epic poem from about 2100 B.C., which is believed to have influenced Homer and some stories in the Bible. With Kalmar conducting, the performance features Israeli-born South African bass-baritone Gidon Saks and American soprano Angela Meade, who leaped to fame as a last minute sub at the Metropolitan Opera in 2008 and has been been back many times since. 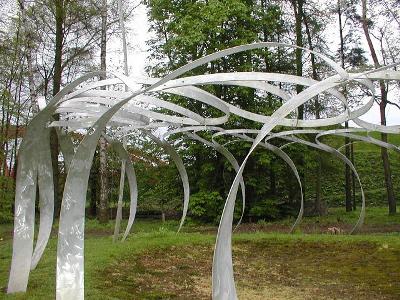 On August 5 and 6, the Grant Park Chorus and Orchestra take on Mozart’s Mass in C Minor, with Kalmar at the helm. The program also includes a world premiere – American composer Michael Gandolfi’s “The Cosmic Garden in Bloom,” the vast musical impression of a famous Scottish garden by Charles Jencks that incorporates modern physics into its design.

On July 20, “LIFE: A Journey Through Time” with music of Philip Glass will be performed while images by National Geographic photographer Frans Lanting are projected on huge screens. Conducor Marin Alsop led the world premiere of the ambitious multimedia project at California’s Cabrillo Festival and will reprise it at the Pritzker. (Check out the video clip below.) The concert also includes Osvaldo Golijov’s cello concerto “Azul,” with Alisa Weilerstein on cello, Michael Ward-Bergeman on accordion, and Jamey Haddad and Cyro Baptista playing percussion. The work was premiered by Yo-Yo Ma in 2006 and Weilerstein has since made it very much her own.

If you’re looking for laughs, on July 6 Buster Keaton’s 1926 silent film The General will be screened. This film, known for its “hilarious Civil War train chase,” gets live orchestral accompaniment. 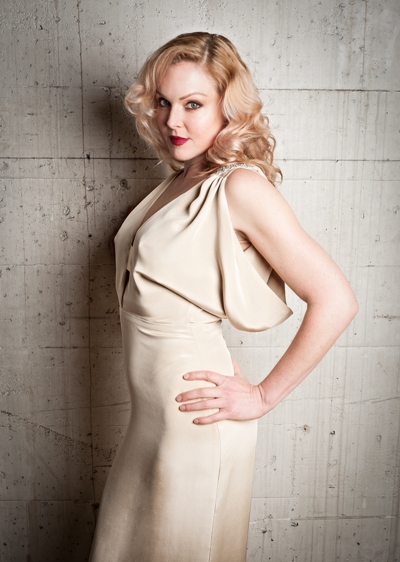 Also a few steps off the classical path is “The Crazy Arc of Love,” a solo show by Storm Large, best known as a frequent guest vocalist with the jazz/pop band Pink Martini. In the June 22 concert, Large sings classics from the American Songbook, backed by Kalmar and the orchestra. “A Cole Porter Celebration” on July 8 and 9 serves up more American popular standards.

The 2016 Grant Park Festival ends with hellish blaze and celestial ascent as Kalmar conducts a concert version of Berlioz’s operatic legend “The Damnation of Faust” on August 19 and 20. Faust is sung by tenor Jonathan Johnson, mezzo-soprano Allyson McHardy is Marguerite, and bass-baritone Stephen Hegedus plays Méphistophélès.